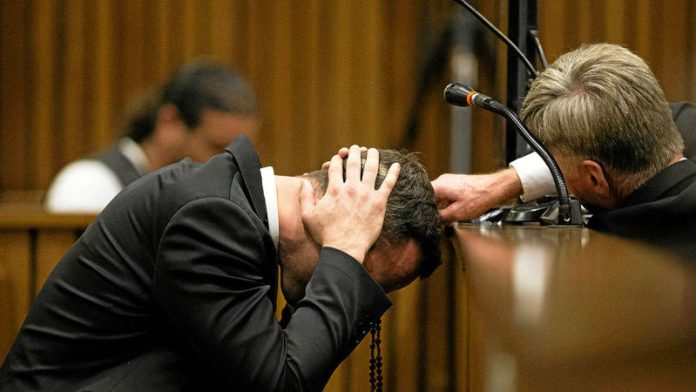 A few weeks before Oscar Pistorius shot Reeva Steenkamp, she sent him a message saying she was scared of his temper, a witness testified on Monday as the Paralympic athlete's murder trial entered its fourth week.

Police cellphone analyst Captain Francois Moller read out transcripts of angry exchanges between the couple on WhatsApp, downloaded from her mobile phone.

In more than one the model complained that Pistorius was short-tempered and overly critical of her.

"I'm scared of you sometimes and how you snap at me and of how you will react to me. You make me happy 90% of the time and I think we are amazing together … but I am not some other bitch … trying to kill your vibe…

"I'm the girl who fell in love with you … but I'm also the girl who gets side-stepped when you are in a shit mood … I get snapped at and told my accent and voices are annoying."

Unhappiness
It was part of a lengthy text she sent him on January 27, expressing unhappiness with his behaviour at an engagement party for one of her friends.

She said Pistorius had criticised her for the way she spoke and for chewing gum, had snapped at her when she stroked his neck and forced her to leave early though she was having fun.

" … You fucked up a special day for me … I just want to love and be loved. Maybe we can't do that for each other. Right now, I know you can't be happy and I'm certainly very unhappy and sad," she added.

In his response, the athlete apologised but complained that she had ignored him and spoken to another man.

As the private messages were read out in the high court in Pretoria in Moller's strong Afrikaans accent, Pistorius cried softly in the dock.

Moller said on February 8 Steenkamp again complained about tension between the couple that arose when they attended a public function. "I can't be attacked by outsiders for dating you, and attacked by you," she concluded.

In an earlier message, sent on January 19 2013, Pistorius wrote to Steenkamp: "When you got back from Tropica, you made it sound like you only smoked weed once."

Steenkamp, a law graduate who became a glamour model, had been away filming a reality TV series called Tropica Island of Treasure.

Tension
Moller testified that he had retrieved nearly 2 000 messages the couple exchanged while they were dating, and stressed that about 90% of these were simply "normal conversation" and many were "loving".

He was due back on the stand on Tuesday for further questioning from state prosecutor Gerrie Nel, who contends that Pistorius shot Steenkamp after the couple had a row.

Pistorius has pleaded not guilty to premeditated murder and claimed that he mistakenly believed he was targeting an intruder when he fired four shots through a locked toilet door in his Pretoria townhouse, fatally wounding Steenkamp. In his plea statement, he denied that they had argued.

Earlier on Monday, a neighbour whose house looks onto that of Pistorius in a plush Pretoria estate, testified that she and her husband had heard three shots, followed by a woman's terrified screams around 3am on February 14 last year when Steenkamp was killed.

"Moments after the shots I heard a lady screaming… terrified, terrified screaming," said Annette Stipp, whose husband later went to Pistorius's home and found him crying next to a dying Steenkamp.

Pivotal
As the trial proceeds, it appears pivotal to the State's case to prove that Steenkamp had time to scream as Pistorius fired shots into the locked toilet cubicle. Nel has been leading detailed evidence suggesting that it is conceivable that he heard his girlfriend cry out but continued to shoot.

Last week the State called a ballistics expert who said tests showed that the first bullet hit Steenkamp in her hip, and the second missed. Two further shots found her slumped in a defensive position, and struck her in the arm and head.

In earlier testimony, the pathologist who performed the post mortem on Steenkamp told the court that it would have been "unnatural" for her not to scream after a bullet shattered her hip.

Kenny Oldwadge, for Pistorius, tirelessly tried to fault Stipp on several counts in cross-examination. He notably challenged her contention that the light was on in the toilet in Pistorius's house, saying her husband had a different recollection and Pistorius had submitted that at the time of the shooting it was out of order.

Pistorius's defence team are arguing that he sounds like a woman when he screams anxiously and that neighbours could only have heard his voice because Steenkamp was too severely injured to make a sound.

The trial is set to continue until May 16. – Sapa