Keeper of an ancient tradition is making history 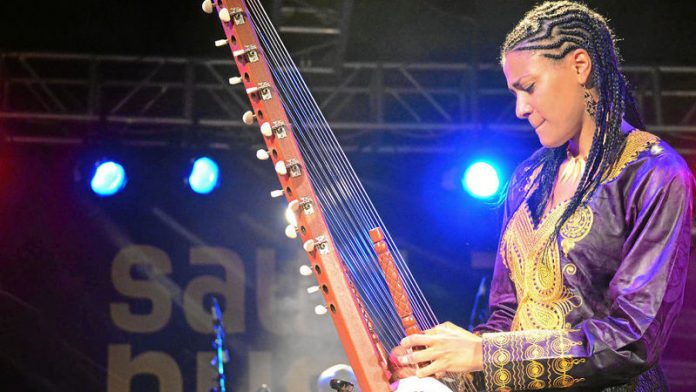 On stage, Sona Jobarteh was using her fingers to pluck expertly at the strings of her kora. Now, off stage, those same fingers tease the shoes from her four-year-old son's feet. Eventually, Jobarteh and her son Sidiki Jobarteh-Codjoe sit side by side. She is visibly fatigued but prepared to face my questions.

For a woman whose duty it is to keep an accurate account of her people's history in the griot tradition of her family, Jobarteh has made it a trademark of her musical career to make history as much as she keeps it.

She is the first woman from a griot family to be regarded as a kora virtuoso and is the co-founder of the first music school in the Gambia dedicated to the study of Manding music. But from her unassuming nature and her open and frank answers, a complete stranger would never guess that she is the granddaughter of the legendary kora player Amadou Bansang Jobarteh.

Jobarteh was first coaxed into learning to play the kora by her grandmother. Between the ages of four and 10, she travelled four times a year with her brother Tunde Jegede from the United Kingdom, where they lived, to the Gambia. There, he and other boys in the family would learn to play the classic kora repertoire from the older men in the family. Her grandmother drew her away from childhood games and sat her with them during lessons.

Jobarteh's British accent jars a bit when she speaks about a time spent in a village in the Gambia learning to play an instrument that is so deeply entrenched in many West African cultures.

At first, one will inevitably try to identify her accent with one of the West African region's countries. That is until she opens up about being a person from the Mandinka tribe. Growing up, her identity was formed by two different world views: the British and the Gambian. Being fluent in the Manding language helped her to keep her bearings. "My language definitely played an important role," she says. "It reminded me that, somewhere in this world, who I was was considered normal."

Now, in her 30s, she is comfortable with her identity as a hybrid. This allows her to draw the best from the classical kora repertoire inculcated in her from a young age and her training at the Royal College of Music and the Purcell School of Music in the UK.

Respect
International attention on Jobarteh has centred on her being the "first female kora virtuoso", but she takes a historically informed and more nuanced approach to the instrument. She says that playing the kora is traditionally and historically reserved for men. So, "you have to respect that and why it's a male tradition".

Without completely disregarding the acclaim she has received for being a virtuoso, she strives to maintain the high standard of playing set by her lineage. "I just want to be a good kora player. To do that you have to adopt the way the instrument has been played rather than think too much," she says.

Ironically, it is the lack of historical rootedness in the country of her father's birth that has inspired her to open the Amadou Bansang Jobarteh School of Music. She says that, "in the Gambia, it's very frustrating because I find myself having to tell people about the history of the kora".

She says that there are players in the Gambia who can solo all day and night on stage but struggle with staple kora songs. The school, which opens in September, is an attempt to reintroduce the traditional way in which the kora was taught and learnt.

As a founder of the school, Jobarteh is planning to relocate to the Gambia later this year to offer her support. She will not be twiddling her thumbs in the time between classes though. What time she has outside of the music school will be spent finalising a project as the producer for Gambian singer Kumba Kuyate's upcoming album.