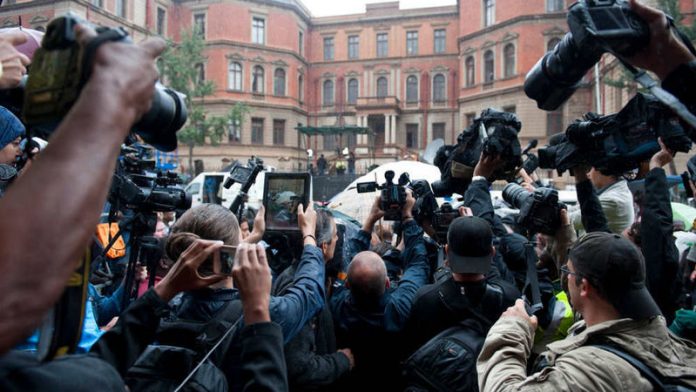 As the coverage of the Oscar Pistorius trial dwindles to the size of a merely medium tsunami, the story provides a stark illustration of how the media landscape is changing under our feet.

The trial has worked its way through cricket bats, screams, blood, exploding bullets, a door, text messages and a great deal of other detail that at some point, one hopes, will answer the central question: Did the Paralympian intend the death of his girlfriend Reeva Steenkamp?

The hard question editors everywhere have to answer daily is: How much of this detail do audiences want?

We are far beyond providing what people need: the levels of interest shown in this story are sustained by sheer drama and the celebrity status of the protagonist.

But judging the level of public appetite is tough. At least one journalist who clearly showed waning interest was the Mail & Guardian‘s Phillip de Wet, who at one point welcomed his Twitter following to the latest day in court: “Now with twice the inconsequential detail to lose yourself in.”

After a series of amusing speculations comparing the styles of prosecutor Gerrie Nel and particularly defence advocate Barry Roux to martial arts (Roux Fu vs Nel-Jitsu), he sighed: “Sadly the #OscarPistorius trial will return on Monday, and apparently every day for the rest of eternity.”

His feed made more interesting reading than many others from the courtroom, which dutifully reflect the minute twists and turns of cross-examination, and even provide followers with a chorus of tweets announcing the riveting fact that the trial is breaking for tea.

For the real Pistorius trial addicts, there is the audio feed, live blogs as well as a dedicated television channel on which you can follow the evidence and watch summaries and commentary.

Hourly radio bulletins used to be unmatched for breaking news – now audiences have these additional channels if they want to follow news stories on a minute-by-minute basis.

This trial, in microcosm, shows how difficult life has become for the daily and weekly newspapers, which need to find a new editorial role. Wits University’s head of journalism Anton Harber has called it a new media ecology.

Some print editors don’t get this, and still run screaming headlines about developments readers already know about. In effect, these are just yesterday’s tweets in huge type.

One possibility would be to push the envelope in the direction of sensational, lurid detail and speculation. Some newspapers have seized the opportunity offered by dramatic elements in the testimony, such as unexplained bloodstains and the like, whereas court reconstructions have offered opportunities to create graphics of the murder that look a lot like a cartoon.

But such opportunities are limited by Judge Thokozile Masipa’s firm indication that she won’t tolerate any misbehaviour by the media.

The smarter newspapers are leaving the breaking news to radio and the new channels, providing summaries, often on inside pages, for those readers with a slightly more restrained interest in the case.

The real opportunity of the new media channels is to allow audiences to choose the level of detail they want. Those who want all the excruciating detail can find it, and others can find the summaries that satisfy them.

In all of this, one needs to have sympathy for the producers of the Oscar Pistorius Trial Channel. Having set up the channel, they are now obliged to produce hour upon hour of material.

It does wear a little thin sometimes, having to rely, for instance, on commentary by a United States lawyer who once worked on the OJ Simpson trial and is therefore, presumably, an expert on sports heroes on trial for murder.

Last week, of course, Pistorius was pushed aside by Nkandla.

One sensed that it was with a sense of deep gratitude that the M&G handed over a huge swath of its news pages to that story, leaving a contribution from the London Guardian on Pistorius’s vomiting to make sure the trial was not completely forgotten.

I did not need more Pistorius, but could have done with a little less Nkandla, too – I didn’t think there was enough strong material to sustain 10 pages.

This week, so far, we’re back to the trial, although media monitoring firm Data Driven Insight reveals dropping interest.

As they gauge the interest of different sections of their audience, print editors need to accept that the trial is merely an indication of the broader changes to the media world.

Breaking news is no longer their turf: they face the more challenging task of finding a new and different terrain for themselves.

The Mail & Guardian‘s ombud provides an independent view of the paper’s journalism. If you have any complaints you would like addressed, you can contact me at [email protected] You can also phone the paper on 011 250 7300 and leave a message.

Franz Kruger
Franz Krüger is adjunct professor and director of the Wits Radio Academy. He is also the ombud for the Mail & Guardian, a member of the South African Press Appeals Panel and the editor of www.journalism.co.za.His book Black, white and grey: journalism ethics in South Africa was published in 2004, while a second title, The Radio Journalism Toolkit, was published in 2006.He is a journalist of some 25 years’ experience and has worked in print and broadcasting in South Africa, Namibia and the UK. Krüger set up the alternative East Cape News Agencies in the 80s and was part of the first management team of the democratic era at the SABC.
Facebook
Twitter
WhatsApp
Linkedin