The gospel of the New Church 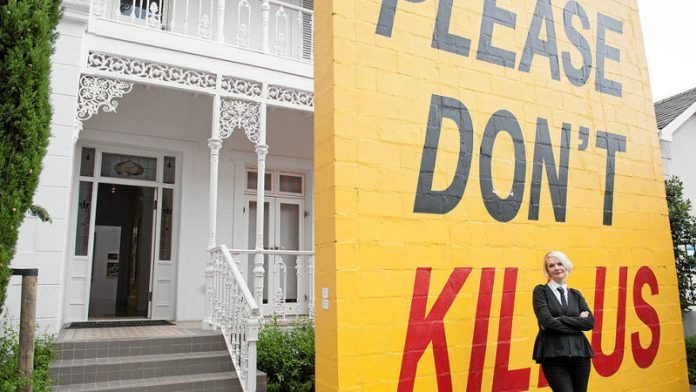 Open since November 2012 and stuffed with a curated selection of works of art made since 1994, "South Africa's first contemporary art museum" is, like the Zeitz, also a gift to South Africa: a private collection committed in perpetuity by a wealthy philanthropist.

It may be dwarfed in size and marketing budget by the new arrival, but the New Church is set to grow. Not that it has an image problem. The space has been widely welcomed in art circles, and draws international and local visitors. It has two successfully curated shows under its belt, a wide range of quality works – and now an impish, sharply intelligent director, sizzling with energy.

Cockerill has been brought in to drive the museum's growth, something its founding benefactor, financier Piet Viljoen, has no time for – never mind a strong aversion to branding it as his own project.

"This museum is not a rich man's toy," Cockerill explains. "It may be an individual man's vision and legacy, but it is not his toy. This is not an ego space. The focus is on the [long-term future of the] museum."

Cockerill comes after seven years at the AVA Gallery, a rare space committed to developing new talent. She resigned some months ago in search of a new challenge. Offers from commercial galleries followed, but "they're not my vibe", Cockerill says. "I'm not interested in commerce. I'm fascinated by it, but I like a more reflective space."

The New Church offered a chance to continue developing both artists and curators, and Cockerill had had a chance to get to know Viljoen and his collection when she curated the museum's last show.

Pop Goes the Revolution poked visitors in the ribs; it teased and whispered bittersweet truths about South Africa. As the curatorial statement read: "The works selected do more than reflect our social landscape – they question it."

Not for above the couch
"We're interested in work that is interesting and irreverent, challenging. We're not buying easy, for above the couch," Cockerill says of the museum's acquisitions philosophy, which – like many of its structures and policies – is with her arrival being developed and formalised.

The New Church collection – which is "constantly" growing – will be driven by criteria related to society and the broader South African community. "We're buying relevant. This means artists can make exactly what they want to make."

Artists need not belong to a gallery's stable, providing newcomers with a useful leg-up and provenance. Cockerill and Viljoen decide jointly on acquisitions and, as budgets swell, will draw in additional experts.

Free of any obligation to sell, the New Church will be able to do surveys and retrospectives. And they will be able to react quickly to trends and events. "It's the biggest bonus we have, actually: that we're small and nimble. We can't do what the Zeitz can do, but we're nimble. They're going to be huge, they can't be [as] responsive to community needs."

Art writer and researcher Mary Corrigall points out that public institutions such as the Zeitz Museum of Contemporary Art Africa and the New Church are "able to fulfil the needs that our government-funded public institutions seem unable to". Besides the generous acquisitions budgets, "they aren't tied up in the red tape and bureaucracy that has stifled the Johannesburg Art Gallery and SANG [South African National Gallery], they can make appointments that will best serve the institution, the public and arts community."

Also, "they are creating the room for proper curated shows that aren't driven by historical collections or are dependent on loans from elsewhere". Corrigall adds that "neither of these institutions seem to be driven by the particular tastes of their benefactors; Mark Coetzee and Cockerill appear to be collecting works that are part of broad discourses in contemporary practice".

Cockerill plans to increase the number of shows a year to at least three, and will continue to draw on outside curators. She also wants to broaden public awareness of the institution. "Do the people of Tamboerskloof realise they have the first contemporary museum on their doorstep? I don't think they do."

Her focus is on showing contemporary African work (over 80% of pieces in the collection itself are South African). There are plans to collaborate with international institutions and private collectors, and borrow suitable works for future shows. A major challenge will be to improve environmental controls (such as humidity regulation) to international standards.

Filling an important gap
Andrew Lamprecht, a senior lecturer at University of Cape Town's Michaelis School of Fine Art, also believes the philanthropist-gifted spaces are filling an important gap, as the state's budget constraints limit what national art institutions can achieve. They can set their own acquisitions policies, and broaden the scope of what's offered to the public.

The New Church's size should also allow it to be more experimental and innovative, Lamprecht says.

Cockerill's first show as director will be opening in May: a survey of Deborah Poynton's paintings, drawn from collectors and institutions. Her spirited approach is instantly visible as she speaks of curating as method acting, and tells of getting David Goldblatt to photograph the artist in her studio in a mock Poyntonesque scene.

Viljoen himself says that the New Church "answers a very selfish need: for me to be able to see the collection I have put together interpreted by people who actually know something about art. A secondary … motivation is to make contemporary art available to the public. South Africa does not have a strong culture of art endowment – either privately or via the government. So I think the New Church collection can play a small role in developing that culture."

At the same time, he welcomes the Zeitz. "It takes my token gesture and multiples it by a big number. The more the merrier, I say."

The New Church, 102 New Church Street, Cape Town. Deborah Poynton's Model for a World: A Survey of 25 Years of Painting opens in early May (date still to be announced). Visit thenewchurch.co for information