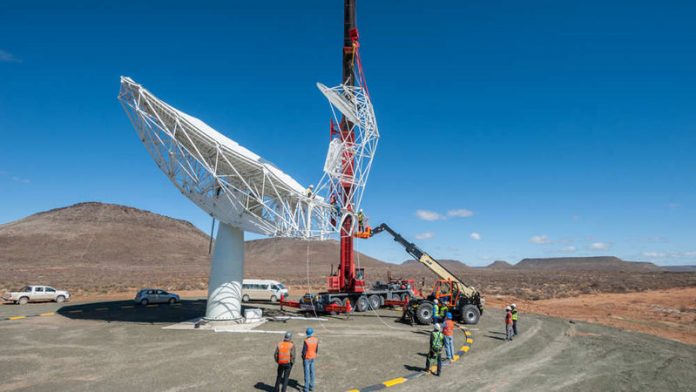 Three days of rain in the Northern Cape lent a surprisingly green backdrop to Thursday's inauguration of South Africa's first MeerKAT antenna, one of 64 that will dot the site.

The white-latticed giant stands nearly 20m above the normally arid and empty landscape, gazing at the prototype seven Karoo Array Telescope (KAT-7) dishes in the distance. But this is only the beginning.

MeerKAT, expected to be complete at the end of 2016, will form part of the Square Kilometre Array (SKA), which will be the largest radio telescope in the world.

The MeerKAT is a South African-funded and designed telescope, with 75% of the components sourced locally, and will be the most sensitive radio telescope of its kind in the Southern Hemisphere.

About five years of observing time on the telescope have already been allocated to more than 500 radio astronomers, 85 of which are from Africa.

An often over-looked fact is that, while South Africa and Australia will share the bulk of the SKA, eight African partners – Botswana, Ghana, Kenya, Madagasar, Mauritius, Mozambique, Namibia and Zambia – will also have satellite stations in their countries.

'It's beautiful'
SKA Organisation director general Phil Diamond, who is responsible for the pre-construction of the SKA, stands in its shadow, looking up at the dish. "It's beautiful. If they can do that with the first, which is always the hardest, they can do it with the next 63," he said.

Science Minister Derek Hanekom, after thanking the many dignitaries who attended the inauguration, said: "What we are witnessing today is the fruit of an idea that was planted many years ago. But most significantly, we have come together over space and time with a clear sense of collective purpose, a purpose that is almost outrageously ambitious and far-sighted."

On Wednesday, South Africa and its eight partner countries met for the first ministerial meeting of the SKA African partner countries, signing a pledge – called the Pretoria Resolutions – to have a formal readiness strategy to co-ordinate astronomy on the continent ready by March 2015, to guide all partner countries.

"We must not passively wait for the SKA to emerge, but to do everything in our partner countries to make sure we'reready to do it," Hanekom said.

This is part of the impetus for the African VLBI Network (AVN). VLBI stands for very long baseline interferometry, in which four or more radio telescopes observe a single celestial object simultaneously and in effect act as one big telescope.

For decades, South Africa's telescope at the Hartebeesthoek Radio Astronomy Observatory was the only VLBI telescope in the country, plugged into European networks. There are hopes to mimic in other African countries what SKA South Africa has achieved at home – building a sustainable and burgeoning pool of engineers, scientists, technicians and artisans who can work on the different aspects of radio astronomy.

Future plans
Since 2005, SKA South Africa awarded more than 590 scholarships and bursaries to students, including many from other African countries.There are plans to convert former telecommunications dishes throughout Africa into radio telescopes, both for training and to create an African array of telescopes.

In 2012, the African Renaissance Fund agreed to put R120-million towards the project. "We won't be there once the telescope is handed over, and those teams need to be able to troubleshoot," Anita Loots, head of the AVN project, previously told the Mail & Guardian.

A telecoms dish in Ghana is in the process of being converted, and there are discussions are underway in Kenya and Zambia to convert dishes in those countries.

Asked what the partner countries would be contributing to the SKA and developing astronomy in their own countries, Botswana's Johnie Swartz, minister of infrastructure, science and technology, said: "The fact that we are here, and that the project has been given the support by heads of state who signed the resolutions, is a clear indication of ownership [of the project]. "[But] we are at different levels of development in this area. As Botswana, we know hosting dishes, but we don’t know where [in the country], and don't know what that will cost. We are still at those very early stages," Swartz said.

In 2012 it was decided to split the SKA between Africa and Australia, which meant that the design of the giant telescope – which will comprise thousands of dishes and antennas – had to be rejigged.

Late last year, the SKA Organisation announced the design consortia, groups responsible for working out how different aspects of the giant telescope will work. "More than 350 scientists and engineers, representing 18 nations and drawn from nearly 100 institutions, universities and industry, have the challenging task to work on the critical design phase," it said at the time.

No certainty yet
South Africa is leading two consortia: the South African site infrastructure consortium, and the assembly, integration and verification consortium, which "includes the planning for all activities at the remote sites that are necessary to incorporate the elements of the SKA into existing infrastructure, whether these be precursors or new components of the SKA", the organisation said.

This means that there is still no certainty about what the telescope will look like, and where the satellite stations will be placed in Africa, which will form part of the second phase of the SKA.

The first phase will be integrating MeerKAT, and Australia's precursor, ASKAP, in western Australia.

The data centre on the South African SKA site was also inaugurated on Thursday. It has been constructed 5m underground so that its computers do not interfere with the incredibly sensitive radio telescope antennas, and the design has made provision for expansion when the MeerKAT becomes part of the SKA.

While officials enthused about the first tangible MeerKAT milestone, engineers and scientists were more cautious.

Justin Jonas, associate director for science and engineering at SKA South Africa, said: “It isn't complete … We have the second antenna hot on its heels. Then we have to test them to make sure they achieve specifications. Once [that] has provided us with the confidence, we'll go into production with the next 62."

He looks at the dish, with a rueful smile on his face. "Everything here," he points at different features of the dish, "is hours and hours, and days and days of my life, [deciding on the exact specifications]. But it is a nice resting point, a vindication."

South Africa is suffering from the plague of political amnesia