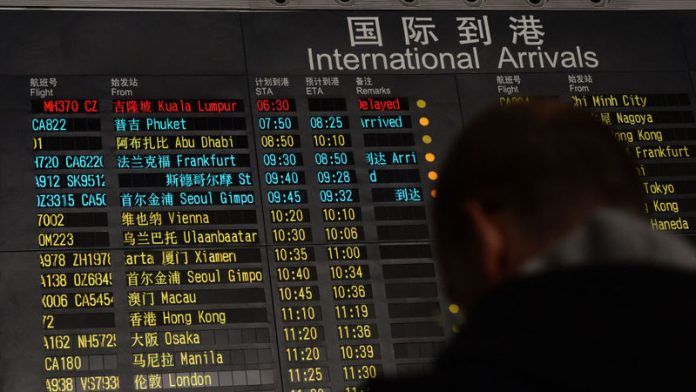 The last words from the cockpit of the missing Malaysia Airlines jet were a standard "Good night Malaysian three seven zero", Malaysian authorities said, changing their account of the critical last communication from a more casual "All right, good night".

Malaysia on Tuesday released the full transcript of communications between the Boeing 777 and local air traffic control before it dropped from civilian radar in the early hours of March 8 as it flew from Kuala Lumpur to Beijing.

The correction comes as Malaysian authorities face heavy criticism, particularly from China, for mismanaging the search, now in its fourth fruitless week, and holding back information. Most of the 239 people on board the flight were Chinese.

"There is no indication of anything abnormal in the transcript," said Malaysian Acting Transport Minister Hishammuddin Hussein, without giving an explanation for the changes in the reported last communication.

"The transcript was initially held as part of the police investigation," he added.

Cut in communications
Minutes after the final radio transmission was received, the plane's communications were cut off and it turned back across Peninsular Malaysia and headed towards the Indian Ocean, according to military radar and limited satellite data.

The search is now focused on a vast, inhospitable swathe of the southern Indian Ocean west of the Australian city of Perth. But an international team of planes and ships have so far failed to spot any sign of the jetliner.

"In this case, the last known position was a long, long way from where the aircraft appears to have gone," retired Air Chief Marshal Angus Houston, the head of the Australian agency co-ordinating the operation, told reporters in Perth.

"It's very complex, it's very demanding and we don't have hard information like we might normally have," he said.

Malaysia says the plane was likely diverted deliberately, probably by a skilled aviator, leading to speculation of involvement by one or more of the pilots. But investigators have determined no apparent motive or other red flags among the 227 passengers and 12 crew.

Routine conversation
The transcript, issued on Tuesday and shared with families of the passengers and crew, covers about 55 minutes of apparently routine conversation, beginning about quarter of an hour before take-off.

The last exchange took place at 1.19am (5.19pm GMT). Nothing appeared to be wrong when Malaysian air traffic controllers told the pilots they were entering Vietnamese air space and received a fairly standard sign-off with call sign in reply.

"Previously, Malaysia Airlines had stated initial investigations indicated that the voice which signed off was that of the co-pilot," said Hishammuddin. "The police are working to confirm this belief, and forensic examination of the actual recording is ongoing."

Informal sign-off
Malaysia's ambassador to China had told Chinese families in Beijing as early as March 12 that the last words from the cockpit had been "All right, good night", which experts said was more informal than called for by standard radio procedures.

Nine ships and 10 aircraft resumed the hunt for wreckage from MH370 on Tuesday, hoping to recover more than the fishing gear and other flotsam found since Australian authorities moved the search 1 100 km north after new analysis of radar and satellite data.

Houston said the challenging search, in an area the size of Ireland, would continue based on the imperfect information with which they had to work.

"But, inevitably, if we don't find any wreckage on the surface, we are eventually going to have to, probably in consultation with everybody who has a stake in this, review what to do next," he said.

Using faint, hourly satellite signals gathered by British firm Inmarsat and radar data from early in its flight, investigators have only estimates of the speed at which the aircraft was travelling and no certainty of its altitude, Houston said.

'Low confidence'
Satellite imagery of the new search area had not given "anything better than low confidence of finding anything", said Mick Kinley, another search official in Perth.

Among the vessels due to join the search in the coming days is an Australian defence force ship, the Ocean Shield, that has been fitted with a sophisticated US black box locator and an underwater drone.

Time is running out because the signal transmitted by the missing aircraft's black box will die about 30 days after a crash due to limited battery life, leaving investigators with a vastly more difficult task. – Reuters, additional reporting by Michael Martina, Jane Wardell, Rujun Shen and Stuart Grudgings

The search relies on a multitude of evidence and analysis that has allowed scientists over the past four years to zero in on likely crash sites.
Read more
World

​France has warned Russia that there would be "consequences" if Moscow did not allow rescuers total access to the site of the Malaysia Airlines crash.
Read more
Advertising