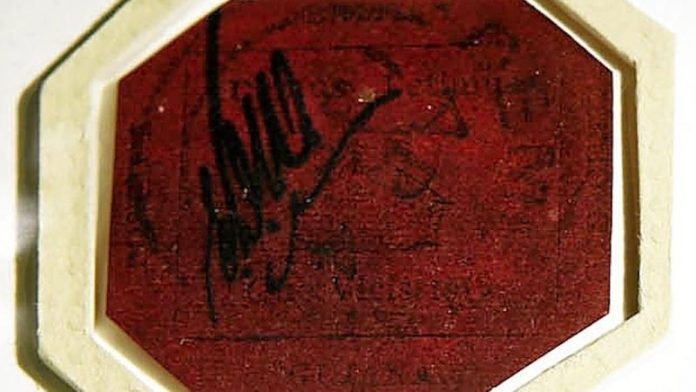 The estimated auction price of a stamp that is coming up for sale at Sotheby's puts art in its place. The 1856 British Guiana one-cent magenta, whose last owner was John du Pont, the wealthiest convicted murderer in American history, is expected to fetch between $10- and $20-million when it is auctioned in New York on June 17.

By comparison, a Francis Bacon portrait of Lucian Freud set a world record for art last year when it sold for $142-million – not exactly chicken feed, and more than 10 times the magenta's top estimate. But the Bacon painting is an imposing large-scale triptych. The stamp is literally the size of a postage stamp, because that's what it is, which could make it the most valuable object by weight and size ever sold.

For the upper price estimate of this unique stamp – thought to be the only one of its kind in existence – you could buy three or four Damien Hirst spot paintings, depending on his current market status, or a self-portrait by Anthony van Dyck. Or how about 12 Jeff Koons teddy bears?

In fact, the eye-watering sums of cash that well-heeled enthusiasts are expected to throw at this stamp reveal the true nature of collecting, dealing, and the surreal nature of the art market.

It is not after all a surprise that stamps are collectible. Do any children still collect stamps? It was considered a respectable preadolescent occupation in the 1970s, but nowadays is probably confined to adults. It has always been associated with rarity and expense at the top end of the hobby. I knew from watching Blue Peter that Penny Blacks were considered valuable long before I was aware that art was a commodity; today a used Penny Black can be bought for about £320.

The magenta, produced for a brief period when ships bringing postage stamps had failed to reach British Guiana, is apparently the most sought-after stamp in the world.

Unique
It is unique and things that are unique are expensive. That has been fundamental to the art market since ancient Roman times. Roman emperors, according to the Latin author Pliny the Elder, paid countless denarii for Greek artistic masterpieces such as the statue of Laocoön and his sons, or a painting by Apelles comprising a single, perfect line.

Pliny the Elder is also a mine of information on the copious range of things humans have considered valuable over the years. Precious metals, ivory, minerals, varicoloured marbles – he lists all the stuff of the Earth that is marvellous and therefore desirable.

Art is just one part of the collectible cosmos. When collections became part of every prince's home life in the Renaissance, "natural" and "artificial" (man-made) wonders were brought together regardless of whether they were "art" or not.

The cabinet of curiosities was born, a place in which you could see a dried mermaid, a cyclops skull, red coral, carved mother of pearl, the sword of Charlemagne, an Aztec obsidian mirror or a painting by Teniers.

The excitement at Sotheby's about the one-cent magenta reveals that cabinets of curiosities are not dead. Modern collectors are not, after all, corporate intellectuals purchasing abstract paintings for a Berlin boardroom. They are driven by the same strange mix of greed, curiosity and aesthetic pleasure that has maddened enthusiasts down the ages: that urge to own something rare. The obsessive desire that drives the crazed antique hunters in the Bogart film The Maltese Falcon (incidentally, a prop from the film recently sold for $4-million), transcends the idea of "art".

As great old collections such as Russia's Imperial Hermitage or Britain's Wallace Collection reveal, rich collectors have always fancied Fabergé eggs and suits of armour alongside their Rembrandts.

Damien Hirst, the most financially canny artist of today, has long recognised this. His animal vitrines are labelled as art, but in reality they have the bizarre appeal of curiosities. A pickled zebra or a precious postage stamp? They could both look good in your study, along with a narwhal horn and the death mask of Napoleon. – © Guardian News & Media 2014