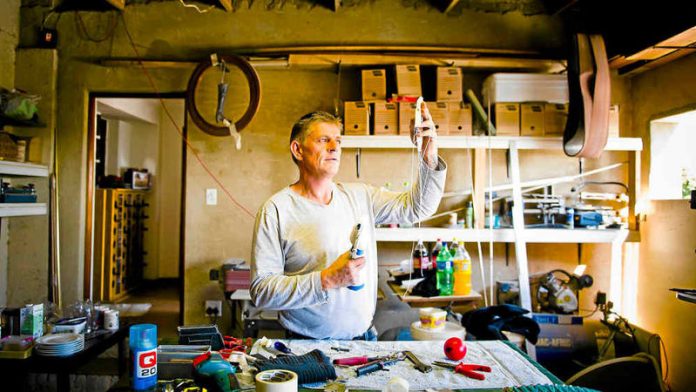 In a five-bedroom house in Centurion, a group of people mill around, chatting, poking, fiddling. They are surrounded by the paraphernalia of their interests – cables, screwdrivers, PC screens blinking with computer code and even a cluster of homemade 3D printers. The back opens into a large garage where onlookers watch someone construct wooden laptop stands.

The contrast appears a bit odd at first – high-tech fiddlers on one end, old-world builders on the other and several 3D printers puttering in between.

But the House 4 Hack (H4H), an innovation hub-cum-tech geek clubhouse established in 2011, creates an air of convergence.

Technology is removing the constraints around traditional innovation and manufacturing; at H4H you can smell the rubber meeting the road.

It was here that Richard van As – who made headlines after building his own low-tech prosthetic hand called Robohand – worked on his design for a new, more durable and easy-to-use 3D printer that would give more people access to the technology.

When Van As lost several of his fingers in a workshop accident, the master carpenter applied his trade to the world of computer-aided design and, with the help of United States-based designer Ivan Owen, he engineered a prosthetic limb that required no electronics. All it needed was the printed parts, a few bolts and some string.

Then Van As released Robohand's designs online for anyone to use and soon after Not Impossible, a nongovernmental organisation based in San Francisco, brought some 3D printers to war-torn Sudan and used Robohand designs to print new limbs for local amputees.

But 3D printers, which build objects by layering heated compounds such as plastic, are not exactly user-friendly, nor do they travel well on the bumpy dirt roads that connect such remote regions to the rest of the world.

Finicky
They are notoriously finicky and require an experienced touch to calibrate and operate – hardly the right characteristics if you hope to change the lives of people in out-of-the-way parts of the world.

For Robohand to make a real difference, Van As needed a more robust machine.

Enter H4H and its gang of tinkerers. They helped Van As to bring about RoboBeast, a 3D printer that can withstand the hard knocks of distant destinations and work to the most rudimentary of instructions, circumventing computer-literacy roadblocks.

A medical technician by trade, Harley rose to acclaim last year when he won an international manufacturing prize for his Reprap Morgan, a 3D printer that can be inexpensively built with easy-to-find components. For Harley, a regular at H4H, it's about exploring technology for the greater good, particularly education.

With Harley and H4H's help, Van As built RoboBeast to make Robohand much more accessible. Van As admitted the first RoboBeast was not exactly cheap – roughly R20 000 – but the point is to expand the potential of, and access to, 3D printing.

To him this is the first step towards something bigger: 3D printers can create a dizzying array of objects, so removing usage barriers means they can make a huge difference in the lives of many people.

In Sudan, the demand for Robohand limbs has been so strong that Not Impossible can't keep up with the shipping requests for printing materials.

"The RoboBeast is the absolute epitome of the spirit and mind of Richard [van As]," said Mick Ebeling from the NGO.

"He’s created a simple-to-use, rugged, robust device and printer that we'll be able to take into the remote areas to make a significant difference.

"That is the perfect encapsulation of who Richard is: taking complex things, simplifying them and then making them incredibly functional and accessible."

It took one man's vision and a group of enthusiasts to make it happen. Both Harley and Van As have rocked the landscape of 3D printing, not to make a buck, but to change the world.

But Van As, enjoying a level of philanthropic celebrity, is not resting on his laurels.

Next, Van As hopes to build a printer large enough to create prosthetic legs.

3D printing: The history
3D printers have been around since the 1980s, but have only emerged in a significant commercial capacity since around 2010.

Although different 3D printers can use a dizzying array of substances to print – from plastic or chocolate to organic materials – the principle is more or less universal.

Using a computer-created 3D design, the printer builds an object by applying layer after layer of a given material.

Some printers use support materials such as powder. These act like scaffolding, allowing for the creation of complicated and intertwined designs that normal assembly techniques cannot match.

After the object is printed, the support material is simply washed or blown away.

Initially 3D printers were used to create replacement components, but as the technology evolved more uses have emerged. Even Nasa is considering the potential of sending 3D printers to the moon, where with the help of robots they could print a lunar base. – James Francis