In Queen’s Mercy, pupils pull back from the brink 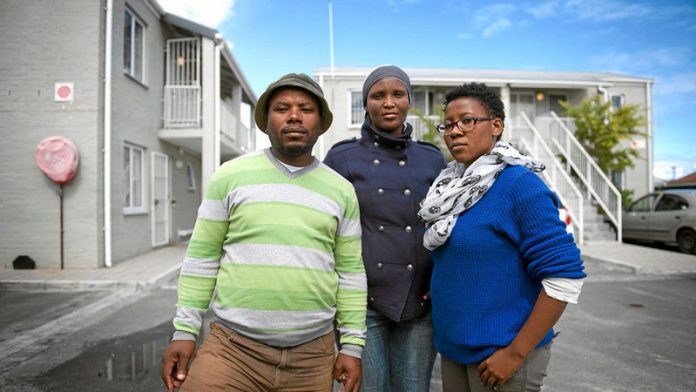 The young men sit tightly next to each other on the beds in their hostel room at Moshesh Senior Secondary School in rural Eastern Cape. It is twilight, and smoke comes in through the broken door from their supper being cooked outside.

"Comrades, you can't give up hope here, you need to keep trying so you can go to university and become engineers, doctors, whatever," says Lumkile Zani, the head of rights organisation Equal Education's community department. "Otherwise do you want to go be miners at Marikana, and get shot?"

The grade 12 pupils he is speaking to are not boys; the youngest is 22 years old. But they have repeated various grades because, as one of them says, "we don't have enough teachers or books".

They sit quietly and stare as Zani speaks. This is the first time anyone has told them they have the right to march to the education department's local office and demand the basics that make a school a school: teachers, textbooks, chairs and desks, running water.

But these are among the things Moshesh School in Queen's Mercy village — a five-and-a-half-hour drive from Durban on roads that sometimes only a 4×4 can handle — still does not have.

Cape Town-based Equal Education and its legal representatives from the Equal Education Law Centre went to the village last week to meet the school's 504 pupils, parents and teachers, following up on court action the centre launched two years ago.

Equal Education's relationship with Moshesh began in 2012, when one of its pupils, Zamuxolo Moutloali, sent the organisation a letter describing his school's absent principal, shortage of teachers, and apartheid-era textbooks.

The organisation tried to get the province's education department to respond to these complaints, but after five unsuccessful months, it went to court ("Eastern Cape pupils sue over appalling learning conditions", Mail & Guardian, November 30 2012).

Last year, it reached an out-of-court settlement, later made into a court order, in which the department agreed to provide continuing support for the acting principal and the school governing body, fill vacant teacher posts, and provide all the textbooks pupils need, among other commitments.

But the department did not keep its promises, Equal Education says.

The M&G meets Moutloali and another pupil, both in grade 12, returning from a dam carrying water in two 20-litre buckets.

There is no running water at the school, so they take turns to fetch water once a day. Five pupils share it to wash themselves in basins in the middle of their dormitory.

When an Equal Education task team first went to the school in 2012, "we learned what we deserve [to have] in a school", Moutloali says. "That we must work together, write letters, speak about the things that are wrong here."

Back in the dormitory, Zani speaks fast in isiXhosa. "I know ukuthi [that] it's frustrating, but you need to organise yourselves … You have the power to stand up against this."

The men rub their faces and look at each other sideways. "The district won't listen," says one. "It will just shout, 'Ah Moshesh … you always failing.' "

"We fight, and they will expel us," says another.

"They will close the school," says a third.

"No," Zani says again. "We are not saying you must fight against the district. Kodwa [but] it is your right to march to the office."

It is dark by the time we leave the hostel. We walk to the road past the stinking pit toilets and unused classrooms filled with trash.

The acting principal's office light is still on. Mabotle Malete took up the position in May last year, the Equal Education Law Centre says, but she has still not received an appointment letter and is not being paid an acting principal's salary.

She is inside the office, where a few weeks ago two horses were found standing next to the photocopier.

Earlier in the day, another staff member, who asked to remain anonymous, told the M&G that six teachers left the school last year because they weren't paid their salaries for months.

"But they are still recorded as receiving a salary from this school, so as far as the department is concerned, we have all the teachers we need."

"I feel like leaving every day. It is a hopeless situation," the teacher said.

What keeps you here? "God," she said. "And the learners' enthusiasm."

Precillar Moyo, an attorney at the law centre, says the only thing the department has done right is appoint an acting principal.

"But no amount of effort on her part will get the vacant teacher posts filled.

"That is the department's job and, since August 2013, it has done nothing to address this," she says.

Equal Education's parliamentary liaison officer, Hopolang Selebalo, says part of her job is to monitor the underspending of education budgets.

"At Moshesh, I saw the effects of this on actual people. It felt very personal and painful. When the acting principal told us that 'we have to look in the storeroom for things to make chairs out of', I thought, 'God, she should not have to be thinking about things like this'."

On the last day of the visit, the activists have one final meeting at the school before they leave. They sit in a classroom with four members of the school's governing body.

First, chairperson Valashiya Mthwalunzima says we should pray. Afterwards, he confirms that the department has not fulfilled its promises to the school.

Stories about what this actually means on a daily basis for parents, pupils and teachers stream from them. "The department sends letters demanding papers and marks," says a staff member, who also asks to remain anonymous.

She starts to cry. "We don't even have teachers, so how …" she trails off, unable to complete her question.

Some of the activists are also crying now. "The acting principal is going to die from all the hard work," Mthwalunzima says.

But there is still hope that the department will meet its obligations, Moyo assures them.

"The court order allows Equal Education and the pupils to return to court after giving notice to the department should it not address its noncompliance with the settlement order. Returning to court is an option."

Neither the national nor the provincial department of education had responded to our questions by the time this edition went to print.

Standards still a priority for schools

In democratic South Africa's early years, much civil society activism focused on school fees and access. Now, more than 95% of South Africa's 12-million children of schoolgoing age have places in schools, and activist focus has turned to quality.

Among the many civil society organisations that have resorted to litigation are the Legal Resources Centre, Section27, the Centre for Child Law and the Centre for Applied Legal Studies.

"When we started Equal Education (EE) in 2008 we wanted to bring a different response to the fact that the majority of black working-class children were in schools that were failing," said Yoliswa Dwane, founding member and head of EE's policy, communication and research.

"It's grown into this organisation that helps organise the working class so they can fight for their own rights — but we've never seen ourselves as people coming in riding white horses to save the working class. We try to teach pupils how to empower themselves."

The Equal Education Law Centre is an offshoot of EE but operates as an independent public-interest law institution.

Pupils use a network of EE members to tell the organisation about problems. "That's the power of a membership-based organisation," Dwane said.

The 33-year-old has seen the uglier side of education infrastructure — holes in a prefab classroom in the Western Cape that are big enough to walk through, and a toilet at an Eastern Cape school that was being used as a staff room.

"We have done a lot in and out of Parliament. We write comment pieces, monitor and track [government] spending, organise marches and creative forms of protests.

"We spend hours at night reading policies and preparing court papers, but you do it with excitement because you know you are preparing for something much bigger than yourself." — Victoria John