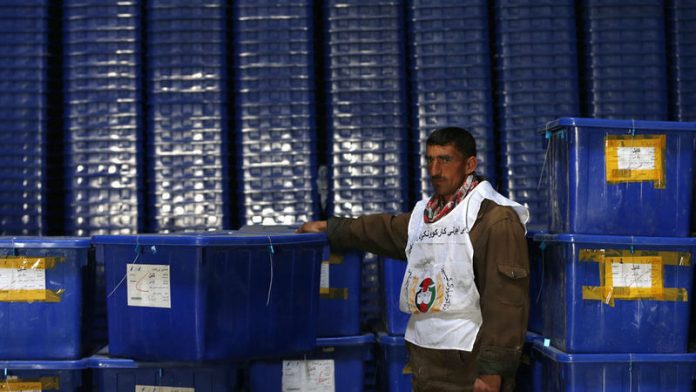 Long queues of voters waited throughout the day outside many of the 6 400 polling centres before the prolonged process of counting began, with preliminary results not due until April 24.

The country faces a politically-testing few months as it undergoes its first democratic transfer of power, and many Afghans fear a repeat of the fraud scandals that marred the last presidential election in 2009.

If no candidate wins more than 50% of the vote in the first round a run-off is scheduled for late May.

There were no major terror attacks during polling, and organisers hailed the election a major success, despite complaints that a shortages of ballot papers had denied some citizens to right to vote.

"Today, I can claim that the enemies of Afghanistan have failed in their plan to disrupt the election process," Interior Minister Omar Daudzai told reporters.

"People's participation in the election was unprecedented and it was a huge success."

Initial predictions
The final turnout could exceed seven million, the head of the Independent Election Commission (IEC), Ahmad Yusuf Nuristani, said, though this was a preliminary estimate and may change. Initial predictions in 2009 proved inaccurate.

Around 13.5-million people were eligible to vote, putting the estimated turnout above 50% – a significant increase on 2009, when only around a third of voters cast ballots.

There was no clear favourite among the front-runners to succeed Karzai – former foreign minister Zalmai Rassoul, Abdullah Abdullah, who was runner-up in the 2009 election, and former World Bank academic Ashraf Ghani.

The open nature of the race coupled with a massive security operation to thwart Taliban attacks may have contributed to the high turnout.

The Taliban had urged their fighters to target polling staff, voters and security forces, but there were no major attacks reported during the day.

In Kabul, hit by a series of deadly attacks during the election campaign, hundreds of people lined up outside polling centres to vote despite heavy rain and the insurgents' promise of violence.

"I'm not afraid of Taliban threats, we will die one day anyway. I want my vote to be a slap in the face of the Taliban," housewife Laila Neyazi (48) said.

Interior Minister Daudzai said said four civilians, nine police and seven soldiers had been killed in violence in the past 24 hours, and added that many attacks had been foiled, without giving further details.

Attacks or fear of violence had forced more than 200 of a total 6 423 voting centres to remain closed.

The day before the poll, Associated Press photographer Anja Niedringhaus was shot dead by a police commander in eastern Khost province.

She was the third journalist working for international media to be killed during the election campaign, after Swedish journalist Nils Horner and Sardar Ahmad of Agence France-Presse.

Afghans have taken over responsibility for security from US-led forces, and this year the last of the Nato coalition's 51 000 combat troops will pull out, leaving local forces to battle the resilient Taliban insurgency without their help.

In the western city of Herat, a queue of several hundred people waited to vote at one polling station, while in Jalalabad in the east, voters stood patiently outside a mosque.

Voters also lined up in Kandahar city, the southern heartland of the Taliban, with some women among the crowd in contrast to the 2009 election, when turnout was very low due to poor security.

The country's third presidential election brings an end to 13 years of rule by Karzai, who has held power since the Taliban were ousted in 2001.

Massive fraud and widespread violence marred Karzai's re-election in 2009, and a disputed result this time would add to the challenges facing the new president.

The election may offer a chance for Afghanistan to improve relations with the United States, its principal donor, after the mercurial Karzai years.

Relations fell to a new low late last year when Karzai refused to sign a security agreement that would allow the US to keep around 10 000 troops in Afghanistan to train local forces and hunt al-Qaeda. – AFP