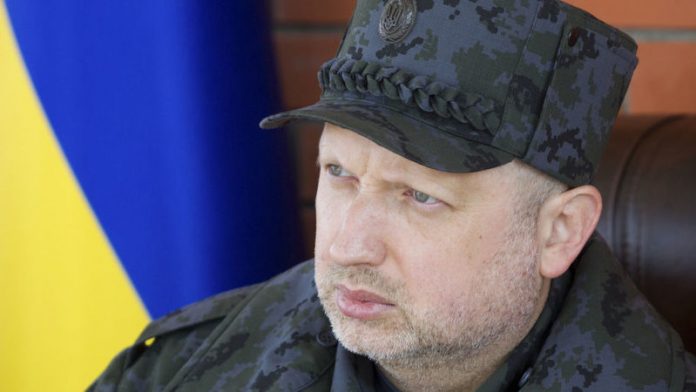 Oleksander Turchinov said in a televised address to the nation that Russia was waging a war against Ukraine by sowing disorder in the east of the country, but he offered not to prosecute any militants who gave up their weapons by Monday morning.

Referring to the death of a state security officer and the wounding of other members of law-enforcement bodies in an earlier clash with pro-Russian militants near the town of Slaviansk, he said: "The blood of Ukrainian heroes has been shed in a war which the Russian Federation is waging against Ukraine.

"The aggressor has not stopped and is continuing to sow disorder in the east of the country," he said, referring to a rash of attacks on state buildings by pro-Russian militants in towns in Russia-speaking areas of the east.

Kiev authorities say the separatists rebellions have been inspired and directed by the Kremlin, a charge Moscow denies.

"The National Security and Defence Council has decided to launch a full-scale anti-terrorist operation involving the armed forces of Ukraine," he declared.

"We will not allow Russia to repeat the Crimean scenario in the eastern regions of the country," referring to Moscow's annexation of the peninsula following its take-over by pro-Russian militants. – Reuters

Citizens have for a year protested against the president seeking a third term in office despite a two-term limit. Many have been killed — and 90 more people died in this week’s crackdown
Read more
Cartoons