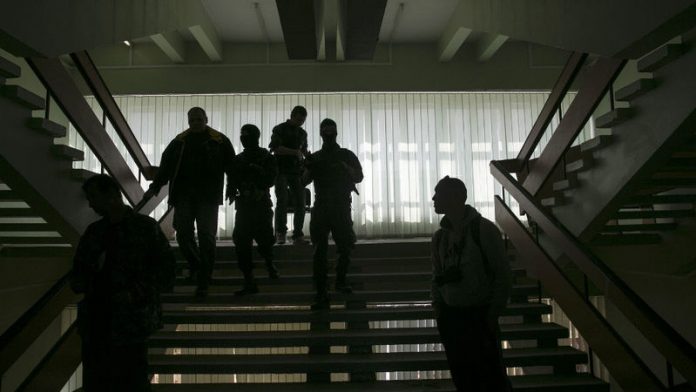 The pro-Western government in Kiev blamed Russia for what it called the kidnapping on Friday of the monitors from the Organisation for Security and Cooperation in Europe (OSCE).

The separatists said they suspected the observers of spying; Ukraine said they were being used as human shields.

Since Ukrainians toppled their pro-Russian president in February, Russia has annexed Ukraine's Crimean peninsula and massed tens of thousands of troops on the country's eastern border. Nato has responded by sending reinforcements to Eastern Europe, in the gravest East-West crisis since the Cold War.

Earlier on Saturday the Group of Seven major economies announced they had agreed to impose more sanctions on Russia, which they believe is bent on destabilising its former Soviet neighbour and possibly grabbing more territory. Diplomats said the United States and the European Union were expected to unveil new punitive action against Russian individuals from Monday.

Russia denies orchestrating a campaign by pro-Moscow militants who have seized control of public buildings across eastern Ukraine. It accuses the Kiev government of whipping up tensions by sending troops to root out the separatists.

The OSCE sent more monitors on Saturday to seek the release of those detained in Slaviansk, a city under the separatists' control. Those being held are from Germany, Sweden, Denmark, Poland and the Czech Republic.

Vyacheslav Ponomaryov, de facto mayor of Slaviansk, told reporters: "They were soldiers on our territory without our permission. Of course they are prisoners."

He said the separatists were ready to exchange the captured monitors for fellow rebels now in the custody of the Ukrainian authorities.

"Prisoners have always been coins to exchange during times of war. It's an international practice," he said.

Ukraine's state security service said the OSCE observers – part of a German-led military verification mission deployed since early March at Kiev's request – were being held "in inhuman conditions" and that one needed medical help.

A spokesperson for the Vienna-based organisation, of which Russia is a member, said the OSCE had been in contact with "all sides" since late on Friday but had had no direct contact with the observers.

The Russian foreign ministry said it was working to resolve the crisis, but blamed Kiev for failing to ensure the OSCE mission's safety in "areas where the authorities do not control the situation and where a military operation against residents of their own country has been unleashed".

Russia's Komsomolskaya Pravda newspaper released a video interview with a man it identified as Ivan Strelkov, a militia leader in Slaviansk, accused by Ukraine's security services of being an employee of Russian intelligence.

He suggested the monitors might have been using their diplomatic status "to carry out reconnaissance of the resistance positions, for the benefit of the Ukrainian army".

It is standard practice for serving military officers to be seconded to OSCE missions.

German Foreign Minister Frank-Walter Steinmeier discussed the Ukraine situation with his Russian counterpart Sergei Lavrov by telephone on Saturday "with an accent on possible steps to de-escalate the situation", the Russian ministry said.

Steinmeier said Lavrov had offered his backing, which he welcomed.

In a separate call with US Secretary of State John Kerry, the Russian minister said Ukraine must halt military operations in the south-east of the country in order to defuse the crisis.

Kerry called on Russia to publicly support Ukraine's efforts rather than denigrate them, said a senior US State Department official. Kerry told Lavrov that Russia's provocative troop movements on Ukraine's border, its support for separatists and its inflammatory rhetoric are undermining security in Ukraine, the source said.

"The only reason is to provoke Ukraine … and to accuse Ukraine of waging war against Russia," the prime minister told reporters before cutting short a visit to Rome.

Washington deployed 150 paratroopers to Lithuania on Saturday. A total of 600 US troops have now arrived in Poland and the former Soviet Baltic states in a bid to reassure nervous Nato allies.

"As threats emerged, we see who our real friends are," Lithuanian President Dalia Grybauskaite said as she greeted the troops at the Siauliai air base.

Without mentioning Russia, she said the presence of US troops would "repel those who encroach on stability in Europe and peace in the region".

"The numbers are not important. If just one of our guests is harmed, this would mean an open confrontation, not with Lithuania but with the United States of America."

US officials said new sanctions targeting "cronies" of President Vladimir Putin could be unveiled as early as Monday unless Russia moved fast to defuse the crisis.

In a joint statement, G7 leaders said Russia had not taken any concrete steps to implement an accord, signed earlier this month in Geneva, intended to rein in illegal armed groups.

"Instead, it has continued to escalate tensions by increasingly concerning rhetoric and ongoing threatening military manoeuvres on Ukraine's border," it said.

"We have now agreed that we will move swiftly to impose additional sanctions on Russia."

But it added: "We underscore that the door remains open to a diplomatic resolution of this crisis."

Senior EU diplomats will meet on Monday to discuss the next steps and are expected to add 15 more names to a list of Russians subject to asset freezes and a travel ban.

"You can expect there will be more entities named and some individuals," said a source in a G7 government. The entities would include one or more financial institutions, the source said. "This is about hitting people's pocketbooks."

Putin acknowledged for the first time this week that sanctions were causing difficulties for Russia, though he said the impact was not "critical".

Standard & Poor's cut Russia's sovereign long-term debt rating on Friday, making it more expensive for the government to borrow money. That forced the central bank to raise its key interest rate to limit a fall in the rouble.

Russian banks have been moving funds out of foreign accounts in anticipation of sanctions.

Russia has threatened to cut off gas to Ukraine, which would have a knock-on effect on customers further west because many pipelines transit the country.

Slovakia said on Saturday it had reached an agreement with Ukraine on opening up limited reverse flow of natural gas from central Europe to Ukraine. – Reuters