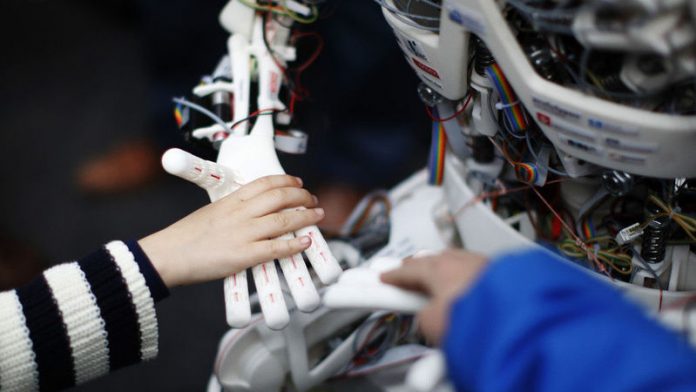 Cinema audiences are subjected to a mind-boggling fusion of the human consciousness with computing power in the Johnny Depp blockbuster Transcendence, but the sinister-seeming world of artificial intelligence is entering the mainstream with Silicon Valley upstarts Google and Facebook.

The film, released last weekend, has been savaged by critics against the backdrop of a futuristic arms race in the real world. Google and Facebook have joined Amazon in buying up drone firms to beam internet connections from space, investing in robotics, machine learning and virtual reality technology. But the realm of artificial intelligence could contain the greatest prize, achieving a union of man and machine that is often referred to as "the singularity" – a phrase first used by the American futurologist Ray Kurzweil. The accepted wisdom is that such a leap, if it can happen, is at least 30 years away.

Experts now argue that the moment is closer than you think and Kurzweil is one of the figures accelerating our encounter with the future, as Google's director of engineering.

Turning the classic industrial investment model on its head, consumer technology groups are using their cash mountains to superfund areas of research that were until now the preserve of governments, defence companies and academics. Over the past year, Google has bought seven robotics companies, including Boston Dynamics, whose previous work building humanoid machines was largely paid for by the US military. It has bought firms that specialise in natural language processing, gesture recognition, and more recently in machine learning, highlighted by the acquisition of British startup Deepmind – bought in January for $400-million.

"Silicon Valley's involvement is creating right now an enormous acceleration," says Per Roman, a founding partner at technology investment bank GPBullhound. "It is turning into a real talent magnet. It is often small teams that come up with breakthrough inventions and you are much more willing to take the risk if there is a chance you could get bought rather than ending up in a dark room in some military agency."

Internet from the sky
And it is not just AI that is persuading Google to open its chequebook. Like Facebook, it is also investing in beaming the internet from the sky. Google has acquired drone maker Titan Aerospace, while Facebook now owns Somerset based Ascenta. Facebook has also splashed out $2-billion on Oculus, a maker of virtual reality headsets. Amazon, meanwhile, has held up the prospect that one day its goods could be delivered by air to our doorstep before we have even realised we need to order them.

Last year's $3.2-billion purchase of Nest, a designer of internet connected smoke alarms and thermostats, suggest Google's ambitions are domestic. "It looks to me like they want to take the internet out of the desktop and put it into our everyday lives," says Sharkey. "Their acquisition of Nest was very telling. Add to that robotics and AI companies and you have the internet walking around in the world alongside us."

For those struggling to understand why Google or Amazon should want to invest in self driving cars, internet drones and robotics, the answer is data. Masses of it. The parking metre in your street, the collar on your cat, the thermostat in your home will emit signals that can be picked up from anywhere, and Google will be listening.

If Silicon Valley's best minds succeed, their software will not only be listening, it will be understanding and anticipating. When it comes to mundane chores such as stocking the fridge or ordering birthday presents, software will be doing our thinking for us.

'Living in singularity'
DeepMind's technology draws on a user's browsing behaviour, gathering information on their interests and questions, to recognise patterns, learn about human behaviour and make recommendations. According to co-founder Mustafa Suleyman, this could be used to suggest purchases, such as books or films.

"All these concepts that people have been talking about for 20 years are happening at large scale now," says technology investor Dharmash Mistry, founder of data driven cosmetics business Blow.

"When you use Google search you have to work out what you are looking for and the words to use to find it. That will move to the search engine having data on you to give you customised searches. A lot of healthcare is dealing with an ailment once you have it. This new model is about getting you to prevent these issues before they happen. After the glass of wine and meal, your smartphone will book you into the gym."

For some scientists, such as wearable computing pioneer Thad Starner, who is a key engineering figure behind Google Glass, man and machine are already merging. "I would argue that we're currently living the singularity," he said in a recent interview. "Where the tool stops and the mind begins will start becoming blurry." – © Guardian News and Media 2014