Colombia bites the hands that feed 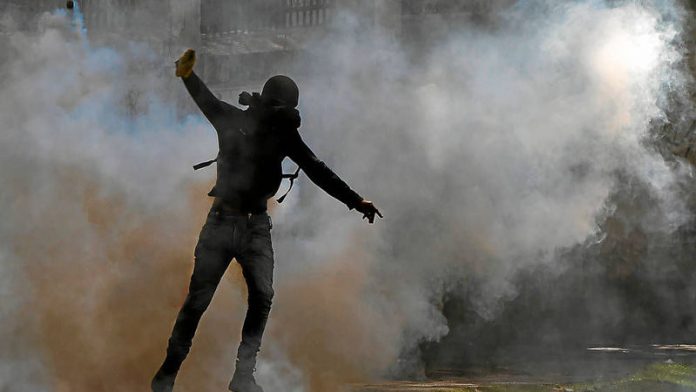 The Colombian state is deploying tanks, troops and riot police to counter a farmers’ strike that aims to choke food supplies before the coming presidential election on May 25.

Rural workers are taking to the streets for the second time in less than a year because President Juan Manuel Santos has failed to deliver on promises of rural reform.

Fierce clashes marked last August’s protests as riot police used rubber bullets and teargas in several ­agricultural areas where thousands of farmers had blocked roads. About 20 people are said to have died during confrontations, which lasted until Santos shook hands with campesino leaders and pledged to act on several of their demands.

Anxious to avoid a repeat of this disruption, the state sent in military reinforcements on Monday to try to ensure key transit routes remained open, but local reports suggested farmers had blocked roads in potato-growing areas of Medellín and the coffee-producing region of Huila. Students in Bogotá are also said to have joined the protests.

Although a few windows have been smashed, the government said the demonstrations had so far been peaceful. At a “campesinos’ summit” earlier this month, farmers’ leaders agreed that a new round of protests was necessary. Agricultural groups are angry about free-trade agreements that make it difficult for them to compete with cheap, less ­ecofriendly foreign imports.

Among their demands are debt forgiveness, cheaper fertilisers, a halt to mining projects and more fuel subsidies to prevent farmers from slipping into bankruptcy.

Ministers say the farmers need to be more patient because many of the reforms are being introduced. “Our negotiations are producing results,” Interior Minister Aurelio Iragorri told a press conference.

A more sinister motive was alleged by Defence Minister Juan Carlos Pinzón, who claimed that left-wing Farc rebels had organised the rural unrest to put pressure on Santos before the election. The president is a favourite to win, but his lead has recently slipped to single digits.

Campesino leaders deny such links and say the state has used similar allegations in the past to try to discredit civil protests. Rural activists say their protest is inspired by a desire to alleviate the pressure on poor farmers, who are near the bottom of one of the most unequal societies in the world.

“The countryside has been abandoned by the state in favour of big companies. That’s why we block the roads and protest,” said Jimmy Torres of Conciencia Campesina in Cajamarca. He said more than 7 000 people from the town had ­participated in last year’s strike.

Cielo Báez, a campesino leader and eco-farm owner in Cajamarca, said the latest protest was inevitable because the government had failed to act on any of the demands made by the strikers last year. But she urged the movement to change strategies.

“My hope is not that they block the road, but they refuse to ship out food. If we take to the streets, we run the risk of turning campesinos into cannon fodder. If we withhold food deliveries, the urban areas will feel the impact.” – © Guardian News & Media 2014