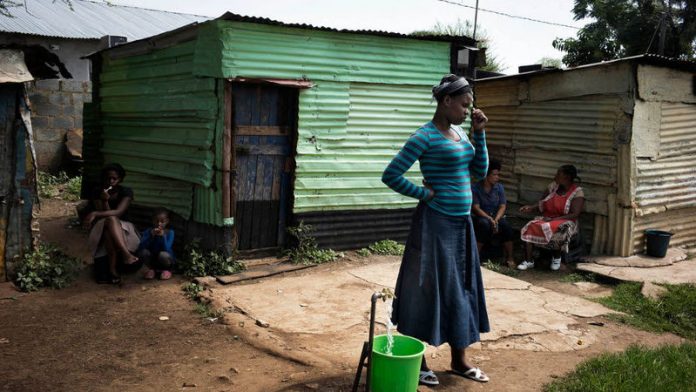 The Marikana massacre served, among many things, to highlight the plight of the migrant miners who live in poverty and work in the Rustenburg area.

How have these workers and their families survived with no money during the strike, now in its 14th week? What keeps them going? The striking miners have themselves provided two answers. Solidarity with their 34 slain comrades is the first one. The second is a deeply seated sense of injustice arising from their lived poverty and the reported riches of the mine bosses and owners.

The sheer magnitude of general South African inequality is so obscene as to disturb the privilege of all members of Parliament: all parliamentary parties now explicitly recognise the threat to social stability of mass unemployment, mass poverty and mass inequality.

There are about 48 700 high-net-worth individuals in South Africa. Their combined net wealth is R2.103-trillion – an average of R43.18-million each. At the other end of the scale is a median gross monthly wage of R3 300.

In the still-innocent days of the “new” South Africa, Parliament addressed employment inequality and took legislative measures to contain and indeed reduce the gap between the highest-paid managers and the rest. That was in 1998.

Although the Employment Equity Act of 1998 (EEA) is well known, it contains an almost unknown section dealing with what it calls “income differentials”. This section 27 has been so well hidden during the 16 years of the EEA’s very public existence that it merits quoting at some length:

“(1) Every designated employer … must submit a statement … to the Employment Conditions Commission … on the remuneration and benefits received in each occupational category and level … ;

“(2) Where disproportionate income differentials are reflected in the statement … a designated employer must take measures to progressively reduce such differentials, subject to guidance as may be given by the minister as contemplated in subsection (4);

“(3) The measures referred to in subsection (2) may include

b) compliance with sectoral determinations made the minister … ;

c) applying the norms and benchmarks set by the Employment Conditions Commission;

There’s a simple reason for the invisibility of section 27: except for one administrative measure, none of its many provisions have been implemented. The government, the department of labour and the Employment Conditions Commission (ECC) have been singularly successful in avoiding their statutory obligations.

For a decade, employers have indeed been submitting the statements required in subsection 1, but the report form, EEA4, is not constructed in a way that discloses income differentials between different occupational levels, that is, between high and low-income earners in a company. In explicit breach of section 27, it deals only with wage discrimination by gender and the four apartheid categories “within the various occupational levels”.

From research suggesting that inequality has got worse with time, especially within each so-called race group, we can infer that employers have not “taken measures progressively to reduce differentials”; that “sectoral determinations” and “skills development legislation” have not included measures to reduce differentials between the top and bottom of the pay structure; that “the norms and benchmarks set by the Employment Conditions Commission” have not been applied because the ECC has not done the “research and investigation” required to set any norms and benchmarks; and, finally, that the minister of labour has not given any of the required guidance on the matter.

It is not hard to find probable reasons for these failures. MPs, their provincial counterparts, municipal councillors, judges, departmental director generals and their senior management, as well as the senior managements of all state-owned enterprises have a vested interest in preserving their exorbitant salaries. So, too, of course, do the captains of industry.

And all of them, whether from the public or private sectors, sing warnings about salary caps not being investor-friendly when “everyone” is supposed to agree that foreign investment is essential for the wellbeing of the country.

Far less easy to explain is the position of labour, especially – but not confined to – Cosatu.

Section 27 was included in the EEA only at Cosatu’s insistence. Indeed, Cosatu felt so strongly about an Equity Act having to address income differentials (then still called the “apartheid wage gap”) that it threatened to oppose the whole EEA unless the ECC tackled the matter. (One of the authors of this article was an ANC researcher for Parliament’s labour committee at the time and can attest to the force with which Cosatu made its demands.)

Cosatu spoke of an income differential of no more than eight to one, but accepted that the ratio would be subject to further negotiation within the ECC.

Why, then, has Cosatu and its 21 affiliates, along with the other main trade union federations and their respective affiliates, remained silent in the face of the commission’s silence? Why has there been no challenge to the comprehensive failure – indeed, the scandalous refusal – to implement the various provisions of section 27?

Marikana suggests one possible answer. The National Union of Mineworkers lost its dominance in the platinum belt because its leadership, including its shop stewards, had lost contact with the rank and file.

An 8:1 salary cap would mean a salary cut for most of the top trade union echelon, as it would for other top earners. It would also mean a block to the aspirations of

those trade unionists not yet in the top tier. This would not be a problem for some, but it would be unwelcome to most of the union bureaucracy.

Unions such as the National Union of Metalworkers of South Africa recognise Marikana as a timely wake-up call.

Once the crisis in Cosatu has been settled in one way or another, Numsa might pursue the implementation of section 27, which is, however, among the proposed amendments to the current EEA Amendment Bill.

The proposed section 27 amendment confuses the class-based vertical differential between the top and bottom of the income structure with an additional horizontal colour-coded one of differentials within each wage band.

Cosatu, now preoccupied with other matters, doesn’t seem to have said anything about this amendment, which gives an entirely different meaning to what it achieved in 1998.

The miners, in the meantime, remain on strike, driven by their poverty and the wealth of those who directly benefit from their labour; the 1% minority with an income differential of up to 100 to one.