How Gareth found his groove 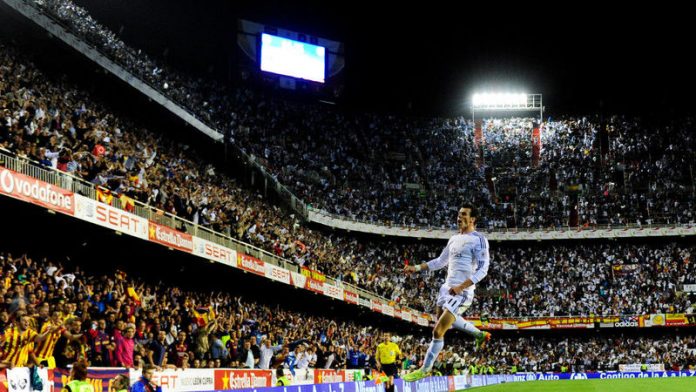 Gareth Bale touched the ball to his team-mate and he blasted into his stride. The run took him from the edge of his own penalty "area" ; the kind of sortie he had trademarked at Tottenham Hotspur and, before that, at Southampton. On Tuesday night, it came in the decorated colours of Real Madrid. Against Bayern Munich. In Bavaria. In the Champions League semifinal second leg.

Angel di Maria found Karim Benzema and Benzema moved it back to Bale who, by now, having crossed halfway, had the pistons pumping. Bale charged past Bayern’s last defender, Jerome Boateng, and, passing up the shot for himself, he worked the ball square to Cristiano Ronaldo, who finished low past Manuel Neuer.

As the ever-understated Ronaldo went into his pre-planned routine to remind the global audience that it was his 15th Champions League goal of the season from 10 ties – to eclipse Lionel Messi’s record – Bale might have pinched himself. Real were 3-0 up on the night, in the backyard of the defending champions, and set for a 4-0 triumph that would take them through, by an aggregate scoreline of 5-0, to their first Champions League final in 12 years.

Bale had won the Copa Del Rey two weeks previously – the first major honour of his career – when his sensational individual goal had made the difference against Barcelona. The La Liga title is not out of the question for him, either. Real trail the leaders, Atletico Madrid, by six points but they have a game in hand. Bale has 20 goals in all competitions and he has found his groove over the second half of the season, when it matters the most. He is revelling on Europe’s grandest stages. So Gareth, any regrets about that transfer last summer?

Small and spindly
“I do think of the journey I have made,” Bale said, after the slaying of Bayern, and the mind went back to him as a small and spindly 15-year-old who, it was feared, might lack the physique to make it in the game. There was also the career-threatening ankle injury at 18, the year of his move from Southampton to Tottenham, plus the thing about him being a jinx for the London club, when he failed to taste victory in 24 Premier League appearances. Harry Redknapp, the manager at the time, was open to selling him.

Bale, though, is not somebody who lingers too long on what has gone, or on anything that is overly sentimental. The 24-year-old lives for the “here and now”, as he said on more than one occasion at the Allianz Arena late on Tuesday night, and the here and now is loaded with possibilities for him.

Chief among them is La Decima, the capture of a 10th European Cup, something that has obsessed Real with burgeoning intensity since the Zinedine Zidane-inspired ninth triumph over Bayer Leverkusen in 2002.

Real have chewed through 10 managers and £905-million in transfer fees in the quest for their holy grail and Bale, the world record £86-million signing from Tottenham, now stands to help them to it. He could succeed where many previous galacticos have failed.

“When I signed, I was told all about La Decima and what it means to the club,” Bale said. “There is a lot of expectation at Real but there is more expectation about that. We are happy to be in the final now, happy to have the chance of actually winning it.”

Bale had said upon his presentation as a Real player last September that he hoped “to be able to help the club to win La Decima”. He said it in Spanish and it got the desired cheers from the fans in attendance. As with each of his high-profile and expensive predecessors, he has been signed to win the Champions League. The pressure is unforgiving. And yet Bale has embraced it.

Thrive on the pressure
“Real Madrid is just the most massive club,” Bale said, a trace of awe in his voice. “No matter who it is and where you are, everybody wants to beat Real Madrid. The expectation here is absolutely huge but we all thrive on the pressure. We certainly did against Bayern.

“We have performed unbelievably all season and now we have one more game to go. Everyone who comes to Real Madrid wants to win the Champions League and now we have a real chance to do it.”

Bale talked of the 4-0 dismantling of Bayern as being “the perfect game” and, having found his rhythm, he appears perfectly suited to manager Carlo Ancelotti’s style, which is defined by speed on the counterattack and ruthless execution.

It was difficult for Bale at first, and not because of the weight of his fee. He missed the whole of pre-season as his move from Tottenham became protracted and then a little bit ugly, and he did not complete 90 minutes for Real until October 30 against Sevilla. That game was only his third start for the club.

“Missing pre-season affected me massively,” Bale said. “I didn’t realise how important a pre-season was until I came to Madrid. It took a little while for me to get going, which I think everyone understood. But I have been able to really kick on after Christmas, to get my fitness up and play well.

“I try not to think about the fee. I came to Madrid to play football and I am enjoying that. If I think about that and nothing else, then I know that I’ll play well.”

Ancelotti believes that Bale will be more consistent over his second season at the club but, for the player, it is all about the moment, the closing weeks of this season. “I’m sure that all of the family will want tickets for the Champions League final,” Bale said, with a smile. He has begun to fulfil his dreams. – © Guardian News & Media 2014