Crusaders pack too much for Brumbies 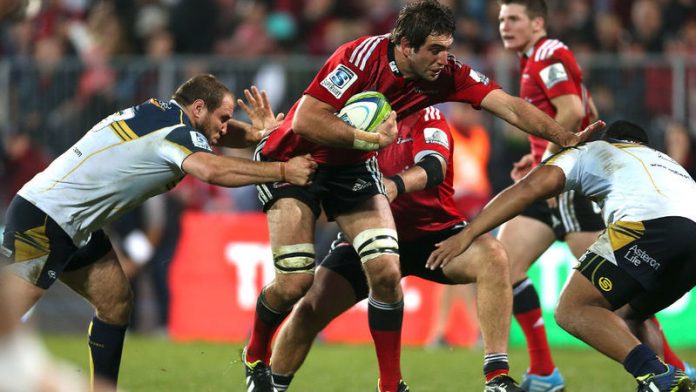 Penalties flowed as the Crusaders’ physicality humbled the leading Australian side allowing fly-half Colin Slade to land seven penalties in a match where tries were scarce.

The scoreboard was driven solely by penalties for the first 40 minutes until Johnny McNicholl broke the drought at the end of a long Crusaders build up to score on the stroke of half-time.

Although the Brumbies enjoyed the greater possession and territory they lost two of their own line-outs as well as three scrums and the turnovers went in the Crusaders favour 6-2.

A central figure in the Crusaders’ forward control was All Blacks Test centurion Richie McCaw who was instrumental in securing several turnovers in his first game back after breaking a thumb in the second round.

“To come out and create the quick ball that we did allowed us to really play,” said Crusaders captain Ryan Crotty.

“We knew we had to upset (their forwards) if we were going to be a chance. Their line-out is one of the best in the comp, and their scrum as well, so big ups to our tight five, they really fronted.”

The Crusaders led 22-6 at half-time after Slade had landed five penalties and converted McNicholl’s try while the Brumbies were forced to rely on two penalties to Nic White.

Moore’s try converted by Christian Lealiifano immediately after the resumption narrowed the gap to 22-13 before the Crusaders powered away. Slade added two further penalties and Sam Whitelock charged down a White kick that bounced into the arms of Nemani Nadolo who had a clear 40-metre run to the line.

The final Crusaders try came from a line-out steal by Luke Whitelock who was on hand to finish off the move on the opposite side of the field.

As the game loosened up with the Crusaders looking for a bonus point try it was the Brumbies who had the final say when McCabe found a way through the Crusaders defence.

The Crusaders have now won six of nine games and moved to the head of the tightly packed New Zealand conference although three sides, including the defending champion Waikato Chiefs, are still to play this weekend.

The Brumbies remain at the top of the New Zealand conference with seven wins from 10 matches. – Sapa-AFP

If the Lions are to become Super Rugby champions at the third time of asking, it’s going to take a lot of firsts
Read more
Advertising
Continue to the category
Politics