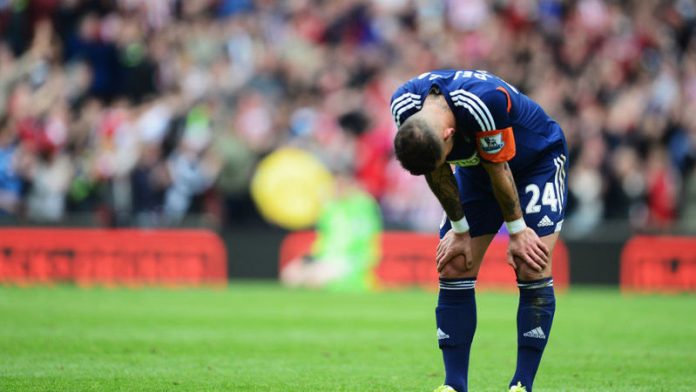 Fulham and Cardiff City were relegated from the Premier League on Saturday after defeats in their penultimate games of the season left them unable to reach safety.

Fulham’s 13-year run in the English top flight was ended by a 4-1 defeat at Stoke City, while Cardiff went straight back down to the Championship following a 3-0 loss at Newcastle United.

The fates of both sides were sealed by fourth-bottom Sunderland’s unexpected 1-0 win at Manchester United, which took Gus Poyet’s side four points above Fulham and five points clear of bottom club Cardiff.

Sunderland can secure their survival by winning their game in hand at home to West Bromwich Albion on Wednesday, although they will effectively be safe if Norwich City lose at Chelsea on Sunday.

Peter Odemwingie put Stoke ahead in the 39th minute against Fulham at the Britannia Stadium, converting from close range after Stephen Ireland’s shot hit the bar.

Marko Arnautovic made it 2-0 nine minutes into the second half, slamming a first-time effort into the roof of the net from Odemwingie’s pass.

Immediate return
Shola Ameobi, Loic Remy and Steven Taylor scored the goals for Newcastle that condemned Cardiff to an immediate return to the second tier after their promotion from the Championship last year.

Newcastle’s win ended a run of six successive defeats and came despite a mass fan walkout in the 69th minute in protest at the club’s management.

Cardiff and Fulham succumbed to relegation despite both changing their managers during the campaign.

Blow for Giggs
Sunderland’s success at Old Trafford, in Ryan Giggs’s second game as United’s interim manager, was their third victory in a row and followed a 2-1 win at Chelsea two weeks ago.

Sebastian Larsson scored the game’s only goal on the half hour, steering in from Connor Wickham’s pass to condemn United to a 12th league defeat of the campaign; seven of which have come at home.

United’s defeat means that Tottenham Hotspur remain in pole position to secure sixth place, and with it Europa League qualification, despite having lost 2-0 at West Ham United earlier in the day.

Tottenham centre-back Younes Kaboul was sent off in the 25th minute for a last-man foul on Stewart Downing and after a Harry Kane own goal gave West Ham the lead, Downing made it 2-0 with a free kick.

Spurs continue to lead United by six points, having played a game more.