SA’s elections: How the IEC made the impossible happen 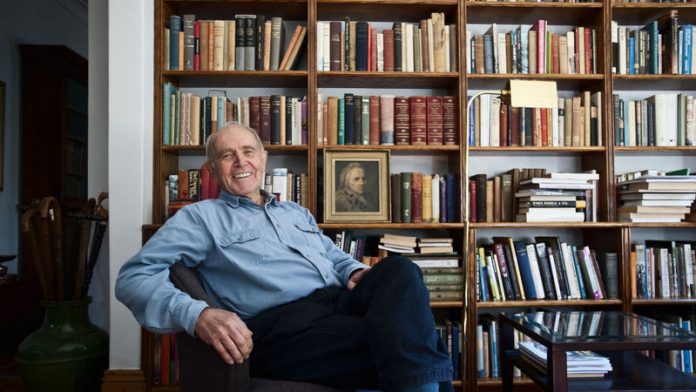 Today’s elections will be a far cry from the country’s first democratic poll 20 years ago. There will be no Inkatha Freedom Party (IFP) stickers hastily pasted to the bottom of your ballot paper. There is no possibility of civil war in the background, and we don’t need to use invisible ink to hide the fact that we’ve voted.

This time around, everyone of age can vote without fear, and the Independent Electoral Commission (IEC) exists to uphold that right.

Despite the controversy swirling around the commission, it has come a long way, says its first chairperson, Judge Johann Kriegler. “It was a very volatile situation and we determined that we would carry on with our preparation, with our planning, with our training, irrespective of what the spoilers or opponents said or did,” he said in an interview with the Mail & Guardian.

Kriegler is sitting on the porch of his house in a leafy street in Johannesburg’s Parkview suburb. He may be over 80 years old, but his speech and thought have lost none of the piercing clarity that saw him move from being a judge under apartheid to a member of the constitutional court in post-1994 South Africa.

‘Grave misunderstanding’
Kriegler said he had agreed to head a temporary electoral commission before the first democratic elections because of a “grave misunderstanding”. He was on holiday at the South Coast when he got the call in December 1993 and couldn’t quite hear the minister of home affairs above the din of his children playing and the roar of the ocean.

“I thought he was offering me the post of chair of the electoral court – I readily accepted,” he laughed.

Organising the first all-in election, against the background of escalating violence in KwaZulu-Natal and a wave of right-wing bombings, was an almost impossible job. It meant setting up a nationwide polling infrastructure for close to 20-million voters, most of whom had never voted previously.

A democrat but a tough and determined pragmatist, Kriegler turned out to be the ideal man for the job. “If we’d known how difficult it was I don’t think we would have succeeded,” he said.

The IFP’s last-minute decision to stand in the election, and the overwhelming importance of drawing it into the process, meant that 18-million stickers had to be printed a week before polling and attached to ballot papers across the country.

Kriegler’s team had the stickers printed in the United Kingdom, flown back to South Africa and then stuck to the ballot papers, which were distributed in a few days. In addition, the law had to be amended to make it possible for the name of the IFP to be written on ballot papers at voting stations which the stickers failed to reach. Another eleventh-hour requirement was setting up and manning 630 new polling stations in KwaZulu-Natal.

Replacement
Invisible ink, which showed up under ultraviolet light, was used to mark voters and prevent them from voting more than once, while concealing the fact that they had been to the polls. When this ran out, presiding officers using water as a replacement, in the hope that voters would be duped into thinking they could not vote again.

It was messy, confusing – but somehow it happened. Kriegler looks back on some of the things that took place with pleasure and amusement.

There’s a story he likes to tell about the presiding officer at a polling station in Orlando East in Soweto, who used his spare jeans to store ballot papers when the ballot boxes were full. The situation arose because in the absence of a voters’ roll, officers did not know how many voters to expect.

“He took his spare pair of jeans and knotted the legs,” Kriegler said with a guffaw. “Then he tipped the first ballot box papers into his jeans, pulled the belt tight, and put it in the corner.”

Despite the precision one would expect of a judge, Kriegler takes great pride in recounting how pragmatism overrode perfect execution to get things done. “Now of course it’s contrary to the law and there’s every possibility that someone might have interfered. But we counted those ballots. What was the alternative? Did you turn the people of Orlando East away because you’d run out of ballot boxes?”

Kriegler and his first set of 11 commissioners, drawn from across the political spectrum, were doing the impossible, and the pragmatic view was that they should be allowed some latitude in making up the rules as as they went along. “We were told by the experts that we would need 18 months, or preferably two years, to get this thing going,” he said. “We had less than four months.”

Helpless
In those whirlwind weeks they had to hire offices and staff, figure out how many people were voting, and arrange voting materials – while watching helplessly as the violent conflict between the ANC and the IFP unfolded and more than 40 bombs planted by the far-right exploded.

Kriegler remembers watching “spellbound” from his office window in Johannesburg as tens of thousands of IFP supporters marched to the ANC’s head office at Shell House. Despite this, he said he felt an unwavering certainty about the ultimate success of the elections. “If you had asked me at any stage I would never have doubted that the elections would take place and that the transition from the old to the new would take place. I never doubted that.”

Not many people would say the pre-1994 violence was “not that bad” – but that’s what Kriegler says of that turbulent period. “There was a great deal more than the violence,” he explains. “Yes, there were serious threats, but the very substantial majority of the people of South Africa of all political persuasions were determined that these elections would take place. We were merely the agents for a political will that propelled us forward.”

Kriegler’s successor, Brigalia Bam, lives Pretoria in her own tree-lined street. Unlike Kriegler with his six children, Bam never married. A woman of deep faith – “to me your faith is fundamental in sustaining you,” she says – she appears to feel that building the IEC into a credible organisation was a kind of calling.

While Kriegler was charged with pulling off an unlikely first election using nimble-footed improvisation, Bam had to take the permanent Independent Electoral Commission, established on October 17 1996, through its first national and provincial elections in 1999, according to far stricter, legislated procedures.

They are contrasting personalities. While Kriegler exudes a sense of confidence and easy self-assurance, Bam peppers her account with humorous, self-deprecating anecdotes.

“I was ready to faint and die!” she declares, describing how the IEC’s first board of real-time election results hit a hitch when they unveiled it. She turned to her team to resolve the problem. “Unlike the 1994 event there was so much more legislation,” she said. “There were new things in the Electoral Act and the legal frameworks that were binding on all kinds of things in elections – including very minor things.”

Bam had one day to adjust to being the commission’s head. Kriegler’s deputy at the time, she found herself in the hot seat shortly before the 1999 poll, when Kriegler resigned after a long-running battle with Thabo Mbeki’s government over funding and other issues.

Uneasy
She had expected to be groomed slowly for the position; instead she was charged with running a full-blown ballot with a team that, for the most part, had not experienced one. “I was nervous that some of the staff that had worked with Judge Kriegler would want to leave the organisation under new leadership,” she says. “I had known some staff would have difficulties in being led by a woman, and a lot of them would be uneasy about being led by a black person. And there were also those who were uneasy about being led by a black person who was not even a judge.”

Kriegler believes that Bam’s ability to create unity and inspire trust saw her “do a better job in that phase of the IEC’s development than I could have done”. Still, there were the naysayers. “I remember getting a very disturbing call from a BBC journalist who said to me: ‘I understand that you are the new chairperson of the IEC in SA’,” recalled Bam, mimicking the journalist’s brisk manner. “I said ‘yes’. He said: ‘Do you think you can manage the elections now that you’re taking over? Are the elections going to be postponed?'”

Her face is the picture of mortification as she remembers how she felt as a new leader in the job, terrified by what lay before her. Bam’s underlying strength has seen her through a number of challenging jobs, including that of general secretary of the South African Council of Churches.

“I thought to myself: well, I’ve had an opportunity in my life to lead and I have to think of the few principles I have learned in the world.” She concluded that her job was “to lead a group, to inspire them, to affirm them, to learn with them”.

Asked to comment on the row sparked by a controversial leasing deal linked to the IEC’s current chair, Pansy Tlakula, Bam and Kriegler have stressed how important perceptions are in elections.

But despite the cloud over the commission, there can be no denying that it has done sterling work in enabling South Africans to vote over 20 years of free and fair elections. “South Africans love elections,” said Bam with pride. “I’m not sure if it’ll be the same 50 years from now, but I’m talking of the South Africa of today. The institution of the IEC is associated with this hope and this glamour.”