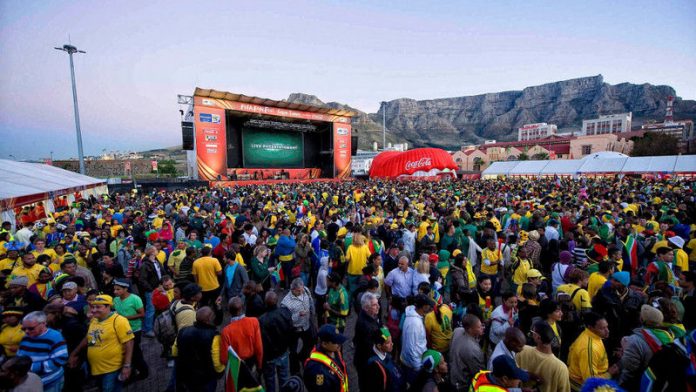 Four years ago, South Africa was working at fever pitch to ready itself for the biggest event it has ever hosted – the 2010 Fifa World Cup. Millions of tourists were expected to converge on it for the tournament, which pundits said would position the country at the top of the world’s list of African tourism destinations and leave a lasting legacy of prosperity and world-class facilities.

South African Tourism (SAT), the quasi-governmental organisation responsible for marketing South Africa to the rest of the travelling world through its network of international offices, was set to reap the harvest. The soccer world came, it saw, and went home again, leaving South Africa on a high, with the world seemingly at its feet.

In June, Brazil will host the next World Cup, leaving South Africa asking the inevitable question: Have we capitalised on the golden opportunity provided? The short answer is no. Though this summer looks likely to be the best that Cape Town tourism – and possibly the rest of South Africa – has had in a good long time, the bad news for SAT is that it can’t take credit for this. The combination of a favourable exchange rate for overseas tourists, the fact that South Africa is in the same time zone as Europe, poor weather in our key markets and word-of-mouth referrals from happy guests have made it a summer to remember, but it’s the first in years and the Fifa World Cup’s tourism legacy has fallen way short of what was promised.

Trouble set in almost as soon as the final whistle was blown. A year after the World Cup, South Africa’s tourism industry was experiencing one of the worst slumps in its history. In June 2011, the country’s industry barometer, the Tourism Business Index, reflected a significantly weaker-than-anticipated tourism performance for the last quarter of 2010 and the whole of 2011.

Anticipated international arrivals just weren’t arriving. Hotels that had expanded to cater for the World Cup influx were less than 50% full. Jobs were being lost. Businesses were scaling back or going bust. The big events SAT and the government said would come in the wake of the World Cup went elsewhere. Stadiums stood empty; their owners couldn’t even afford to switch on the lights for less than a capacity crowd.

Yet, when he presented the tourism arrivals figures for 2011 to Parliament in April 2012, Tourism Minister Marthinus van Schalkwyk was upbeat. More than eight million people visited South Africa that year, he said – a 3.3% increase on 2010. He added that, if you took off the football-related arrivals for 2010, the figure represented a 7.4% increase, well ahead of the global trend of 4.4% annual growth. How could this be?

There is widespread suspicion of these arrivals figures. Indeed, the most recent numbers (December 2013) show a “healthy” growth of 5.76%, but ignore the fact that our biggest source market, Britain, is in a decline and has been for some time.

But then the numbers can be dodgy. Lesotho’s visitor arrivals in 2012 show that 98% of them were on holiday, with only 2% coming into South Africa for business or other reasons. Lesotho has a population of about 1.9-million, yet in 2012 we hosted more than 1.6-million Lesotho “holiday-makers!” This anomaly appears when 100 people from Lesotho travel over our border 100 times a year to buy produce – and are counted as 10 000 tourism arrivals.

So SAT and Van Schalkwyk are not telling Parliament the whole story. South Africa’s 2012 tourism arrivals from Britain were down 4% compared with 2003. The December 2013 figures show a further slide of 1.33% – in the busiest month of the year. Over the past decade, South Africa cumulatively spent close to R10-billion of public funds on international marketing campaigns, but there is little evidence we are getting any bang for these considerable bucks.

It gets worse. More international tourism arrivals in South Africa are spending less time here, using it as a hub for visits to other Southern African destinations (Botswana, Namibia or Zambia), where the bulk of their tourism spend takes place.

Transit travellers account for 29.9% of travellers from China (our number-four market, according to Statistics SA) and a huge 44.08% of all Brazilian arrivals. What is not clear is how much transit affects other key arrivals figures, but if it is a factor in two key markets it’s likely to affect them all.

Arrivals from our largest market, the United Kingdom, have declined, but those from the United States have soared – 74% up since 2003! Why? Because many Americans use South Africa as a stopover on their way to a safari to Botswana, Kenya or Tanzania. They are counted twice: once when they arrive in South Africa, en route elsewhere, and again when they come back, en route home to the US. SAT, then, may not be doing as well as it likes to think.

According to SAT’s 2012/13 annual report, only five out of 19 board members have experience in the tourism market. Perhaps this explains the lack of a workable strategy.

This board is also ultimately responsible for serious problems at overseas offices. The office in Milan, Italy, was fined more than R1-million for “non-compliance” with Italian labour laws. In Britain, SAT was prosecuted successfully at a tax tribunal for illegally claiming back VAT. The London office has also been without leadership for two years since the departure of Lungi Morrison.

The awarding of one tender to an entity without a valid tax certificate at the time of evaluating the contract constitutes irregular spending of more than R17-million. Lease agreements made without adherence to procurement regulations in Angola, India and the Netherlands cost SAT more than R650?000. Legal proceedings for the year cost R11-million.

SAT’s annual report shows the bulk of its budget to be government grants; the Tourism Marketing South Africa levy funds a bulky, costly head office with more than 70% of SAT’s staff. Money has been spent on international TV campaigns on National Geographic and CNN. Last year, R82.4-million was dished out to “marketing consultants” working independently of SAT, notably the Ireland Davenport agency. Individual countries get bite-sized portions of what’s left of the budget.

A weak rand reduces the marketing power of our money, leaving SAT’s country offices with less to work with. SAT is pouring a considerable amount of money into establishing new offices in Africa, which is widely recognised as the “boom” market for South Africa. The importance of the African market cannot be understated but sources in SAT say that it is equally important to maintain existing operations properly in other core markets and that expansion into Africa should not come at the expense of investment in Europe, which currently delivers by far the largest portion of foreign tourism spend in South Africa. Ultimately, it’s about balancing the lucrative emerging markets with existing ones in order to maximise return on investment and increase tourism spend in the country.

Indaba, the tourism industry expo SAT hosts annually in Durban, should represent the coming together of South Africa and African product owners with international buyers from all over the globe. Attended by anyone who’s anyone in African tourism and the world’s travel and tourism media, it is one of the biggest tourism expos in the world, but Indaba 2012 was a mere shadow of its earlier forms. Complaints about its lacklustre organisation and spiralling costs came thick and fast, with many prominent tourism operators threatening to boycott future events.

Indaba 2013 did little to stem the disenchantment. A considerable amount has been spent by SAT to “rebrand” and “modernise” the expo for 2014, but there is still considerable doubt about its future. Meanwhile, the myth that tourism in South Africa is booming is perpetuated and taken at face value, without the real concerns of the industry being taken into account. Setting realistic targets for sustainable tourism growth would help. If, each year, we attracted another million long-haul leisure tourists, and each of them stayed 10 days in South Africa and spent $110 a day, over 10 years we’d earn R100-billion in additional foreign exchange.

Perhaps this year’s Indaba, which takes place from May 10 to 13 in Durban, will give the tourism industry the opportunity to ask SAT for some answers.

Sharon van Wyk is an award-winning journalist and filmmaker specialising in tourism and conservation in Africa.

SA Tourism responds
On staffing, SAT says: “There has not been a significant increase in the overall number of staff in the past three years. SAT also had its mandate broadened by incorporating the Tourism Grading Council of South Africa and the South African National Convention Bureau.”

On measures to assess performance and the return on investment, SAT says it has “a comprehensive approach. Overall our key performance indicators are measured against tourist arrivals and brand awareness.”

On a replacement for the head of SAT’s London office, SAT says that “the process is in the final phase of the recruitment cycle”.

On the anomalies in the tourism arrivals numbers, SAT says it “entered into a memorandum of understanding with Statistics South Africa in 2011 with the aim of improving the quality of tourism statistics” and “a joint task team has been set up to ensure that data is reliable”. SAT is “working with the tourism trade to ensure that all anomalies are addressed”.