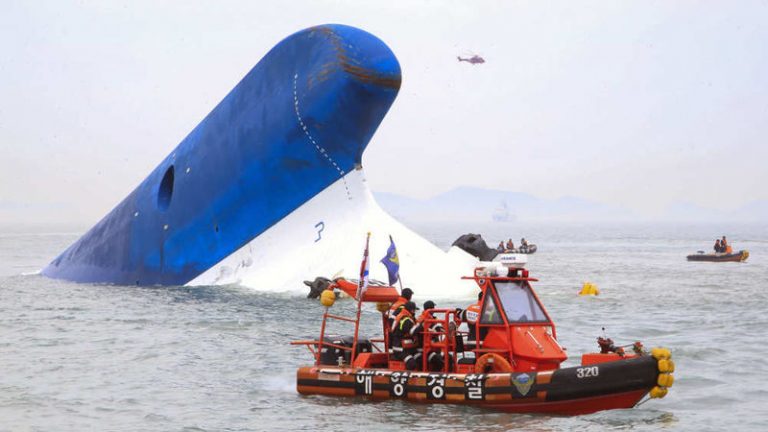 Divers have retrieved two more bodies from the wreck of the South Korean ferry that sank last month, as conditions on the ship further deteriorated, officials said on Saturday.

The bodies were found late Friday in the inverted, submerged ship, bringing the confirmed death toll from the April 16 disaster to 275, Coastguard Spokesman Ko Myung-Suk told journalists. Twenty-nine are still unaccounted for.

Divers have now swept through most of the ship, which is resting on its side at a depth of more than 40 meters off the country’s southern coast. But as days go by, they are retrieving fewer and fewer bodies.

The divers have also reported that partition walls on the ship have started warping and are at risk of collapsing, which would further complicate their work, a government task force said in a statement.

The divers have been under immense pressure from the authorities and the victims’ families to retrieve all the trapped bodies as quickly as possible. They face enormous hazards and challenges, including near-zero visibility, strong currents and often treacherous weather conditions.

A storm warning was likely to be raised later Saturday, Ko said. “But the government will push through with the search operations”, he said.

More arrests
The Sewol was carrying 476 people when it sank after listing sharply to one side. Of those on board, 325 were children from a high school in Ansan City in the southern suburbs of Seoul who were on an organised trip to the southern resort island of Jeju.

Initial investigations suggest the ferry was carrying up to three times its safe cargo capacity. “The ferry had been habitually overloaded,” investigators said.

The Sewol’s regular captain, who was off duty on the day of the accident, has told prosecutors that the ferry operator – Chonghaejin Marine Co – “brushed aside” repeated warnings that the 20-year-old ship had stability issues following a renovation in 2012.

A court warrant was issued late Friday to arrest the head of Chonghaejin, Kim Han-Sik, Prosecutor Yang Jong-Jin told AFP on Saturday. He faces charges of manslaughter through negligence and breaches of vessel safety laws, Yonhap news agency said. The latest move brought to five the number of Chonghaejin officials arrested over the disaster.

Meanwhile, there has been no let-up in nationwide mourning over the catastrophe. The government said more than 1.65-million people had paid their respects at memorial places across the country since the mourning period began.

At a public park in Ansan, a focal point of national mourning, some 2 000 students from various high schools in the city held a candlelit vigil on Friday night for the victims, with yellow ribbons tied to their arms.  –Sapa-AFP