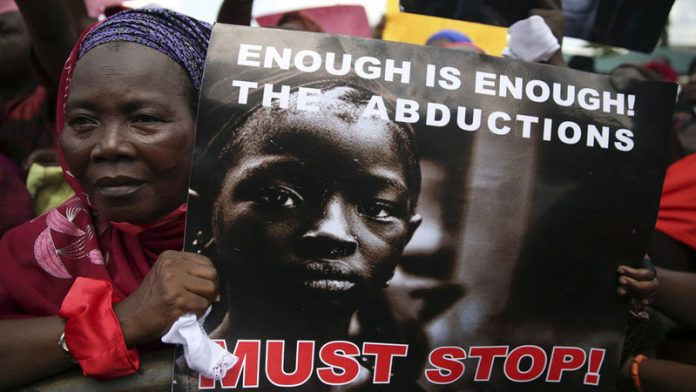 The United Nations Security Council on Friday expressed outrage at the abduction of hundreds of Nigerian schoolgirls in two attacks by militant group, Boko Haram, demanding their immediate release and threatening to take action.

Boko Haram kidnapped more than 200 girls from a secondary school in Chibok in remote north-eastern Nigeria on April 14 and has threatened to sell them into slavery, while eight girls were taken from another village earlier this week.

“The members of the Security Council expressed their intention to actively follow the situation of the abducted girls and to consider appropriate measures against Boko Haram,” the 15-member council, which includes Nigeria, said in a statement.

Boko Haram’s five-year-old insurgency is aimed at reviving a medieval Islamic caliphate in modern Nigeria, whose 170-million people are split roughly evenly between Christians and Muslims, and it is becoming by far the biggest security threat to Africa’s top oil producer.

Immediate release
The Security Council statement “demanded the immediate and unconditional release of all abducted girls still in captivity and further expressed their deep concern at statements made by the alleged leader of Boko Haram threatening to sell these girls as slaves.”

It also condemned the latest big attack in Nigeria, the killing of 125 people on Monday when gunmen rampaged through a town in the northeast near the Cameroon border.

Several countries, including the United States, Britain, France and China, have offered support to Nigeria to help find the girls. British experts including diplomats, aid workers and Ministry of Defence officials arrived in Nigeria on Friday to advise the government on the search.

“The members of the Security Council welcomed the ongoing efforts of the Government of Nigeria to ensure the safe return of the abducted girls to their families, as well as international efforts to provide assistance to the Nigerian authorities in this regard and bring the perpetrators to justice,” the statement said.

UN Secretary-General Ban Ki-moon said on Thursday that Nigerian President Goodluck Jonathan had accepted his offer to send a high-level UN envoy “to discuss how the United Nations can better support the government’s efforts to tackle the internal challenges.”

Ban said in a statement that he was deeply concerned about the fate of the girls and that “the targeting of children and schools is against international law and cannot be justified under any circumstances.”

Still in Nigeria
Nigerian President Goodluck Jonathan said on Friday he believed the more than 200 schoolgirls abducted by Boko Haram last month in an attack that has stirred global outrage are still in his country and have not been moved to neighbouring Cameroon.

Jonathan’s government has been criticised for its slow response to the hostage crisis, and Friday is the first time he has said where he thinks the girls are being held.

“There are stories that they have moved them outside of the country. But if they move that number of girls to Cameroon, people will see, so I believe they are still in Nigeria,” Jonathan told journalists.

“We are also working with the experts that will use remote sensors to see them (insurgents) wherever they are. So that basically says they are within the Sambisa area,” Jonathan said, referring to a forest that is a known Boko Haram hideout near the school from where the girls were abducted.

He was speaking on the sidelines of the World Economic Forum in the Nigerian capital, Abuja. The event showcased investment opportunities in Africa’s biggest economy, but was partially overshadowed by the kidnapping and a broader militant threat.

Boko Haram’s struggle for an Islamic state has killed thousands since it erupted in mid-2009 and has destabilised swathes of the northeast of Africa’s top oil producer, as well as neighbours Cameroon and Niger.

Amnesty report
Human rights group Amnesty International said in a statement, citing multiple interviews with sources, that the security forces had been warned more than four hours in advance about the school attack but did not do enough to stop it.

“The fact that Nigerian security forces knew about Boko Haram’s impending raid but failed to take the immediate action needed to stop it will only amplify the national and international outcry at this horrific crime,” said Netsanet Belay, the organisation’s Africa director of research and advocacy.

Nigeria’s Defence Headquarters spokesman Chris Olukolade dismissed Amnesty’s report as baseless and said it was aimed at tarring the reputation of the country’s authorities.

“The report is just a collation of the rumours, views and allegations of their fellow detractors and local operatives,” he said.

Smearing Islam image
As condemnation of the abductions spread, Saudi Arabia’s grand mufti, the top religious authority in the birthplace of Islam, said Boko Haram rebels who conducted the abductions had “set up to smear the image of Islam”.

Sheikh Abdulaziz Al al-Sheikh said Boko Haram had been “misguided” and should be “shown their wrong path and be made to reject it.”

His remarks came as religious leaders in the Muslim world, who often do not comment on militant violence, joined in denouncing Boko Haram leader Abubakar Shekau for saying Allah had told him to sell off the kidnapped girls as forced brides.

The Senate Foreign Relations Subcommittee on Africa Affairs said it will hold a hearing next Thursday on US offers of assistance to Nigeria after the abductions.

The revolt has displaced more than 250,000 people in Nigeria and 60,000 have fled the country, UN refugee agency (UNHCR) spokesman Adrian Edwards said in Geneva on Friday. UNHCR is “alarmed at the recent wave of attacks on civilians”, he said.  –Reuters

To unseat the ANC, South Africa’s opposition must put aside their egos