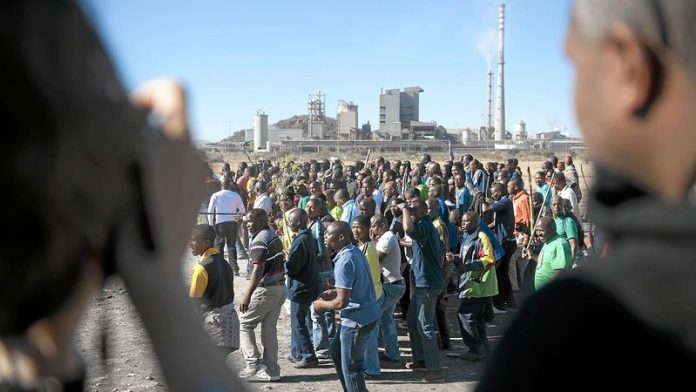 The angry community of Bapong village near Marikana, where a mineworker was found dead in his shack on Saturday afternoon, want Lonmin managers to stop sending SMSs asking people to return to work.

Community members at a meeting hosted at the hall in a section called Legalaopeng on Tuesday asked their headmen to take up the issue with mine managers in Marikana.

Residents said they would monitor the situation tomorrow morning to make sure that no miner goes back to work.

Many people say the SMSs have fuelled tension among the workers.

The meeting was convened three days after the gruesome discovery of a mineworker’s body. Lucky Nkaelang (47), a Lonmin employee at One Shaft, was stabbed to death along with his Mozambican girlfriend Lulu Maramba (38) on Friday night.

Their neighbour, who didn’t want to be named for fear of victimisation, said she became concerned after noticing that the victim’s home had remained locked up for most of the day. The place was also used as a shebeen. She contacted the deceased’s relatives.

Members of the Association of Mineworkers and Construction Union (Amcu) at Impala Platinum and Anglo American Platinum in Rustenburg and Northam in Limpopo went on strike on January 23 demanding a minimum wage of R12 500 a month.

Workers said they wouldn’t report to work tomorrow because they fear for their safety. They have rejected repeatedly the companies’ wage increase offer of 9%.

He said the majority of employees wanted to return to work but feared intimidation by the striking workers.

Scared to work
A mineworker at Three Shaft in Marikana was sent an SMS yesterday, but said he was scared to go back to work.

Those who replied to the SMSs have been promised security for their journey to work and back to their respective homes.

They told the Mail & Guardian that non-striking workers had threatened to attack those who dare report for duty. They said the mine companies wouldn’t provide security for their homes, where they are vulnerable to attack.

Another 60-year-old Lonmin mineworker from Saffi Shaft was found murdered between the shaft and the Bob mine hostel. The deceased sustained multiple stab wounds to his back, chest and ribs.

At Lonmin’s K3 shaft, another worker burnt to death after he was allegedly set alight at his shack at Bighouse Informal Settlement on Saturday.

No arrests
North West police spokesperson Brigadier Thulani Ngubane told the M&G on Tuesday afternoon that no one had been arrested in connection with the killings.

Police are still keeping an eye on the situation at the Rustenburg mines.

In April, a 47-year-old miner’s car was torched in Thekwane outside Rustenburg.

National Union of Mineworkers’ member Livhuwani Mammburu said: "We have on several occasions called law enforcement agencies and security at the platinum belt to be on high alert and protect our members and other employees who are going to work, but that hasn’t been happening."

Ngubane has accused the leaders of the Economic Freedom Fighters of fuelling tension on the platinum belt after they pledged their support for the four-month strike. The party plans to donate R50 000 to the strike fund started by Amcu.

On Monday, Police Minister Nathi Mthethwa condemned the killing of three miners. "The protection of those involved in the labour disputes in the North West is a matter that government takes extremely seriously," Mthethwa said.

Three shops belonging to foreign nationals were set alight on Tuesday afternoon and it is believed the striking miners are behind the arson attacks.