Support group tells Farlam not to be part of Marikana ‘whitewash’ 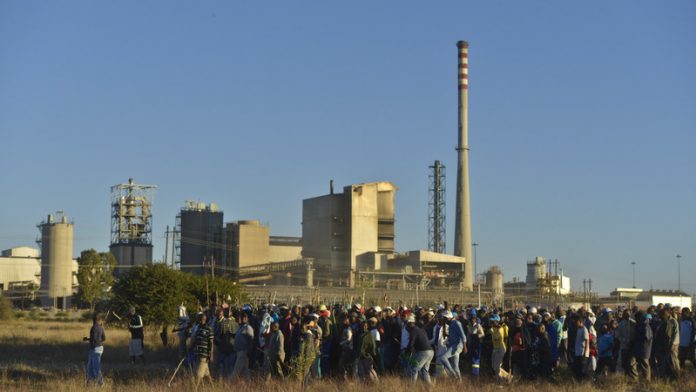 The Marikana Support Campaign has called for an independent commission of inquiry to be formed to shed light on the circumstances leading up to the Marikana massacre.

Bishop Seoka, as a member of the campaign’s steering committee, made the call on Wednesday afternoon during a gathering at Wits University to renounce the Marikana commission of inquiry’s new terms of reference and to show support for the current strike in the platinum belt.

The new terms of reference, proclaimed by President Jacob Zuma on April 25, preclude clause 1.5. This clause relates to probing the "role played by the department of mineral resources or any other government department or agency in reaction to the incident" of August 16 2012, and whether this was appropriate in accordance with the law.

The support group refuted retired judge and commission chairperson Ian Farlam’s statement that the proclamation would only affect phase two of the inquiry (which deals with broader, underlying factors that may have led to the massacre), and has little bearing on phase one (which deals with the days of August 9 to August 16).

Rehad Desai, also a member of the group’s steering committee, said, "The terms of reference have no ‘phase two’. Phase two is only the way the commissioners have organised the work. It was a lobby from the bishop’s organisation [Benchmarks Foundation] that suggested that underlying factors be looked into. Phase two is informal discussions that have taken place at places like Wits. If the clause is innocuous, and phase two is a smaller part of the commission’s work, then reinstate it."

Badly handled
Trevor Ngwane, another steering committee member, said, "From today [Wednesday], there are only 34 working days until the commission shuts down. It’s not enough time to cross-examine the police who pulled the trigger."

Stuart Wilson of the Socio-Economic Rights Institute (Seri-SA), which is representing some of the families of the deceased, added, "I don’t think the commission or the presidency handled that well. They should’ve foreseen that it would lead to criticism. That they didn’t is astonishing … they should have known that it would create the impression that they’re letting the government off the hook."

"We still believe the commission is worth participating in and can produce a credible report. But the deletion of clause 1.5 and the curtailment of proceedings on July 31 could put that at risk because the commission’s scope has been narrowed and it is now rushing through witnesses in a way that only helps the police," Wilson explained.

"A great deal of time was wasted last year. Even now, the commission has only heard from three police officers who admit firing a gun. It hasn’t actually heard from any police officer who admits firing any fatal shots. It is worrying that things are wrapping up just as the commission seems to be getting to all the fine details that our clients, the families of the deceased, are most interested in. They want to know how and why each of their loved ones died. I don’t see that being established in sufficient detail before July 31. I would say we need until the end of October, or perhaps the end of the year, to do things properly," he added.

In its statement last week, Seri-SA said that it was assured by the commission that paragraph 1.2 of the terms of reference covered the role of the South African Police Service and was not amended; paragraph 1.5 would not cover phase one of the commission; and statements from Police Minister Nathi Mthethwa and ANC deputy president and Lonmin non-executive director Cyril Ramaphosa were received, and they are expected to give oral evidence.

Fertile ground for further conflict
Lawson Naidoo of the Council for the Advancement of the South African Constitution said, "I don’t think it will affect phase one to any great extent, except in curtailing cross-examination, which is something that should have happened much earlier anyway. There have been lots of meaningless days of cross-examination and most of the evidence has been heard. Phase two, dealing with collective bargaining, migrant labour and so on, is a different issue. Failing to deal with those issues creates fertile ground for more conflict in the platinum belt with no remedial action for the future. Taking out the role of the department of mineral resources and other government departments, like the department of labour as the regulator of the mining industry, precludes Farlam from dealing with the issues. It’s a missed opportunity to deal with issues of the day, because right now we have a stalemate in the platinum belt."

The campaign’s steering committee said that over the past few months there was increasing evidence pointing to who was responsible for the massacre, and it was appealing to Farlam to not be part of the "whitewash".