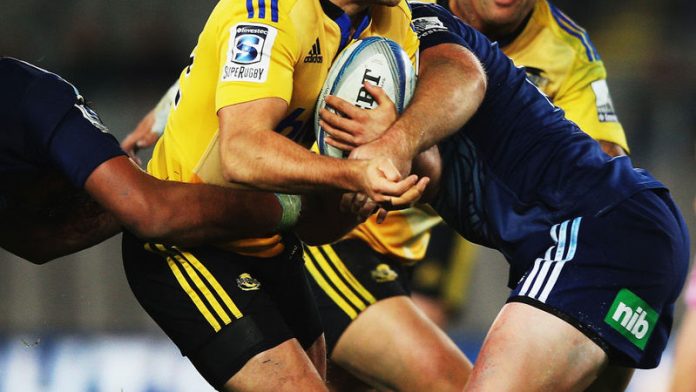 The Auckland-based Blues also scored two tries, one of them a penalty try, within three minutes in the first half on their way to a 15-7 lead at half-time and an upset win over their better-placed New Zealand conference rival.

England coach Stuart Lancaster was an interested spectator at the match, a week away from the first of his team’s three Test matches against New Zealand at Auckland’s Eden Park.

He saw a physical confrontation between two New Zealand teams and a win to the Blues, which overturned predictions and severely undermined the Hurricanes’ play-off claims.

The Blues were almost out of play-offs contention ahead of the 16th-round match and the Hurricanes were coming off an impressive 45-8 win over defending champions the Chiefs. That made the Hurricanes the overwhelming favourites but they struggled, as they have throughout the season, to achieve back-to-back wins.

The Blues played aggressively and largely controlled the match in the first half, with a sound scrum and line-out and a fast-paced game that left the Hurricanes reacting to rather than creating play. Locks Patrick Tuipulotu and Tom Donnelly were outstanding ball carriers and captain Luke Braid provided a superb example at contested breakdowns.

‘Sticking to a plan’
“I guess it was just sticking to a plan that we came up with during the week and the boys did it really well,” Braid said. “I think it was just an attitude thing. We were slow to the breakdown last week so we were big on taking them on up front this week.”

The Hurricanes scored the opening try, against the run of play, through flanker Failfili Levave, who also scored their final try a minute before full-time.

The Blues gained a lead they didn’t surrender for the remainder of the match with a penalty try in the 14th minute and with a try to fullback Lolagi Visinia three minutes later.

The penalty try was the third awarded in this weekend’s round of matches after two were given to the Crusaders in their 30-7 win over the Western Force on Friday. Television match official Glenn Newman ruled that Hurricanes fullback Matt Proctor had deliberately knocked down a pass between Ma’a Nonu and Bryn Hall during a Blues attack.

Referee Garratt Williamson responded by awarding the penalty try and sending Proctor to the sin bin. The Blues capitalised immediately on their numerical advantage by creating a try when Visinia ran on to a kick behind the defence from Peter Ahki.

Tenuous advantage
The Blues turned that tenuous half-time advantage into a decisive lead with tries to flanker Jerome Kaino and winger George Moala in the second and sixth minutes of the second half.

They then added a try by Tuipulotu in the 65th minute. The Hurricanes scored second-half tries through brothers Julian and Ardie Savea.

“I think we felt we were further behind than we were,” Hurricanes captain Conrad Smith said. “We started well and then we didn’t react well enough when we were 14 men and gave up 14 points.

“I thought they defended really well at the end of that first half and when we didn’t score we started panicking. There’s not much between these sides, I say that every week, and we weren’t quite there. They turned up and that’s what happens.” – Sapa-AP