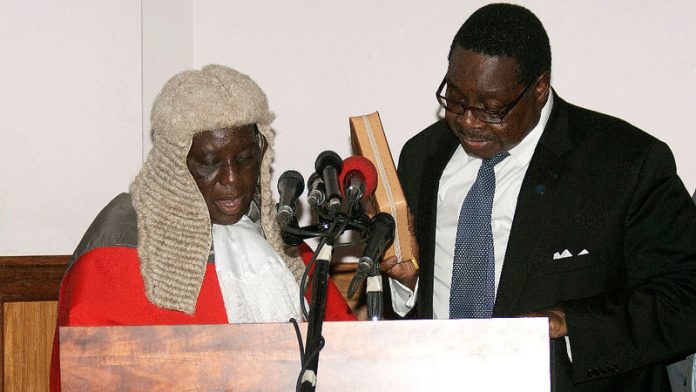 “We would like to assure Mr Mutharika of South Africa’s commitment to strengthening bilateral relations between our two countries,” said Zuma.

“I would also like to take this opportunity to congratulate the people of Malawi for successfully conducting their elections, thus entrenching a democratic culture in the country.”

Former foreign minister Peter Mutharika was sworn in on Saturday as the new president of Malawi after the election commission declared him the winner of the disputed polls.

Mutharika, the younger brother of president Bingu wa Mutharika who died in office in 2012, urged the 11 other former presidential candidates to “join me in rebuilding the country” after some of them had contested the results.

The results of the fraught May 20 election were announced late on Friday after the high court blocked a last-ditch demand for a recount.

“It’s obvious we are facing serious problems in this country. All of us together, let us build the country which is almost on the verge of collapse,” Mutharika said in his first speech since being declared president.

Treason charges
The 74-year-old law professor takes the leadership of Malawi facing treason charges for attempting to conceal his brother’s death in office two years ago, in an alleged bid to prevent Joyce Banda – then vice-president – from assuming power.

As a former foreign minister and his brother’s right-hand man, he was also a leading member of an administration widely blamed for bringing the small Southern African country’s economy to its knees through years of mismanagement.

At the time of Bingu wa Mutharika’s death in 2012, stores were often empty, service stations dry and, shunned by international donors, Malawi had largely depleted its currency reserves.

Mutharika told journalists at a news conference at his residence in a leafy suburb of Nyambadwe in Blantyre that he would continue maintaining relationships with Western donors while courting “new friends” such as China and Brazil.

“It’s inevitable, we will continue our relationship with donors who provide 40% of our recurrent budget,” he said.

Bowing out
Banda, Malawi’s first woman president, conceded defeat and congratulated Mutharika on Saturday on his “victory in a closely contested election”. Banda said she was “leaving office a happy person” after winning 20.2% of the votes compared with Mutharika’s 36.4%.

There is speculation that Mutharika could now turn the tables and charge Banda with corruption over a $30-million graft scandal dubbed Cashgate.

Banda has claimed credit for uncovering the fraud, which saw aid money siphoned into top government officials’ pockets. But critics, including Mutharika, say the funds went into her party’s election war chest.

The stakes are no less high for Mutharika while he, along with other senior officials, faces charges of inciting mutiny and conspiracy to commit a felony.

The trial is still pending, but analysts say it is likely the case will be set aside as Malawi’s presidents enjoy immunity from prosecution as long as they are in office.

Malawians must move forward
Banda made no mention of electoral fraud – or any other charges – as she conceded defeat and urged the country to throw its weight behind Mutharika.

She told “all Malawians to support the newly elected President Professor Mutharika and his government as they take on this foundation of progress and endeavour to develop Malawi even further”.

Malawians should move forward “as one nation, to remain united, to uphold the rule of law, and continue being peaceful and calm as we head into the next 50 years of Malawi’s future,” said Banda.

The tense elections saw sporadic outbreaks of violence among supporters of the different parties. One person was killed when police fired tear gas and rubber bullets at protesters demanding a recount in the southeastern town of Mangochi.

Mutharika took the oath of office with vice-president Saulos Chilima before a chief justice. – Sapa and AFP