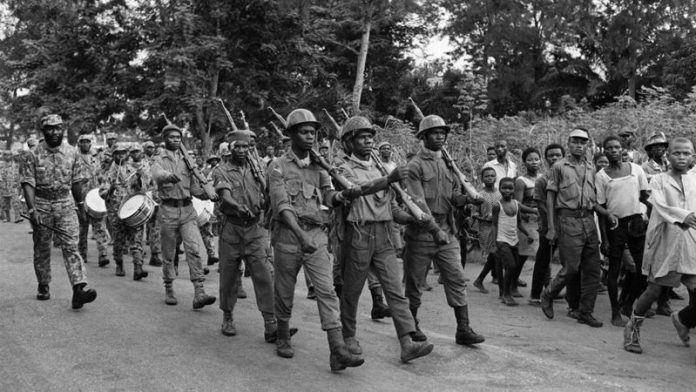 This may be the most critical moment in Nigeria for a generation. The threat of Boko Haram has been a fuse burning away in the powder keg of Nigerian political life for the past seven years, and has largely not been confronted. The political class, with a few distinguished exceptions, has long been in a state of smugness, complacency and collusion. A kind of informal high-grade corruption has become part of national life.

When Boko Haram began its campaign of cultural, religious and educational separatism – decrying Western education and trying to bring Nigeria under the shadow of sharia law – it was seen as a small outfit, a ragtag band of fundamentalists not to be taken seriously.

At the time the nation was distracted by the fallout from the Niger Delta protests in the southeast, the sabotage of oil pipelines and the rash of kidnappings that made the area particularly dangerous. The protests were due to the extreme environmental pollution by oil companies that had devastated farmlands, rivers, whole villages and towns. The execution of Ken Saro-Wiwa in 1995 was the last outrage during the long Nigerian sleep.

The abduction of 276 girls by Boko Haram has rightly drawn international condemnation of the government’s slow reaction to this unprecedented outrage committed against Nigerian womanhood. But the political elite has for too long been desensitised to the plight of its people.

This is one of the long-unexamined consequences of the trauma of the Nigerian civil war in the late 1960s, whose horrors have never been allowed to heal. The nation passed from a war in which over a million people died into “normality”, with no intervening act of healing the wounded national psyche.

Worse
The political class does not recognise what other nations would immediately take to be gross outrages. You can almost hear a politician say: “What is all the fuss about? We see worse in our streets every day.” It is seeing worse, living with worse as though it was normal, that has given rise to the somnolent response to the girls’ abduction.

There is also the history. The problem of Boko Haram has its causes in the very foundation of the nation itself. The fault line was there when the British government created the northern and southern protectorate before combining them into a single nation called Nigeria in 1914.

The north-south divide, at the heart of the Nigerian polity, is the elephant in the room. There are those who hint at forces behind Boko Haram trying to bring about, through terror, a return to the hegemony of the north. It is not wise to dwell on such toxic rumours. But it is well to note that Boko Haram’s roots lie firmly in the north.

One of its roots could also be said to lie in the endemic poverty, the politics of inequality and corruption, which have been eating away at the nation’s heart. In a country rich with oil revenues, where billions vanish from the national coffers with no one held to account, where going into politics means acquiring vast and sudden wealth, where slums breed in larger numbers every day, where the national revenue does not improve people’s lives across the whole country, it is unsurprising that violent sects grow from such a festering condition.

But none of these factors explain the abductions and the suicide bombings and the terrorism. There has been much talk of sinister forces at work. Only the events of history will reveal them. However, one thing remains abundantly clear: there should have been a decisive, immediate and powerful response from the government from the very beginning.

Never before has such criminal viciousness been perpetrated on Nigerian womanhood. It strikes at the very heart of the Nigerian dilemma: What kind of nation does it want to be? A nation of intolerable lawlessness or a nation of justice, courage and fairness?

For too long Nigeria has failed to live up to the tremendous promise glimpsed at independence in 1960. The people of Nigeria cry out for justice. The girls’ abduction from Chibok, and transferral to the extensive Sambisa forests, is the nation’s wake-up call: an alarm has been ringing at a thousand decibels and no one has been paying attention. All it now takes is for one bomb to be dropped in the middle of Lagos for the country to be precipitated into a state of emergency, summoning the unwelcome presence of the military.

Dangerous spectre
Nigeria has been poised over an abyss for a long time. The attempt at secession gave rise to one bloody war. Various groups, disenchanted with their treatment within the nation, keep raising this dangerous spectre. The fact of Boko Haram raises it again.

The Nigerian military – by its own admission – feels unequal to the scale and complexity of the challenge; it has stated that it knows where the girls are but can do nothing about it because of its inexperience.

This is the moment for Nigeria to rise to its true stature and to bring ethical standards to its governance. There are only two roads to take: either more of the same, which will inevitably lead to further outrages and eventual fragmentation, or Nigeria wakes to the call that sounded at independence and begins again on that road towards its destiny as one of the great nations of the world.

What it does about the girls abducted from Chibok will, in a curious way, decide the future of Nigeria. It is odd to think that a nation’s destiny can hang on so palpable a cause for action. – © Guardian News & Media 2014