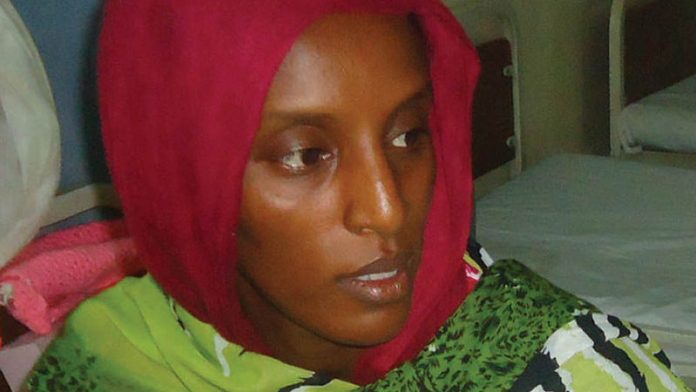 A Christian woman on death row in a Sudanese prison has been released on the orders of a court in Khartoum following an international outcry over her sentence and treatment.

Meriam Ibrahim (27) had been sentenced to 100 lashes for adultery and to be hanged for apostasy after refusing to renounce her faith. Her case triggered an international campaign, drawing in political and religious leaders, celebrities and human rights organisations.

Demands for her release accelerated after Ibrahim gave birth while shackled to the floor of her prison cell at Omdurman women’s prison. Her newborn daughter, Maya, and her toddler son, Martin, were incarcerated with her.

“I’m so happy,” Ibrahim’s husband, Daniel Wani, a US citizen, told the Guardian by phone from Khartoum on Monday. He said his wife and their two children were in relatively good condition, and he hoped that the family would soon be able to start a new life in the US.

Elshareef Mohammed, Ibrahim’s lawyer, said that she was “fine and very happy” but had been taken to a safe house amid fears that the family could be at risk of attack. The case against Ibrahim was triggered by allegations made by men claiming to be relatives, although Ibrahim denied knowing them.

Inconsistent claims
The news of her release was broken by the Sudanese state news agency, Suna, which said: “The appeal court ordered the release of [Ibrahim] and the cancellation of the [earlier] court ruling.” Judges had been hearing an appeal against Ibrahim’s convictions for the past two weeks.

Her lawyers argued that the case was based on weak and inconsistent claims and contravened Sudan’s interim constitution. Jehanne Henry, of Human Rights Watch, said: “Obviously this is good news and it shows that the appeals court sought to uphold rights. This is the outcome we were hoping for because there was a clear legal basis for releasing her.”

Ibrahim’s conviction and sentences were “such a blatant disregard of fundamental human rights that it provoked quite an outcry”, she said. “It’s quite possible that international pressure had an influence.”

Ibrahim was convicted of apostasy after the court insisted she was a Muslim because her father was a Muslim, even though Ibrahim said she had been brought up as a Christian after her father abandoned the family when she was six.

‘Absolutely appalled’
Following her conviction last month, she was given three days to renounce her faith or face a death sentence. Then eight months pregnant, she was told that her death sentence would be deferred for two years to allow her to nurse her unborn baby. The leaders of Britain’s three political parties backed a campaign to get Ibrahim released.

David Cameron said he was “absolutely appalled” by her sentence. “The way she is being treated is barbaric and has no place in today’s world. Religious freedom is an absolute, fundamental human right,” the prime minister said.

The US state department said it was “deeply disturbed” by the case and called on Khartoum to respect the right to freedom of religion. Hillary Clinton, Tony Blair, Jesse Jackson and Justin Welby, the archbishop of Canterbury, were among high-profile international figures calling for the sentence to be dropped.

A demand by Amnesty International for Ibrahim’s release won the support of more than one-million people worldwide. Thousands rallied to a Twitter campaign, #SaveMeriam.

The actor Mia Farrow urged her followers to “bombard” the Sudanese embassies in London and Washington with demands for Ibrahim’s release, supplying the relevant phone numbers. Sarah Jackson of Amnesty said on Monday: “Today’s ruling is a small step to redressing the injustice done to Meriam.

However, she should never have been prosecuted. Meriam was sentenced to death when eight months pregnant for something which should not be a crime. Furthermore, her abhorrent treatment, including being shackled, violated international human rights law against ill-treatment.”

The US government is now likely to come under pressure to allow Ibrahim to settle in the US by granting asylum or citizenship on the basis of her marriage. Ibrahim and Wani were married in a Khartoum church in December 2011. Under Sudanese law, it is forbidden for a Muslim woman to marry a Christian man. However, Ibrahim claimed in court that she had been brought up as a Christian by her mother after her Muslim father left the family.

She had attended church regularly. Wani – who is originally from South Sudan – said that she was more committed to her faith than he was. A statement signed by Father Mussa Timothy Kacho, episcopal vicar for Khartoum, said Ibrahim had “never been a Muslim in her life”.

The couple had business interests in Khartoum including a hair salon, a mini-mart and agricultural land. In 2013, a man who claimed to be Ibrahim’s brother alerted the Sudanese authorities to what he believed was an unlawful union. In May, the court declared the marriage invalid, and Ibrahim guilty of adultery.

She was sentenced to a public whipping, and to be hanged for apostasy. Ibrahim was held in what human rights organisations described as atrocious conditions with limited access to medical care and legal representation. Wani was permitted only brief visits to his family. He said his wife and children were being held in inhumane conditions.

Hopes for Ibrahim’s release were raised three weeks ago when a Sudanese foreign ministry official said she would be freed imminently. The Sudanese government swiftly issued a statement saying Ibrahim could only be freed on a court order, not as a political decision. – The Guardian