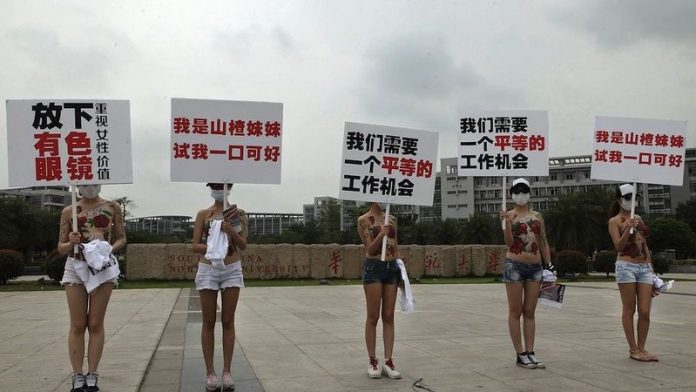 When half a dozen topless women took to the roadside in Guangzhou city recently bearing signs calling for female equality, it looked like the latest in a series of imaginative stunts by young feminists.

In the past couple of years, performance-art style actions – often cheeky or humorous, always eye-catching – have raised awareness of the challenges facing women in China.

The truth about the Guangzhou incident is even more curious. Those involved in the previous events say the women in body paint were nothing to do with them, and are convinced it was a viral marketing stunt for a soft drinks brand. At least a couple of them are oddly cheered by this.

“It shows our activities have had an impact,” said Xiao Men, who, like the others, uses a nickname.

New nor imported
Feminism is neither new nor imported in China. In the late 19th and early 20th centuries, writers such as Qiu Jin raged against footbinding and the denial of education to girls; Lin Zongsu sought female suffrage, while anarcho-feminist He-Yin Zhen tackled labour and sexuality in complex writings that remain remarkably fresh.

Women played an important part in the Communist Party’s rise to power, and in the early years of the People’s Republic, women’s rights saw huge advances.

In the past “there were many feminists like Deng Yingchao [who led the party’s women’s programme] who said women held up half the sky,” said activist Da Tu.

“But gender discrimination is getting worse,” said Li Maizi. Women’s wages have fallen as a proportion of men’s since economic reforms began and their rights to marital property were reduced by legal changes in 2011.

The percentage of women in the labour force is high – just below the United States rate at 73.6%, according to the 2010 census – but the proportion of urban women who work has declined from more than 77% two decades ago to barely 61%. Assets are overwhelmingly in male hands and less than a fifth of rural land-use contracts include wives’ names. There are only two women on the all-powerful politburo and no woman has ever reached its standing committee, the most senior political body. The proportion of women on the party’s 200-strong central committee has slipped to less than 5%, lower than in Mao’s day.

Discrimination starts before the cradle. Modern technology combined with the preference for boys means that there are almost 118 male births for every 100 female.

“In the past, women had a strong and independent image. Now on TV it’s just big-breasted women cleaning the house … There are insults about gold-diggers. Across the media, they just have a really bad image of women and never show their achievements,” said Da Tu.

Feminists are dismissed as “man-haters … people who want to step on men’s heads, aggressive. I feel very disappointed.”

‘Only attractive women need apply’
Companies rarely face punishment for sex discrimination, though it is illegal. Adverts routinely specify that only men need apply, or only attractive women. “Women care about their careers but they don’t get any support. Their families just want them to get married as early as they can. Then, when they do, the marriage laws won’t protect their property rights,” said Xiao Men.

“When women face discrimination they don’t fight against it because they weren’t raised this way, and even if they try to, they don’t know how to do it. I think all women know something’s wrong, but they don’t know what it is or why.”

Even so, they are optimistic that change will come. Li Maizi cites the case of Xiao Meili, who hiked almost 2 000km from Beijing to Guangzhou this spring to raise awareness of sexual abuse.

“She did it step by step; she went to villages and talked to people about women’s rights,” she said.

Other women have sung on the Beijing subway to mark the International Day for the Elimination of Violence Against Women and posed outside government offices in protest at discriminatory village regulations.

“This is still the beginning; you don’t have to fix your identity to a certain circle,” said Li Maizi. “As a feminist you should rethink things for yourself and not become one of the middle class who just deals with issues that only affect a certain number of women.” – © Guardian News & Media 2014