‘For our love of dagga we go to court’ 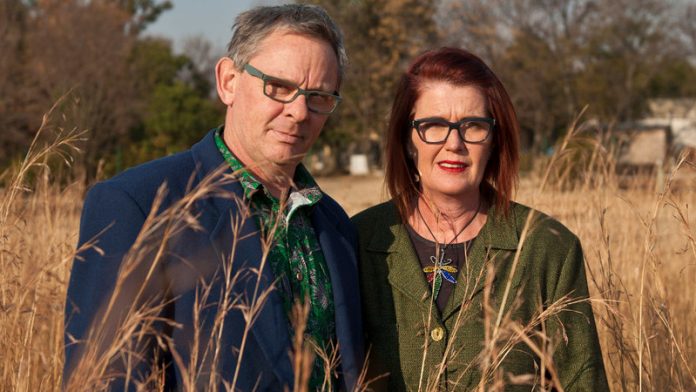 The media dubbed them the “Dagga Couple”, but Myrtle Clarke and Jules Stobbs have made the name their own, proudly carrying on a campaign to have the recreational use of dagga legalised in South Africa.

Nomenclature is important to them. They’re not fighting for marijuana (“Americanism”, says Jules) or hemp (“industrial cannabis”) or medical marijuana (“it confuses the real value of the plant”) or dope (“a 1950s propaganda word”), but dagga, cannabis or zol (“good local names for a great local plant”).

Their fight started in August 2010 when their Lanseria plot was raided and they were arrested on charges of possessing and dealing in dagga.

In February 2011 they appeared in a magistrate’s court and applied to be heard in the Constitutional Court, based on their contention that it is their “human right to ingest anything we choose to, providing it does no harm to us, or others”.

In March next year the couple will face the court to challenge the constitutionality of sections 4(b), 5(b) and Part III of Schedule 2 of the Drugs and Drug Trafficking Act, 1992, as it pertains to dagga. The Mail & Guardian spoke to the Dagga Couple.

Why the willingness to continue the fight?

We owe it to the plant. Between us we have used it for over 50 years for relaxation, concentration and creative inspiration. And to stop this madness, to stop the corruption around it. We could have paid a R40 000 bribe or faced charges of possession and dealing, but we looked each other in the eye at that first court appearance and made the decision: “We will fight for what we believe in.”

That dagga is not the “dangerous gateway drug” it is made out to be, that outdated laws originally based on racism keep it illegal.

That what we do in our own home as adults should be of no consequence to others and that the police should certainly not waste time on prosecuting people like us for something that doesn’t hurt anyone.

What is the solution?

A clear and simple regulation process from seed to spliff. Legalise it and regulate it. We envisage tiers, for instance home users may grow, for their own use only, say, a max of 10 plants. Community groups may grow, say, up to 99 plants for their members to share. Commercial and wholesale operations would have their own limits.

You’ve started an NGO called Fields of Green for All. Why?

Because we feel the first case in the world where the government is being taken to the Constitutional Court to legalise the recreational use of dagga, in the first country that outlawed it [see below], should have our full-time attention.

It is all super legit, and we’re starting a crowd-funding campaign among other things to assist us in our high court case in March 2015, go to the International Human Rights Court to get recreational use legalised internationally and to take part in the 2016 UN Drug Policy conference.

The major fund-raising is to pay for expert witnesses for the court case – both for their transport and their professional fees – because all the research around dagga is being done internationally.

Ansie Vicente is an editor at the Mail & Guardian. Follow her on @ansievicente

1911: Massachusetts becomes the first state in the United States to outlaw cannabis

1912: International Opium Convention signed. The convention is a League of Nations effort to control “morphine, cocaine, and their respective salts”

1919: The International Opium Convention is included in the Treaty of Versailles in 1919, making it of worldwide effect

1923: The South African government suggests that “Indian hemp” be included in the International Opium Convention, making cannabis illegal except for “medical and scientific use”

1925: South Africa’s suggestion becomes international law, after being accepted in 1924

1937: Passing of the Weeds Act, which placed the onus on the occupier or owner of a property to prevent land being used to produce cannabis, or any other plant declared a “weed” in South Africa

Source: Prohibition & Resistance: A Socio-Political Exploration of the Changing Dynamics of the Southern

Excerpts from the era of the Great Blue Fog

Drug abuse or drug use?

On the road with heroin smugglers

Cape Town’s rehabs for the rich and infamous