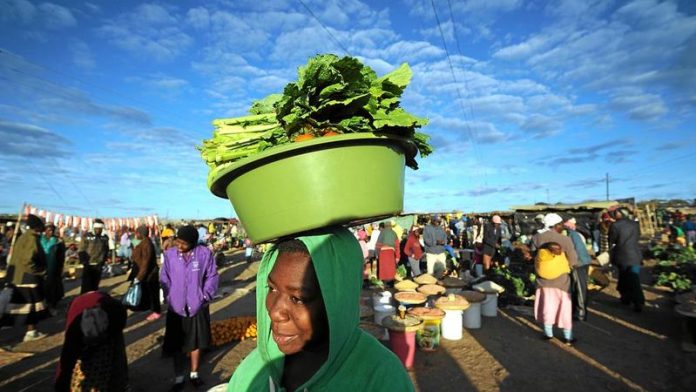 From informal markets to commuter transporters, no tree is being left unshaken as Zimbabwe’s taxman gets tough to raise money for an increasingly desperate government.

With almost no foreign budgetary aid, Zimbabwe funds itself entirely on what it collects from taxes on companies and individuals.

This makes Gershem Pasi, head of the Zimbabwe Revenue Authority (Zimra), a very important man, but also now ever more the caricature of the much-despised taxman.

Zimra hopes to exceed its $4.1-billion revenue target for the year. In the first quarter of 2014, Zimra collected $805.48-million, just short of the $873.3-million target for the quarter and below the $837.9 million collected over the same period last year.

As company closures and job losses increase, traditional sources of income – corporate and income tax – are shrinking fast. Now the taxman is looking at the informal market, which is now by far the economy’s largest employer, for relief.

Resistance from informal market
But Pasi faces strong resistance as informal traders, transporters, farmers and even the police – all now in Pasi’s sights – vow to fight him off.

It is getting harder to rely on the formal market for tax dollars. More than 2 000 jobs have been lost since January, according to the Zimbabwe Congress of Trade Unions, and the Confederation of Zimbabwe Industries says industry is operating at just 30% of its capacity.

The government believes up to $7-billion may be circulating ­outside the formal economy, although independent economists doubt that figure.

But although the informal market is booming, its small businesses are not paying taxes. This has attracted the attention of a government desperate for money.

Getting money out of the informal market will not be easy. It is a large, disorganised market and there is resistance.

At a flea market in Bulawayo recently, police had to be called in after a stand-off between stall owners and Zimra agents who had raided the market to demand proof of tax payments.

Senior Zanu-PF officials are apparently worried about the effect a blitz on the informal market may have on the party’s support base.

But Pasi continues to make enemies in his mission to collect tax.

He caused controversy when he claimed last week that police were collecting up to $7-million a month from roadblocks but were keeping all of it for themselves.

Pasi was “ignorant”, said police spokesperson Charity Charamba, and his “utterance is a big falsehood which is intended to whip [up] public emotions against police in pursuance of an obvious agenda”.

The police’s response was surprisingly scathing, especially because it was referring to another arm of government, and reflects friction within the government over the new tax crusade.

But Zimra appears determined to shine its light into every hidden corner. One such area is the chaotic public transport sector.

Pasi has laid out an ambitious plan, which includes forcing mini-bus drivers to use meters and to fit taxis with GPSes to track their movements.

Predictably, operators this week vowed to resist the plan.

Warning to government
The government has been warned against a heavy-handed approach to taxing the informal market.

“It will be like killing the goose before it lays the eggs,” Indian ambassador Jeitendra Tripathi recently told a business meeting.

His country has one of the largest informal markets in the world, accounting for half of its economy and employing about 90% of its workforce.

About 40% of small and medium enterprises (SMEs) in Zimbabwe make no more than $200 a month, official data shows.

This means that, even before the additional burden of taxes, many people in the informal market are barely able to get by.

More than 85% of SMEs are unregistered and only 14% of business owners have bank accounts.

Zimra officials say they have a plan that will make it easier to target traders. Traders would be housed in “a departmental store format” with a central payment system.

But an association of traders said small businesses have always resisted being herded into organised markets.

“The overall strategy of Zimra in bringing the informal sector into the tax net is education of some of the taxpayers, who may not be fully appreciating their legal obligations,” Zimra says.

This week, the government made the unpopular decision to force resettled farmers, the bedrock of Zanu-PF support, to pay annual rentals of up to $3 a hectare for their farms, which were given to farmers under its resettlement programme.

Many of the large mansions being constructed in Harare’s suburbs are being built by wealthy businesspeople evading tax, he has charged.

“We want to be able to say you have taken our money and you have used our money to build that house, and therefore the property belongs to us,” he said

Pasi also proposed to tax banks for money held offshore, a proposal that he has agreed to shelve to allow the central bank to reform banking laws.

With Finance Minister Patrick Chinamasa already preparing his mid-term budget statement, the pressure on Zimra to perform is growing.

But during that search for money, Zimra’s tally of enemies will also undoubtedly grow.

Zimbabwe opposition leader Morgan Tsvangirai may want to up his street cred, but he'll have to find a way to leave the house first.
Read more
Africa

It's payback time for those who can't afford to say no to the ruling party preparing for its congress.
Read more
Africa

Political largesse broke the Reserve Bank of Zimbabwe; now the state wants the public to fill up the coffers, but they are not amused.
Read more
Africa

The questionable award of a doctorate to the first lady threatens to tarnish the University of Zimbabwe's reputation.
Read more
Africa

Doubt has been cast on the authenticity of the first lady's PhD, which bolsters her bid for a top party post.
Read more
Advertising