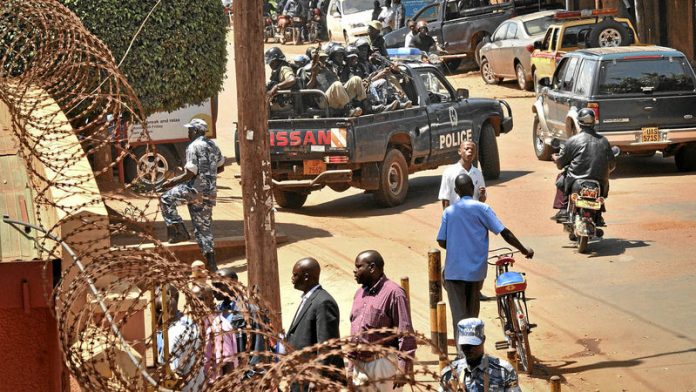 It was not immediately clear what sparked the violence but the region has been hit by recent communal violence between Christians and Muslims and is also an area where an Islamist rebel group is known to operate.

“There was an attack by tribal gunmen on our barracks in Bundibugyo and we repulsed them, killing, so far, 41 of the attackers. The operation is ongoing,” Uganda’s army spokesperson, Paddy Ankunda, said.

“It is an ugly situation but we have brought the situation under control,” he added, saying three soldiers and three family members were also killed in the violence, during which the attackers also stole 12 guns and grenade launchers from the army.

Ugandan police spokesperson Fred Enanga said one officer was killed in the neighbouring district of Kasese – close to the Rwenzori mountains – on Saturday when unidentified gunmen attacked a police checkpoint.

Uganda’s New Vision newspaper said the overall toll from Saturday’s violence stood at over 50 dead and said additional security forces have been deployed to the area as reinforcements.

The clashes came hours after the army announced it had killed a person suspected of involvement in an attack by Muslims on a church in the border region two weeks ago during which a woman was decapitated by suspected Muslim attackers and her head placed on the altar.

That attack in turn prompted retaliatory attacks against Muslims by Christians, according to Ugandan media reports.

Both the army and police denied the attacks were related to any rebel group, instead blaming local tribal and communal tensions.

“The Kasese and Bundibugyo attacks are linked to tribal differences, not the ADF,” Ankunda said, referring to the Allied Democratic Forces, an Islamist rebel group fighting the Ugandan government and based in the Democratic Republic of Congo border region.

“We have captured three of the attackers and we are interrogating them. We will get to know who is behind it,” Ankunda said.

On Tuesday, the United Nations Security Council decided to slap sanctions on the ADF, which is accused of recruiting child soldiers, sexual abuse of women and children and attacks on peacekeepers in the DRC’s eastern Kivu region, home to myriad rebel groups.

The ADF reportedly has ties to Somalia’s al-Qaeda-linked Shebab rebels, which have also carried out attacks on Ugandan soil in retaliation for Kampala’s support for an African Union force helping Somalia’s internationally-backed government. –Sapa-AFP