Chatty chimps know their ooks from their eeks 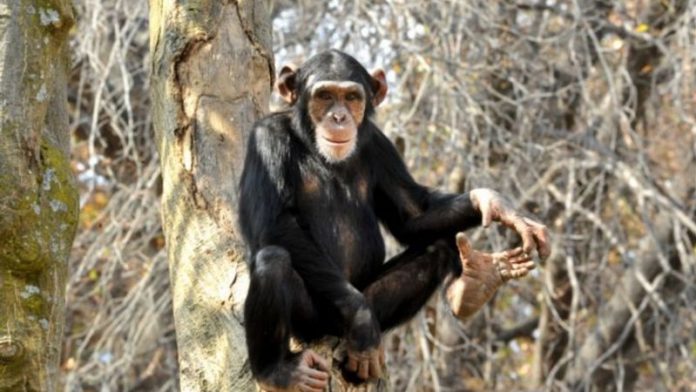 People say a lot with their body language: forbidding crossed arms, a gleeful smile, an eye roll, and thousands of other silently communicated cues. And a research team from the University of St Andrews in the United Kingdom has found that chimpanzees are no different, and have compiled a “dictionary” of chimp communication.

Through observing 80 wild chimpanzees in Uganda’s rainforest, primatologists Dr Catherine Hobaiter and Professor Richard Byrne identified more than 4 500 instances of gesturing – such as arm raises, ground slaps and foot stomps, and distilled this into 66 gestures with specific meaning.

The findings were published in Current Biology. “There is abundant evidence that chimpanzees and other apes gesture with purpose,” said Byrne.

“Apes target their gestures to particular individuals, choosing appropriate gestures according to whether the other is looking or not; they stop gesturing when they get the result they want; otherwise they keep going, trying out alternative gestures or other tactics altogether.

“It has been known for over 30 years that chimpanzees communicate in this way, but oddly enough nobody has attempted to answer the obvious question: What are these apes actually trying to ‘say’?”

For example, “when a chimpanzee taps another it means ‘stop that’; a hand fling or slapping an object means ‘move away’; while an arm raise means ‘I want that’ or ‘give me that,'” the university said.

In the same way a human’s body language can have a number of interpretations, so chimps “use more than one gesture for the same purpose – especially in social negotiations, where the final outcome may be a matter of some give and take,” Hobaiter said.

“Now that the basic chimpanzee gesture ‘dictionary’ is known, we can start to tackle other interesting questions. Do some gestures have very general meanings, where their intended sense is understood from the context? Or do subtle variations in how a gesture is made determine which sense was meant?” she said.”Apes target their gestures to particular individuals, choosing appropriate gestures … “