Zim: Mujuru brings her base to heel 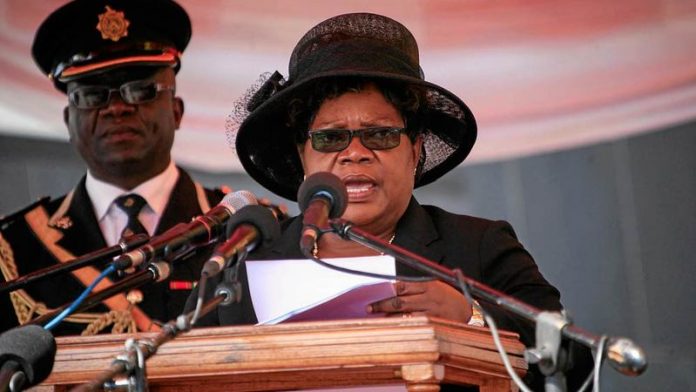 Vice-president Joice Mujuru has tightened her grip on her home province, ­Mashonaland Central, after party members sympathetic to her presidential ambitions allegedly caused the suspension of youth executives aligned to a faction led by Justice Minister Emmerson Mnangagwa and replaced them with a pro-Mujuru executive ahead of the Zanu-PF youth conference in August.

The trio had reportedly refused to work with Mujuru and are now likely to miss the youth congress in August, which will precede Zanu-PF’s main congress in December.

The Mashonaland Central youth provincial council met on Thursday last week and elected Mujubheki Maodzeka as acting chairman. Stanlas Mugari was elected acting secretary for administration. They will be in office until the suspended trio appear before a disciplinary committee after six months, meaning they will miss the crucial congress that will elect Zanu-PF youth executives for the next five years.

‘Illegal’ suspensions, meeting
Zanu-PF youths from the province, who are aligned to Mnangagwa but spoke on condition of anonymity, insist the suspensions were “illegal” and only meant to aid Mujuru’s succession bid.

“Even the meeting that elected a new executive was illegal. They did not have a quorum. Forty members of the provincial executive were meant to attend but only 16 attended, so there was no quorum,” said a youth executive member.

“This is the same thing that happened to provincial executives ahead of provincial elections last year. We had chairpersons being purged in provinces such as Manicaland, Masvingo and the Matabeleland region,” they said.

“History is now repeating itself and this is unfortunate. Even when she lost the District Co-ordinating Committee [DCC] elections in 2012, Mujuru used her influence to ensure that the DCCs were disbanded altogether. This is not democracy”.

Sintu refused to comment, referring questions to Tsenengamu, who said he was not at liberty to discuss any party matters while suspended. Karima could not be reached for comment. The suspension of the youth executive members means that Mujuru continues to tighten her grip on her home province since her faction members controversially won provincial elections last year, with Luke Mushore beating the Mnangagwa-aligned Dickson Mafios.

The elections led to a public spat between the minister of media, information and broadcasting services, Jonathan Moyo, on the one side, and President Robert Mugabe’s spokesperson, George Charamba, and Zanu-PF’s secretary for administration, Didymus Mutsa, and party spokesperson Rugare Gumbo on the other.

Results
Charamba, with the support of Moyo, insisted the election results were not endorsed by Mugabe and the politburo, whereas Gumbo and Mutasa insisted the results were final, arguing Charamba was Mugabe’s spokesperson and had no mandate to comment on Zanu-PF issues.

In 2012, a year after her husband General Solomon Mujuru died in a mysterious fire at his house, Mujuru appeared to be losing grip in Zanu-PF and particularly in her home province. General Mujuru was the faction’s chief strategist.

Candidates aligned to Mujuru even lost internal party elections in her home district of Mt Darwin, which was interpreted as a sign she had lost her grip and was struggling without her husband’s guidance.

She has, however, managed to rally, using her influence to ensure the DCCs are dissolved. She managed to convince Mugabe that the DCCs had become hot spots for factional fights, resulting in the politburo disbanding them in 2012.

She used her influence to suspend a provincial executive hostile to her last year and managed to win elections in nine of the country’s 10 provinces.

The Zanu-PF national elections directorate – chaired by Simon Khaya Moyo and consisting of the party’s political commissar, Webster Shamu, and Mutasa, who are all members of the Mujuru faction – have also ensured she regains control of Zanu-PF.

The national elections directorate was instrumental in purging provincial executives aligned to Mnangagwa and ensuring the faction’s candidates won the disputed provincial elections, which will come in handy at the December congress when national leaders are once again chosen.

Mujuru’s office did not respond to questions.