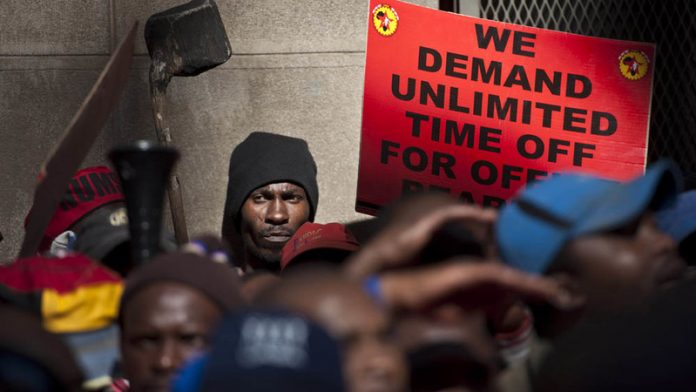 The Steel and Engineering Industries Federation of Southern Africa (Seifsa) hopes to secure a wage settlement in the metal sector through the bargaining council, the employer body said on Wednesday.

“Regrettably, our genuine efforts to bring the strike to an end as soon as possible were not successful,” Seifsa chief executive officer Kaizer Nyatsumba said in a statement. “We have now decided to work with all stakeholders within the bargaining council in the hope of securing an agreement.”

He said the federation would focus on discussions with all affected parties under the auspices of the Metal and Engineering Industries Bargaining Council (MEIBC).

“We welcome the fact that the MEIBC has scheduled a facilitated plenary session to take place this week.” The federation would continue to work with the other employer bodies, he said.

MEIBC represents the leadership of the various employer associations affiliated to Seifsa.

National Union of Metalworkers of South Africa (Numsa) deputy general secretary Karl Cloete said the meeting at the bargaining council would probably be held on Thursday.

‘Discuss the strike’
“The parties are scheduled to meet with the labour minister in Pretoria today [Wednesday] to discuss the strike. We will see what transpired in that meeting,” he said.

He said the employer and the union were not too far apart.

“We want 10% over a year and they want a three-year agreement.”

Numsa members downed tools on July 1, initially demanding a salary increase of 12% – dropped from their pre-strike demand of 15% on Sunday – a R1 000 housing allowance, and a total ban on labour brokers.

The National Employers’ Association of South Africa has offered an across-the-board increase of 8%, subject to a lower entry-level wage for new employees and measures to make the industry more flexible. It argues these conditions would help stimulate business and economic growth, and consequently create jobs.

‘Essential building components’
Nyatsumba said the strike cost the industry R300-million per day and was damaging the economy as it has affected other related sectors, such auto manufacturing. He added that the union was considering a secondary strike at all companies that linked with the metals and engineering sector.

“Work has slowed down substantially on building sites as MBSA members are deprived of essential building components, such as steel plates, framework, pipes, windows and doors, or any other metal component produced by factories affected by the Numsa strike,” said chief executive Tumi Dlamini in a statement.

“The plumbing industry has reported a critical shortage of geysers, and the piling sector, which relies heavily on steel reinforcement for foundation work, is struggling to obtain supplies.”

She said there was intimidation outside factories, which meant MBSA members could not collect roof sheeting and structural steel.

“The aluminium sector is struggling to supply building contractors with materials for windows, fenestration, and cladding … The increasing woes of the building industry have been well-documented and this new setback could well be the last straw for many struggling contractors,” she said.

Dlamini added that any solidarity strikes would harm the entire economy. – Sapa