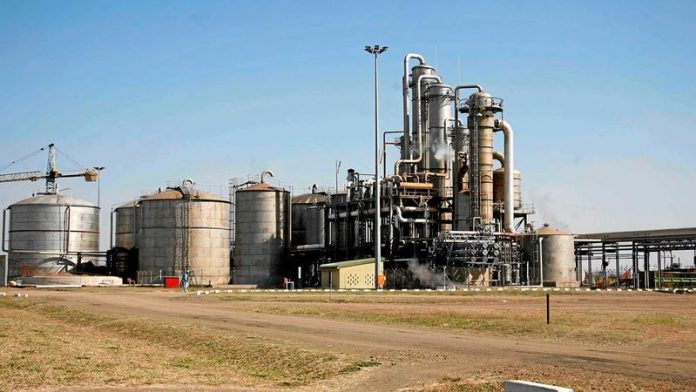 The new road that cuts through a maize field marks the new divide between the multimillion-dollar ethanol factory and the poor villagers fighting against it.

It is just the latest in a long running battle between the company, owned by billionaire businessman Billy Rautenbach, and villagers in Chisumbanje, in the country’s sugar-growing lowveld.

The gleaming new $600-million factory stands like a silver island amid the poverty of the surrounding villages, and is a monument to a new Zanu-PF dilemma: how to pick sides in an escalating war between a powerful benefactor and the poor villagers who have voted for the party for years.

Green Fuel has been controversially awarded the right to produce ethanol for the country. Ignoring criticism from car manufacturers and motorists, the government has feathered Rautenbach’s nest by forcing fuel companies to blend imported petrol with ethanol from Green Fuel.

From a 5% blend just over a year ago, the government now demands a 15% blend.

The more that level moves up, the more money Green Fuel makes, but the increase also means the company needs more cane to meet demand.

Villagers angry at ‘land-grabbing’
For the villagers in the shadow of the factory, this has meant losing more and more of their land to the company. Villagers say their land has been grabbed without compensation.

According to Claris Madhuku, a local activist who is campaigning for more compensation for villagers, Rautenbach’s is a “legacy of labour-rights-flouting, land-grabbing, ruthless disruption of the people of Chisumbanje’s way of life, all for profit”.

Peasant farmers are angry, and accuse their local traditional and political leaders of failing to protect them, and for siding with Green Fuel.

At the local shopping centre, dozens of peasant farmers gathered for a meeting last month.

One man shouted at their local MP, Enock Porusingazi, saying Porusingazi had sold out to the “white man” by allowing their land to be taken from them with little compensation.

“They are conniving with the white man. Our own politicians are profiting from the project, not us,” the farmer said, to loud cheers.

Soon, this conflict will worsen. As Green Fuel gets more government concessions, its hunger for more land will grow.

Green Fuel plans to set up an additional four plants in the country, raising output to 1.5-billion litres annually by 2018. The company will increase its sugar cane plantations nearly fourfold to 46 000 hectares from the current 9 500 hectares.

Resistance
In Green Fuel’s path will be ­hundreds of poor cane-growing communities, who must now either make way or surrender themselves as cheap labour to the company. Many are resisting, presenting serious problems for political leaders. The plantations are Zanu-PF strongholds, but the politicians are finding it hard to convince their supporters to back Green Fuel.

Rautenbach has long been rumoured to be a Zanu-PF funder, a charge he has denied, and is also said to have saved the government by agreeing to fund agriculture last year. In exchange, the government would enact laws forcing Zimbabweans to use Green Fuel’s ethanol.

Senior Zanu-PF officials have admitted to directly supporting Rautenbach, but they must deal with restive supporters, strongly opposed to how his company is bullying its way through the lowveld’s cane fields.

“Never. We can never give up any more of our land to the white man [Green Fuel]. If this continues we will storm the plant,” says James Maphosa, who is a war veteran and Zanu-PF supporter.

Cane growers say the company had promised to pay growers $4 a tonne, a promise it is failing to honour.

According to Madhuku, Green Fuel has taken over 2 600 hectares of land from the community. The company, he says, has encroached on to villager’s land with no permission, ploughing crops under and pushing hundreds into poverty.

2000 families displaced
Close to 2 000 families have been displaced by the factory, with only a quarter of those resettled. Many of the families are yet to be compensated.

Green Fuel official Raphael Zuze has denied the allegations, insisting the company has spent millions investing in the neighbouring communities.

Near one village, a farmer points to a stream he says was once a water source for the community. Now, a film of grey grime covers the stream, and villagers blame the factory for the pollution. The company denies this, saying it is in fact providing irrigation, electricity and stock feed to villagers.

“We are positive that very soon the community will have different stories to tell,” a Green Fuel representative said. “This used to be a cotton-farming area and people are not yet used to shifting from cotton to ethanol production.”

But there is little sign villagers are close to accepting Green Fuel as a neighbour, or forgiving their political leaders for supporting the company.

When their local MP visited last week, as part of a team of MPs looking into the conflict, he faced only hostility.

“We don’t want you here. You do not represent us any more,” a villager shouted at him.