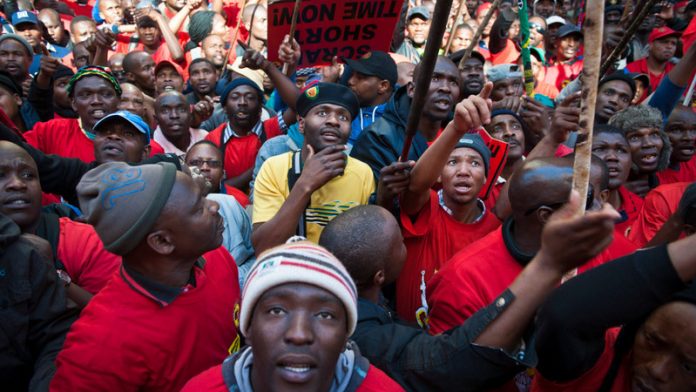 Unions in the metals and engineering sector have put forward a wage proposal in a bid to end the three-week long strike, but a potentially bigger challenge remains as employer organisations meet to thrash out what they can and cannot afford.

Minority trade union Solidarity said it had presented the employers on the Metals and Engineering Industry Bargaining Council with a new consolidated wage proposal, which constitutes a three-year agreement with an increase ranging from 8% to 10% for different employee levels in year one, two and three.

This improves on a proposal made by the department of labour on Saturday, which stipulated 7.5% and 7% increases in years two and three.

“The aim of the new proposal, made after facilitation with the Commission for Conciliation, Mediation and Arbitration and the department of labour, is to bring about a settlement and to end the strike in the industry,” the union said in a statement.

Marius Croucamp, industry head of the metals and engineering sector, said the parties were drawing closer to reaching an agreement, but that the biggest difficulty in the negotiating process was that the employers were still divided with regard to their mandate.

Unions vs employers
The Steel and Engineering Industries Federation of South Africa (Seifsa) claims to represent just 2 000 of 10 500 registered employers in the industry and, these being some of the largest employers, they represent about 200 000 out of an estimated 300 000 employees. According to the Labour Relations Act, Seifsa’s representation means it can broker and sign a bilateral wage deal with the largest union.

The National Employer’s Association of South Africa (Neasa) claims to have 37 000 small-to medium-sized companies on its books, although this only accounts for 70 000 employees.

Neasa, however, said its mandate from its members only went up to 8% and no higher.

Neasa also criticised the minister of labour for not consulting with small and medium business organisations, such as Neasa, and on Monday said it had turned down the settlement proposal tabled by the ministerial team and described it as further out of reach of small and medium-sized enterprises.

‘Accelerate job losses‘
Neasa’s chief executive, Gerhard Papenfus, said: “What is particularly disappointing is that the ministerial team proposed a settlement arrangement, which may satisfy the trade unions but accelerate job losses in the metals industry.”

In a press statement, Neasa said a short-sighted settlement would end the strike but would lead to long-term hardship across the board and eventually bring about socioeconomic instability.

“We would like to have one agreement,” said Croucamp, “But we are at the point where the strike is in its third week [and] it is extremely damaging.” He said if a deal could start being signed, members could at least return to work. “Our view is that Neasa will implement their offer [of up to 8%],” Croucamp said.

Wage proposal
Croucamp said the sticking point, which the new wage proposal addressed, was a higher wage increase for artisans. “There are other issues [we] will respond to. There is an issue around short time, the issue around labour brokers and the issue of time off for shop stewards, and an issue around artisan training – that we believe can easily be sorted out.”

Seifsa will meet to discuss the unions’ proposal on Monday afternoon and will meet with Neasa thereafter to relay the decision it has taken. The next meeting with the unions is expected to take place on Tuesday July 22, when the employers are expected to give feedback on organised labour’s reviewed wage proposal. Numsa has indicated it will only make a statement on the matter on Tuesday.