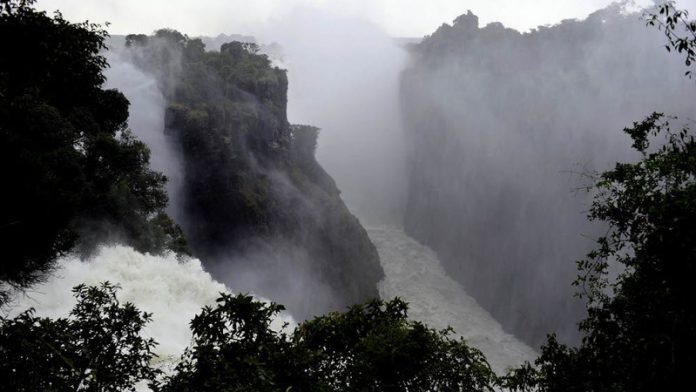 It’s four months before Zambia celebrates its 50th anniversary of independence. I’m in Livingstone with a group of South Africans, and we’re taking a slippery tour of the city’s main tourist attraction: the spraying, misting and roaring waterfalls.

We traverse under a canopy of lush tropical trees, glide over a wet bridge and make our way to the top of a peak where we see a rainbow. This is magnificent. This is the Victoria Falls on the mighty Zambezi River – and I’m here nearly half a century after Zambia broke free from its imperial masters.

Coming from South Africa, where name changes to roads and buildings – and the removal of effigies of apartheid leaders – make a bold statement as the country commemorates its break from an oppressive regime, I can’t help but question the name of the falls.

“We call it Victoria Falls, in honour of David Livingstone, and Mosi-oa-Tunya [the Smoke that Thunders], in honour of the Zambian people,” one of the tour guides stops to tell us proudly.

Standing before a bronze statue of Livingstone, whose motto was “Christianity, Commerce and Civilisation”, the tour guide briefly shares with us how the British physician, missionary and local hero named it after his queen, Victoria. And it’s this coexistence of the two names that opens me up to other binaries of the old and the new, colonial and traditional, that exist in the city.

Tradition and Christianity
This is Livingstone: home to traditional mythologies of the area’s Toka-Leya people and Christian churches on street corners. The city has a wealth of tourism generated from those streaming in to see the falls and game reserves, and a poverty line below which large numbers of people in rural areas live.

It’s a place renowned for its modest plates of creamy nshima (mealie meal) served with a ndiwo (relish) topping, as well as a fusion of gourmet dishes and local cuisine served at five-star hotels. But these ­contradictions and paradoxes tend to linger in any people or place affected by imperialism.

As a pre-independence day celebration, the group and I set sail on the Lady Livingstone on the Zambezi River and bask in a shower of sun rays. Cocktails and local beer in hand, with neighbouring Zimbabwe clearly in our sights, we toast to the sunset before I meet the boat’s captain, Newston Luundu, who chats to me about the country’s five decades of independence.

Along with his reservations about Zambian President Michael Saata’s Cabinet and the country’s 13% unemployment rate, Luundu is positive about the country’s status quo.

“I’m happy about Zambia’s 50th celebration … and that there’s not been any fighting in Zambia since gaining independence. I’m happy with the peace found in Zambia.”

And he’s right. The country is known to be politically stable.

“I’ve been living in Zambia for almost nine years,” Zimbabwean Eliah Chirava tells me while perched on an elephant at the Safari Par Excellence.

Xenophobia
He is one of the tens of thousands of Zimbabweans who fled from South Africa following xenophobic attacks between 2006 and 2008.

“My family lives on the Zimbabwe side of Vic Falls. I go home every 30 days and also send money back home. Zimbabwe will always be my home though,” the elephant handler smiles.

Added to the country’s political stability, a human rights report on Zambia released by the United States government last year highlights that the 2011 elections were “generally free and fair”. But serious human rights issues are noted, such as arbitrary arrest, violence and discrimination against women and people with disabilities and members of the lesbian, gay, bisexual, and transgender (LGBT) community.

“State says no to gay rights,” reads a headline of the conservative ­Zambia Daily Mail. “Homosexuality, unnatural act,” reads another.

Despite the country’s breakaway from British rule, certain draconian laws adopted on independence, such as Zambia’s penal code, deem homosexuality a punishable offence.

Jail sentence
As in Uganda, homosexuality was illegal under existing colonial laws in Zambia. “But [in the past] nobody was ever arrested or prosecuted based on those old laws,” an Independent report quotes Kipya Kaoma, a Zambian clergyman living in Boston, as saying.

“People turned a blind eye to it. Homosexuality was not a political issue.”

But ahead of the country’s golden jubilee celebrations, homosexuality can carry a 14-year jail sentence. The ministry of home affairs states: “The law is very clear; homosexuality is a crime according to our laws … it is an offence for any person to have carnal knowledge against the order of nature.” The old and the new; colonial and traditional.

Following our lion and elephant encounter in the game reserve, we are taken on a tour of the city’s Mukuni Park curio market, where we pick up decently priced chitenge cloth (a sarong-style batik cloth), makishi masks (of the spirits of the dead), and other mementos for friends and family in South Africa.

Driving down the spotless main road, Mosi-oa-Tunya, there’s a charming steam train that choo-choos by. Starving, we reach the local market – Maramba Cultural Market – to try out the local cuisine. Heaps of dried kapenta sardines and tilapia fish attract hordes of scavenging flies. Nonetheless, we indulge in the new textures and flavours of the ready-to-eat food on sale.

We discuss the disparities in the country with one of the shopkeepers in the muddy market.

“Poverty has always been around. Jesus says poor people will always be among us,” shrugs the shopkeeper, who asks to remain anonymous.

‘We are all Christians’
The October 24 celebrations take place under the theme “Commemorating God’s favour of Zambia’s 50 years of independence for continued peace, unity, democracy and prosperity”.

The shopkeeper fusses when I enquire whether he is a Christian. “Of course! Zambia is a Christian country; it’s been declared one. So by nature, we are all Christians.”

It was in the 1996 Constitution that Zambia was declared a Christian nation. And it’s this religion, according to a Zambia Daily Mail report, “that does not condone same-sex unions”.

It was in 1860 that Livingstone confessed that his desire was “to open a path to this district [Africa] that civilisation, commerce and Christianity might find their way there”.

Despite former president Kenneth Kaunda describing Livingstone as the first African freedom fighter, it’s hard to avoid linking the Scotsman to some of Africa’s modern-day missionaries, such as the Christian evangelicals from the US, who have been accused of exacerbating homophobia in Africa.

Lack of progress
Over a fried bream and nshima dinner at David Livingstone Lodge, the group and I discuss how far (or far back) the country’s come since Kaunda’s Cha-cha-cha civil disobedience campaign, which took place in the run-up to the country’s independence. But with reports of the arrest of members from the LGBT community, such as human rights activist Paul Kasonkomona – who was released in February – and couple Philip Mubiana and James Mwape – acquitted in July – it’s safe to say: not very far.

“Zambia is rapidly sliding down the path marked ‘Malawi under Bingu’, where an increasingly authoritarian government supported by a repressive police force trampled over human rights, democracy, good governance and the rule of law,” Richard Lee from the Open Society Initiative for Southern African said to the Daily Maverick in May last year, referring to Malawi’s former president Bingu wa Mutharika’s authoritarianism.

And there are concerns that Zambia could follow in the footsteps of Malawi and Uganda, which in February signed into law an anti-gay Bill – resulting in attacks on LGBT people, and the US placing travel restrictions on government officials and cutting aid to the country.

But on the eve of our final stay at the lodge overlooking the Zambezi River, one could only hope that the country’s future for its citizens isn’t doomed like the lyrics in Zamrock heroes Rikki Ililonga and Musi-O-Tunya’s 1970s hit Dark Sunrise suggest: We’ll burn every city before we bow down/ If you’re not strong in your mind you must get out.