To flee Gaza or not is a tough choice 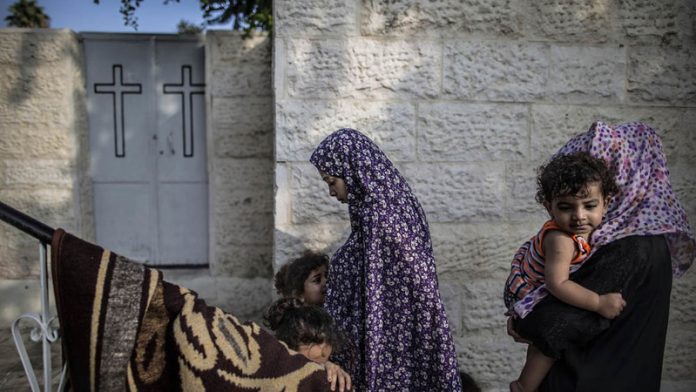 Archbishop Alexios of Gaza mopped his brow wearily in the upstairs office of his church, transformed in recent days into a shelter for hundreds of families displaced by the Gaza conflict.

His grey clerical robe undone at the neck and damp with perspiration, the archbishop was exhausted. On Monday night, the area around the St Porferios Greek Orthodox church – including its little cemetery – was shelled by Israeli forces.

“I only got to sleep at 6am,” he said. “We’re co-operating with the mosque next door. We’re looking after about 1 000 people between us.” All the people sleeping in his church are Muslims.

“People started coming in on Sunday, more and more people, so we couldn’t even think about holding our Sunday service. Now it’s crazy,” he added.

The vast majority of those in his church fled the heavy fighting in neighbouring Shujai’iya, which saw scores killed last Saturday and Sunday in the most intense Israeli assault of the conflict so far.

“We gave them blankets and water and money for food,” he said. Then on Monday evening, the area around the church itself came under fire.

Visible damage
From the roof terrace outside his office, where two women were sweeping up debris, the damage was clearly visible: the walls of the Protestant school next door are peppered with shrapnel, tombs are broken open or utterly destroyed. A church-owned house next door, where a family who had fled from Beit Lahia in the north had sheltered for a while, is damaged and empty.

“It started after the Iftar meal at about 7.30. The shrapnel even came into the monastery and destroyed our water tanks. The shelling was very strong and the children were crying,” the archbishop explained.

“They have an eye up in the heavens,” he said, nodding his head upwards toward the ever-present Israeli drones. “I don’t believe they intended to attack the church, but we are only a kilometre from Shujai’iya and we are in Zeitoun so the shells have been coming at us from both sides.”

A younger priest, Father Amfirohios, was more blunt: “The Israeli military know where we are.”

A man entered the archbishop’s office with a pile of shrapnel collected from the church grounds, razor-sharp fragments that he held out for inspection.

Exhausted
Inside the stone walls of the church on Tuesday, those sheltering were lying exhausted on benches or sleeping on the tiled floor of the church hall as children played around them.

Mohammad Sukr and his family were among the first to arrive at St Porferios a week ago, after the Israelis ordered residents of Shujai’iya to evacuate.

“The Israelis were shelling the open fields at first, then they started hitting houses. We were going to go to one of the United Nations’s schools at first but then someone told us that the church was open,” Sukr explained. He had returned home briefly on Sunday during a brief humanitarian truce and found his home had been damaged by the falling rubble of a neighbour’s house.

Sukr was interrupted by the sound of a shell fired a little way off, followed by the deafening boom of a rocket launched nearby out of Gaza towards Israel, which sent people running scared into the church’s hall.

“It was terrifying last night,” he continued. “The shells were falling all around [the church]. We tried to escape and were at the gate when the priest brought us back in.”

Unlikely shelters
It is not only the archbishop’s church that has been filled by those driven from their homes by the fighting. With more than 100 000 Palestinians displaced – according to UN estimates – UN schools have been opened as shelters. Other people have found refuge with relatives, dozens of people crowding into single rooms. Others have occupied shops and offices in Gaza’s city centre.

Israel and its Prime Minister, Benjamin Netanyahu, have blamed Hamas for the high rate of civilian deaths, insisting Hamas has turned Gazans into “human shields” or suggesting that Palestinians themselves are somehow responsible for not fleeing when the Israeli army has ordered them to.

The Gaza Strip is a densely populated enclave – about 1.6-million people in 378km2, sealed by an Egyptian and Israeli blockade. Israel has now ordered about 43% of the territory to be evacuated. The schools that have opened to receive those fleeing are already overcrowded – and many Palestinians in Gaza can recall how, in the 2008-2009 conflict, even those schools could not guarantee safety.

In the first days of the conflict, the Hamas-run interior ministry issued a statement urging people near the border to remain in their homes, dismissing Israeli leaflet drops, text messages and phone calls that they should evacuate as “psychological warfare”.

In the past week the Guardian has seen large numbers of people fleeing different neighbourhoods – including Beit Lahia, Beit Hanoun, Shujai’iya, Zeitoun and Maghazy – and no evidence that Hamas had compelled them to stay.

These crowds have joined the ranks of about 102 000 displaced people who, according to the UN’s figures, have increased fivefold in the past five days.

Tough decision
The decision of whether or not to flee is, in reality, a very difficult and complex process of weighing up often competing safety considerations.

“Where you live, you know who your neighbours are and they know you,” said one middle-class Gaza resident who recently evacuated and asked not to be named.

“You know if someone is Hamas or Islamic Jihad, if your building might be a target or if there is someone you suspect is an Israeli collaborator in the building, which might make it safer during an Israeli attack. I’m staying with relatives. The first thing I asked before I moved my family is who the neighbours are.”

Others explained their reluctance to flee their homes with their conviction that nowhere in Gaza is currently safe.

Sami Abu Arar has moved with his extended family to a car shop in the centre of Gaza City; a crowd of men were camped in the little office opening on to the street, the women were out of sight upstairs. A hundred metres away, a group of journalists was waiting for a building that had received a warning shot from an Israeli shell to be hit.

Another family occupied the barber’s shop next door, women and children crowded into the tiny space. – © Guardian News & Media 2014

The chief justice needs to publicly account for his comments, by either walking them back or explaining his change of heart on international law and its institutions
Read more
World

Security, corruption and the economy have been dominating the campaigns before Tuesday's vote
Read more
World