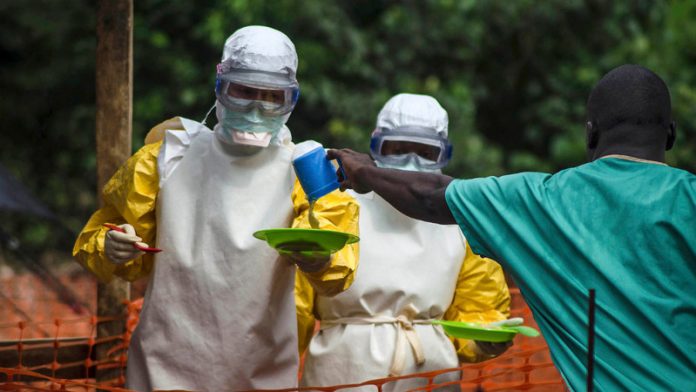 The international community has made “almost zero” response to the Ebola outbreak in West Africa, with Western leaders more interested in protecting their own countries than helping contain the crisis that has now claimed more than 1 200 lives, a senior international aid worker said on Tuesday.

Brice de la Vigne, the operations director of Médecins Sans Frontières (MSF), said politicians in industrialised countries urgently needed to take action, or risk the outbreak spreading much further. “Globally, the response of the international community is almost zero,” he said. “Leaders in the west are talking about their own safety and doing things like closing airlines – and not helping anyone else.”

His comments came as the World Health Organisation (WHO) announced that the death toll in the world’s worst Ebola outbreak has now exceeded 1 200. The haemorrhagic disease, which kills up to 90% of those infected, is ravaging Liberia, Sierra Leone and Guinea, and also has a toehold in Nigeria, Africa’s biggest economy.

De la Vigne, who has just returned from a tour of Guinea, Sierra Leone and Liberia, said the scale of the outbreak was comparable to a catastrophe such as the 2010 Haitian earthquake, which killed 300 000 people.

“The solution is not that complicated but we need to have political will to do so. Time is running against us. But you need very senior people with high profiles, the kind of people who can co-ordinate a response to a million people affected by an earthquake,” he said.

His words were echoed by Dr Gabriel Fitzpatrick, who is working at the MSF field hospital in Kailahun, the epicentre of the crisis in Sierra Leone.

“If this Ebola outbreak happened in a western community, in London, you’d get a few cases and that would be it,” he said. “The main objective here is not to dramatically increase the person’s chance of survival, it’s to contain the spread”

State of emergency declared
At least 810 cases of Ebola have been reported in Sierra Leone, and 348 people have died from the virus in the country, according to WHO figures.

Since June,  Fitzpatrick has been working in the MSF field hospital, processing patients through three initial stages with tents marked “suspect”, “probably” and “confirmed”. Once in the final tent, their chances of coming out alive are slim.

He described one family of nine wiped out after a grandmother contracted the disease on August 4. Death is swift – usually within four or five days.

Fear, rumours and conspiracy theories have conspired with poverty and high illiteracy to allow the disease to flourish in two countries whose infrastructure is already weak. “Both Sierra Leone and Liberia were at war 10 years ago and all the infrastructure was destroyed. It’s the worst place on earth to have these epidemics,” De la Vigne said.

Sierra Leone and Liberia have already declared a state of emergency, but health provision is reaching breaking point.

Sinead Walsh, who is working on the Sierra Leonean presidential Ebola task force, said the crisis was already causing deeper problems. She said more than one million people are in quarantine in Kailahun and neighbouring Kenema alone, businesses are closing, farmers are unable to trade and fears are rising about food shortages.

The disease is having a knock-on effect, with sick people afraid to go to hospital for fear of catching Ebola. Health workers fear deaths in childbirth and from malaria could now also escalate.

“We are gone beyond the stage of a health crisis. This is a humanitarian emergency now.” said Walsh. “We need to start working on the secondary crisis.”

“Not rocket science’
Fitzpatrick said the priority was to contain the disease, using local volunteers to find suspected cases and bring patients to hospitals where they can be isolated: “The second thing is to trace those who we know have been in contact and keep them under observation. We are not doing any contact tracing at the moment,” he said.

David Heymann, professor of infections disease epidemiology at the London School of Hygiene and Tropical Medicine, who headed the global response to severe acute respiratory syndrome (Sars) while working for WHO, said that outbreak took three months to contain.

“It’s not rocket science to do on a large scale across west Africa. But it needs an organisational structure and good leadership.”

Heymann says one of the differences with Sars is the outbreak happened in industrialised countries where systems for “infection control” were in place.

New drug
Meanwhile, findings published in the journal Science Translational Medicine could speed up efforts to bring a drug treatment against Ebola to the market. An experimental drug treatment can help monkeys survive an otherwise deadly infection with a tropical virus called Marburg, which is similar to Ebola, researchers said on Wednesday.

The study tested a Marburg virus drug, made by Canada’s Tekmira Pharmaceuticals, on 16 monkeys. One group was given the treatment 30-45 minutes after exposure to a lethal dose of the Angola strain of Marburg virus. Other groups were treated one, two and three days following the infection.

“All treated animals in all four studies survived,” said lead author Thomas Geisbert, professor of microbiology and immunology at the University of Texas Medical Branch at Galveston. The control group included monkeys that were sickened with Marburg virus but were not given the treatment.

They all died, beginning one week after they were infected. The discovery that the treatment worked even three days into the monkeys’ infections shows “real world utility of this technology”, Geisbert told reporters.

Experts are hopeful that such a treatment could be useful because symptoms of Marburg virus begin showing themselves around that time. Ebola, too, usually becomes symptomatic within two to 10 days of infection, though the incubation period can last as long as 21 days.

“The significance of delaying treatment until three days after infection, which is the earliest time at which diagnosis by viral RNA can be detected and those infected show the first clinical signs of disease, is a critical step in triggering clinical interventions,” said Ian MacLachlan, executive vice president and chief technical officer of Tekmira Pharmaceuticals.

For the drug to be deployed for “compassionate use during this outbreak” in people, there would have to be “a situation where a country or someone would request that from the company,” MacLachlan told reporters.

He added that there were “no problems” in terms of side effects with the doses given in the monkey tests.

Test trials have begun
Tekmira has begun phase one trials to test safety in people, and in March the company said it was granted a fast track designation by the US Food and Drug Administration to develop its drug, TKM-Ebola.

The drug works by interfering with how Ebola grows once it penetrates the cells of the body.

Another experimental Ebola drug, ZMapp, works differently, by delivering the body a cocktail of antibodies that target different parts of the Ebola virus. ZMapp has been given to a handful of people who were sickened in the latest outbreak, including to American missionaries, but it is difficult to make in large amounts.

Geisbert said the Tekmira product could be replicated “relatively quickly”, given the proper funding. Experts say that getting enough money to pay for trials and development has been a key challenge for drug makers, due the history of sporadic outbreaks in Africa. – The Guardian and AFP

Sierra Leone’s president cracks down on his predecessor