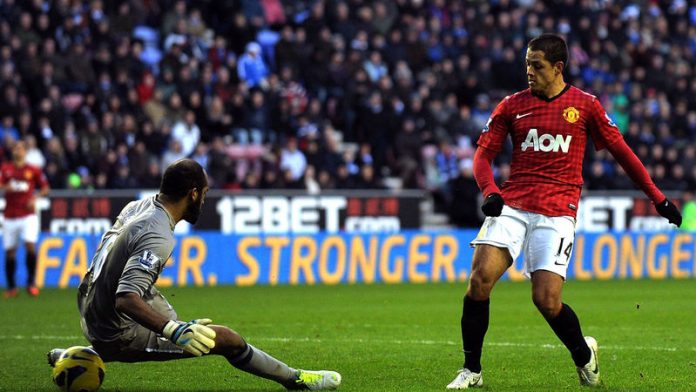 Real Madrid have moved to broaden their options in attack by agreeing to sign Mexico striker Javier Hernandez on loan from Manchester United for the 2014-15 season.

The European champions have an option to buy the 26-year-old Hernandez, who is known as “Chicharito” (little pea) and will provide backup for Real’s first-choice striker Karim Benzema, a France international.

Hernandez, valued at $18.4-million according to  transfermarkt.com, passed a medical and was presented at the club’s Bernabeu stadium.

“I don’t think there is a player in the world who would not say this is a dream, it would be a lie,” a beaming Hernandez told a news conference.

“I am coming to give my all so that this club can be more successful than it already is,” he added.

“I will give everything. I hope to contribute my grain of sand so that many trophies continue to come.”

Hernandez joined United from hometown side Guadalajara in July 2010, but after a fine debut season, when he scored 20 goals in all competitions, he has played mostly as a substitute.

He helped Mexico reach the last 16 of the World Cup in Brazil, scoring in the 3-1 group-stage win over Croatia.

Their next outing is at home to champions Atletico Madrid on September 13, when Hernandez could make his debut.

“I see it as a great opportunity, to do what I like most which is playing football,” he told reporters.

“The only thing I have in my heart is that I am grateful to those who have given me this chance. To be alongside the best players in the world and be able to develop and give everything to the club. I know that here 100% is demanded.”

Following swiftly on the heels of the British record signing of attacking midfielder Angel di Maria, Van Gaal appears to be ignoring the burning issue of a porous and inexperienced back line which has struggled badly in the first three Premier League games of the season.

Stalwarts Nemanja Vidic and Rio Ferdinand have left Old Trafford along with long-serving left back Patrice Evra. Although Marcos Rojo and Luke Shaw have been signed along with versatile Dutchman Daley Blind, Van Gaal’s defensive resources look thin unless he opts to do more business before the deadline closes at 10pm. – Reuters