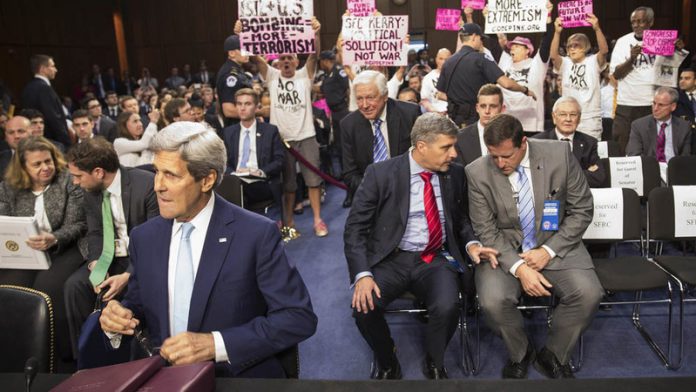 Barely a month into the latest American bombing campaign in Iraq, and they’re already talking escalation. Last week Barack Obama promised that his plans to destroy the so-called Islamic State (Isis) would “not involve American combat troops”. This week General Dempsey, the chairman of the joint chiefs of staff, said that’s exactly what he would be “recommending” if air power didn’t work.

If “work” means destroy Isis’s grip on western Iraq and eastern Syria, it won’t. So expect the new war that Chuck Hagel, the United States defence secretary, says will last several years to ramp up in the months ahead. Obama stuck to his formula this week. But there are already 1 600 US military “advisers” on the ground. Special forces will no doubt be back in serious numbers before long.

The final cue was given by the repulsive video beheading of US and British journalists and aid workers by the sectarian fundamentalist group.

Their Isis executioner declared that the atrocities were in retaliation for the 160-odd American air attacks since early August, and Britain’s arming of their Kurdish opponents.

Forget the sobering fact that the Western-backed Saudi regime has beheaded dozens in public in recent months, including for “sorcery”.

Calculated acts
Such calculated acts of gruesome cyber-terror softened up the US public for the renewed bout of Western warmaking in the Middle East they have until now resisted – which appears to have been exactly Isis’s aim. Now the US president has bowed to relentless pressure to go back to war in Iraq – the country he was elected to withdraw from. Of course, it’s supposed to be different this time: “surgical strikes” and covert forces in support of Iraqi and Kurdish troops instead of invasion and occupation.

But Isis’s main base is in Syria, not Iraq. So Obama is also gearing up for an illegal bombing campaign in Syria and the training of an extra 5 000 “moderate rebels” – who US officials privately concede “don’t really exist”. Naturally, it’s all been nodded through by another coalition of those more or less willing to bypass the United Nations Security Council.

So a year after the US and its allies planned to bomb Bashar al-Assad’s forces, they’re now planning to bomb his enemies. British Prime Minister David Cameron is preparing to ratchet up Britain’s role in the campaign as soon as the Scottish referendum is out of the way, with the Australians and French chafing to join up too. There’s even talk of setting up new British military bases in Gulf states such as the United Arab Emirates, Oman and Bahrain to bolster the war against Isis.

What has been launched by the US and its allies this week is in effect their third Iraq war in a generation. It follows the US-led war to expel Iraqi forces from Kuwait in 1991 and the cataclysmic US-British invasion and occupation of Iraq in 2003. Now Obama has launched yet another intervention to rid the country of the direct consequences of the last one.

It doesn’t take a strategic mastermind to grasp that it is energy wealth that has made Iraq the object of such huge military force. But the results haven’t been disastrous in terms of carnage and destruction only.

Even in its own terms, Western warmaking has failed. The invasions of former US president George W Bush and former British prime minister Tony Blair demonstrated the limits, rather than the extent, of US power. Obama’s war on Isis looks more like the Afghanistan war launched in 2001, supposedly to destroy al-Qaeda and the Taliban. The result spread al-Qaeda across the region and turned the Taliban into a guerrilla army of resistance.

Taliban in control
Thirteen years later, the Taliban controls large parts of Afghanistan and most Nato troops are on their way out. Al-Qaeda has been eclipsed by the even more extreme Isis, which mushroomed out of the Western-sponsored destruction of the Iraqi and Syrian states. Something similar is happening in the chaos bequeathed by Nato’s intervention in Libya three years ago.

We’re now witnessing a replay of the war on terror, more than a decade after it was demonstrated to fuel terrorism rather than fight it. Since 9/11 the US has launched 94 000 air strikes: most against Iraq and Afghanistan, but also Libya, Pakistan, Yemen and Somalia, killing hundreds of thousands of civilians in the process.

Obama refers approvingly to the drone and special-forces campaigns in Yemen and Somalia as a model for his new war in Iraq. But they haven’t just killed large numbers of civilians. They have been a recruiting machine for al-Qaeda and al-Shabab, and fanned civil war. And that’s what’s happening in Iraq, where US-backed attacks by government forces this month killed 31 civilians, including 24 children, in a school near Tikrit.

Right now Isis is a threat to Iraqis and Syrians and offers them no viable future. But as Obama has conceded, a group that’s more interested in controlling territory as a fantasy caliphate than al-Qaeda-style global jihad poses no direct threat to the US or Britain. But with renewed intervention it could become one.

The crisis in the Arab world doesn’t just reflect the Shia-Sunni schism inflamed by the Iraq occupation, but also the continuing West-backed rule of dictators in both the Gulf and North Africa, from Egypt to Saudi Arabia.

The alternative to Obama’s new Middle East war is concerted pressure for a UN-backed agreement between the main regional powers, including Turkey, Iran and Saudi Arabia, to wind down the Syria conflict and back a genuine unity government in Iraq. An end to Western support for the Egyptian dictatorship would also help.

Bombing will not destroy Isis, but win it sympathy, or even cause it to mutate into something worse. Only Iraqis and Syrians can defeat Isis. But the US remains determined to keep control of the Middle East, while being unable to find a stable way of doing it. So its response to every failure of intervention is more intervention. The US and its allies are at the heart of the problem in the Middle East, not the solution. – © Guardian News & Media 2014