Knives out for wolf of Hong Kong 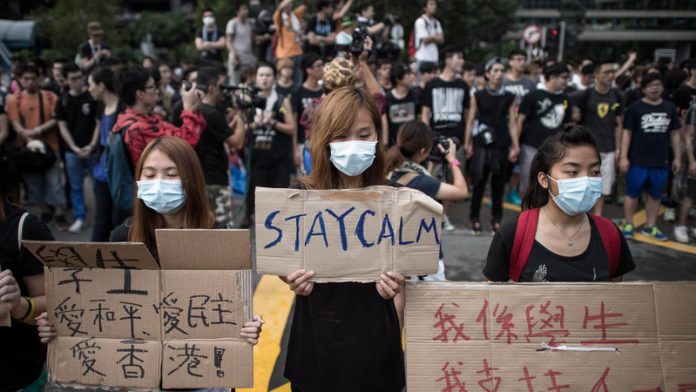 The Hong Kong leader who has become a lightning rod for protests about the territory’s future is a bland but ruthless Beijing loyalist, who is widely believed to have built his political career on membership of the underground communist party. Leung Chun-ying is particularly resented for blocking progress towards the universal suffrage that Hong Kong was promised under the terms of its 1997 handover to China. One of his nicknames is “689”, a derisory reference to the number of votes that earned him his job.

The chief executive is still chosen by a small electoral college drawn largely from Hong Kong’s pro-Beijing elite. Leung won in 2012, after a dirty, turbulent campaign that helped to earn him another unflattering moniker.

“People call him wolf; he’s seen as unprincipled and rapacious,” said Louisa Lim, a Hong Kong native and author of People’s Republic of Amnesia, a book about the 1989 Tiananmen protests. “He’s very slick, definitely a politician, but beneath the slickness there is little substance and I think Hong Kong people feel he has not defended their interests.”

The son of a policeman who grew up in a cramped block of flats with a shared bathroom, Leung was once dubbed the “working-class emperor” for his rapid rise to wealth. But he has done little for the territory’s poor since he came to power. Problems from an acute housing crisis to heavy pollution levels have only festered, and there is little sense that he has any concern for ordinary residents.

Henry Tang, his main opponent during the election campaign and a former chief secretary of Hong Kong, accused him of advocating the use of riot squads and tear gas to crack down on mass protests in 2003, which eventually led to the ousting of Hong Kong’s first chief executive.

Leung denied it but, in a dramatic televised exchange, Tang said he personally heard his rival espouse a hardline stance. “This is my home ground; I was at the meeting. Many people heard what you said.”

Illegal construction work
Tang was dealt a blow in the election campaign by the discovery of illegal construction work at his home, but after the campaign was over Leung was also found to have built illegally at his property. He professed ignorance, but many wondered whether a man who trained as a surveyor and made his fortune in property could really be that naive.

When Leung was made leader of Hong Kong, the website of the Chinese government’s mouthpiece, the People’s Daily, put up a biography of “Comrade” Leung.

For many the choice of an old-fashioned communist title, not used for previous chief executives, was confirmation of what they had long suspected: that Leung was not just close to Beijing but also a secret member of its ruling party.

A recent memoir by Florence Leung Mo-han also named Leung as a fellow member of the communist underground. The book can be hard to find in Hong Kong bookshops.

Leung has repeatedly denied that he is a member of any party and signed a written declaration that he was never part of the communist underground, but it has done little to dispel suspicions that were fuelled by his rapid rise to political power.

Loyalty may count for little if it is the price of stability. But Beijing may be wary of nudging him out of office just to dissipate the current protests, because it would do little to address the grievances underlying demands for Leung’s scalp.

“He is really a cipher in all this, a token representative,” said Philip Bowring, a Hong Kong-based commentator and former editor of the Far East Economic Review. “His resignation in itself doesn’t mean anything at all, if what you are looking for is a pushing back of Chinese intervention in Hong Kong affairs.” – © Guardian News & Media 2014

The ethics of Covid-19 status disclosure: To tell or not to tell?