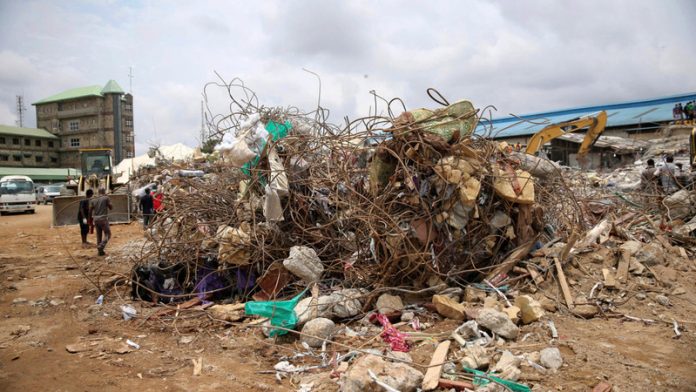 Arrest TB Joshua for his role in hostel tragedy

It is time the authorities in Nigeria did the right thing and arrest Temitope Balogun Joshua, the self-styled general overseer of the Synagogue Church of All Nations. Here is why:

On Friday September 12 2014, a guest hostel located within the premises of Joshua’s sprawling church in Ikotun Egbe, Lagos, collapsed. The most recent media reports put the death toll from the calamity at 115. So far, rescuers have pulled out more than 100 survivors from the rubble.

Because Joshua’s church has always drawn an international audience, the continental profile of the list of victims is hardly surprising. For instance, at least 84 South Africans have been confirmed dead. There are also Nigerians and citizens of other African (and possible non-African) countries among the dead.

Joshua has done everything humanly possible to cover up the truth about this tragedy.

First, in the first three days after the incident, he illegally barred officials of the National Emergency Management Authority from accessing the site and rescuing survivors.

Second, while this illegal interdiction was in effect, Joshua attempted to dictate the narrative and deflect possible culpability by blaming the incident on a mysterious “small plane” that had purportedly hovered above his church complex moments before the collapse. Claiming that he and not his church building was the target of the alleged attack, he even released “exclusive” footage of the “strange” plane.

Third, as public anger mounted in South Africa, Joshua declared the dead “martyrs of faith” and sought to change the subject by promising to “take his teachings” to the country every month for the foreseeable future.

Fourth, an audio recording has just emerged of Joshua paying a gathering of journalists 50 000 naira each in exchange for suppressing the truth and privileging his version of events. The recording, the authenticity of which has not been challenged, was released by Nicholas Ibekwe, a Premium Times correspondent who was present at the meeting.

Joshua obviously recognises that the version of events he is seeking to promote is implausible, hence his latest attempt to manipulate public opinion by influencing journalists.

He should not be allowed to get away with it. His entire conduct since the news broke has been that of a man who feels that he is accountable to no one, and who is too preoccupied with his image as a “man of God” to worry about the many victims of this tragic incident, whether injured or dead. His attempts to portray a collapse that probably has to do with failure to comply with building regulations as a personal attack is an example of his self-promotion and is nothing short of callous.

Yet if Joshua has comported himself as one above the law, it is precisely because the Nigerian state has offered him every licence to do so. In this, neither President Goodluck Jonathan nor Governor Babatunde Fashola has covered himself in glory. The president’s visit to the scene of the collapse, when he commiserated with Joshua, was painful to watch. Why would the Nigerian president visit and express solidarity with the leader of a church who should be a person of interest in an ongoing police investigation? And is this the same president who does not know the way to Chibok?

Whatever his motive, the president strengthened Joshua’s arm, gave him the assurance of presidential protection and threw the police investigation into jeopardy. In the same vein, the cloak-and-dagger nature of the meeting between Fashola and Joshua can only have comforted the latter. Nigerians deserve to know what transpired during their meeting and whatever assurances, if any, Fashola gave Joshua.

That said, Fashola is putting at risk his own hard-earned reputation for transparency and legality. Simply put, if there were visits they should have been to the hospitals where the injured are being treated and the homes of the deceased. The site should have been barricaded by the relevant authorities – the police, town planning and so on – to secure evidence. The presumption ought to be that, even if it is not immediately clear that a crime has been committed, something definitely has been remiss in the entire tragedy. Getting to the root of the matter should be the only concern, next to solicitations for the welfare of the survivors.

We cannot resurrect the dead – we leave that to Joshua, who claims to have such powers – but it is a duty we owe to their memory that the truth of this matter is not buried with them. Therefore, it is important that the police and other investigative agencies be given the necessary backing (both financial and moral) in order to carry out their duties. Joshua is a person of interest, not for his callousness but for his cynical and persistent attempts to obliterate the truth and pervert the course of justice.

The police should arrest him. Today. At a minimum, he should be declared a person of interest regarding a crime scene and be invited for a “chat”. – Olufemi Taiwo, Cornell University, Ithaca, New York; Ebenezer Obadare, University of Kansas, Lawrence; Akin Adesokan, Indiana University, Bloomington; Wale Adebanwi, University of California, Davis; Tejumola Olaniyan, University of Wisconsin-Madison, Madison