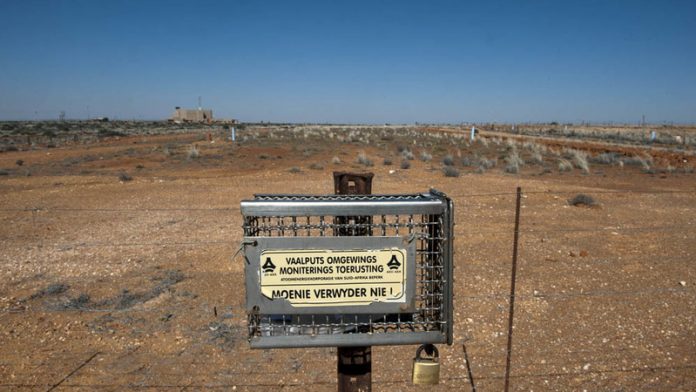 In 300 years, South Africa’s Vaalputs nuclear waste site – a 10 000ha reserve in the dusty Northern Cape – will be opened for unrestricted use. Until then, it needs to be guarded and monitored; no small feat considering that if the 1820 British settlers had buried nuclear waste on their arrival, we would still be guarding the site.

About 100km from the town of Springbok, a warm wind raises dust from the ground, which has not seen rain in many months. Eight metres underground, concrete and metal drums containing low- and medium-level nuclear waste are biding their time, as the natural and sparse shrubbery reclaims the surface of the trenches they were buried in.

This is one of the major question marks over nuclear technology: What do we do with the waste?

Time is “the only thing that renders radioactive waste harmless so, in a way, we have to manage time”, Ewoud Verhoef, the deputy director of the Netherlands’s nuclear waste regulator, told the International Atomic Energy Agency’s (IAEA’s) scientific forum on nuclear waste last month in Vienna.

But not all types of nuclear waste are equal. At Vaalputs, which is operated by the South African Nuclear Energy Corporation (Necsa), they only accept low-activity nuclear waste, says Willem Beukes, stakeholder manager at the facility. This includes contaminated items such as clothes and equipment from Koeberg, the country’s nuclear power station, and the research reactor at Pelindaba. On arrival by truck, the metal and concrete containers are inspected and, “if it does not meet criteria and is noncompliant, it is sent back”, he says.

Licences suspended
This has happened before. In August 2012, the National Nuclear Regulator, which oversees nuclear activities in the country, suspended the licences of both Eskom and Necsa to deposit low-level waste at Vaalputs because of noncompliance. These licences have since been reinstated.

But the urgent question posed at the scientific forum in Vienna was what to do with the more dangerous high-level waste. For South Africa, with its plans to build a nuclear fleet to generate an additional 9 600MW of electricity, about 23% of the country’s power requirements, this issue is even more pressing.

Koeberg and Pelindaba’s high-level nuclear waste remains on site and is not moved. According to South Africa’s 2011 report to the Joint Convention on the Safety of Spent Fuel Management and on the Safety of Radioactive Waste Management, “used fuel from the Koeberg nuclear power station is currently stored in authorised used fuel pools on the site as well as in casks designed and constructed for storage of used fuel”.

The report states that “the Koeberg site has enough storage capacity for the used fuel that will be generated during the current operational lifetime of Koeberg nuclear power station. The used fuel from the Safari-1 research reactor is initially stored in the reactor pool for at least two years to facilitate cooling of the used fuel prior to it being transferred to an authorised dry storage facility on the Pelindaba site.”

But “it is recognised that the current storage capacity at the Koeberg and Pelindaba sites [is] finite and the practice of storing used fuel on a reactor site is not sustainable indefinitely”.

So what will happen to the nuclear waste from the country’s proposed 9 600MW nuclear build?

“Finally, it will be disposed of in a deep geological repository if there is no need for it to be reprocessed and recycled.”

In terms of the low-level waste, he says that Vaalputs’s disposal capacity “can easily be increased to more than 10 times the current capacity, which will be more than adequate to accommodate an increase in nuclear waste associated with additional nuclear power plants”.

The cleaning equipment in the large hall at Vaalputs where the trucks arrive to offload the metal and concrete barrels. These barrels are analysed to ensure that they meet specifications and are not contaminated.

IAEA director general Yikiya Amano told the Vienna forum that the “technologies to deal with nuclear waste are not yet licensed, but much technology is almost ready”.

These technologies include better and more efficient use of nuclear fuel (when using uranium fuel rods, only a small percentage of the uranium is used), new fuels (such as thorium) and advanced reactors and fuel cycles that reduce the storage time required from hundreds of thousands of years to a few hundred years.

Most nuclear waste is created by nuclear power plants, which are responsible for more than 12% of the world’s electricity production, according to Djarot Wisnubroto, the chairperson of the National Nuclear Energy Agency of Indonesia (Batan). An open-cycle nuclear power plant generates about 20 tonnes of used fuel a year.

Reduced waste
But Gerald Ouzounian, the international director of Andra, France’s nuclear agency, says that this quantity of waste can be reduced by compression and reduction technologies to about 2.5m3 of high-level waste and the same amount of intermediate waste a year.

Research and education, agriculture, medicine and the decommissioning of nuclear weapons plants, which can take decades, also add to the nuclear waste load.

Batan’s Wisnubroto told the forum that more than 30% of the tools used in medicine use some form of radioactive material.

South Africa is one of the world’s leaders in radioisotope production, chemicals that are used to diagnose various cancers. But most of this waste is either stored on the Pelindaba site, where the radioisotope manufacturing takes place, or at Vaalputs.

After nearly 30 years of storing waste at Vaalputs, the dusty, hot site is still only 5% full. “If we need more trenches [to bury the waste], [Necsa] budgets for it” and they are dug, says Beukes. The site will be decommissioned in 2035. It will then be actively guarded for another 100 years, passively guarded for 200 years and then, 300 years after decommissioning, the site will be released for unrestricted use, he says.

But this is only a solution for low-level waste. As Carl-Magnus Larsson, the chief executive of the Australian Radiation Protection and Nuclear Safety Agency, said: “We must remember that storage is an interim solution until final management and disposal … it remains a temporary measure.”

The International Atomic Energy Agency’s guidelines published in 2009 define six different types of nuclear waste, each with its own suggested disposal method, determined by how dangerous the waste is to humans and the environment, how much heat it generates, and its reaction to water and temperature.

Ansie Vicente was a guest of the IAEA in Vienna.

What does SA plan to do with its toxic nuclear waste?

Editorial: Poisoning of the Karoo