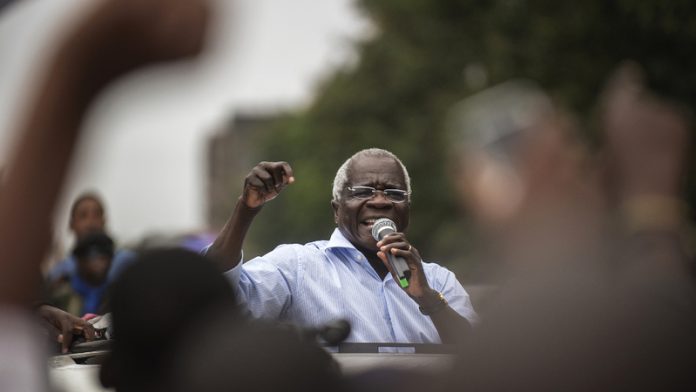 Mozambique’s charismatic opposition leader Afonso Dhlakama on Saturday said he was confident that the upcoming presidential election will be the country’s first free vote, after he fought to have the electoral laws changed.

“I believe these are the first elections with credibility and even transparency, if everything goes according to the law,” Dhlakama told Agence France-Presse after a day of whistlestop rallies in the capital.

“These elections are for me the first … [to] provide tools to facilitate a change-over of power.”

The former rebel leader, who only emerged from the bush a month ago to sign a peace pact with the government, has lost four previous presidential bids.

After blaming his defeats on stolen elections, an electoral overhaul has seen the 61-year-old hit the campaign trial with renewed vigour.

“Even those my hair is white, I am still young. I have been in this fight for democracy in Mozambique since 1977,” he said.

His Renamo party this year strong-armed the government into adopting new electoral laws allowing for greater opposition party presence in the electoral commission.

“Now the parties have the possibility to put their men to monitor the vote,” said Dhlakama. But he was quick to sound a note of caution: “I have confidence, except Africa is Africa and people prepare themselves to cheat.”

As the most recognisable of the three presidential candidates, Dhlakama has drawn huge crowds wherever he goes, wooing voters with promises of greater equality in the gas- and oil-rich nation.

“There are millions of people who are promising to vote for me,” he said.

But Dhlakama warned there could be consequences if the election does not reflect the people’s will.

“If they go to vote and find their votes are stolen, I am certain these people will be able to demand justice,” he said.

“If a party or a government steals votes of the majority, it’s this majority that will demand justice, not me as Afonso Dhlakama.”

Escorted by a dozen uniformed and armed bodyguards, Dhlakama’s convoy drove through the capital Maputo on Saturday to drum up support.

Despite the rain, crowds danced, greeting him with chants of “Hey papa, hey papa” as he made his way through the traditional fiefdom of the ruling Frelimo party.

Along Guerra Popular, one of the main avenues of downtown Maputo, scores of mostly youthful supporters filmed the ex-rebel leader with their cellphones and raised their right fists in a show of approval.

“Here’s a person with courage and determination,” said 21-year-old Fernando Lazaro, who was injured in a recent ambush by suspected Renamo fighters in central Mozambique.

“He wants the population to live well. Frelimo likes to eat alone, not him. He wants us to live well”.

Growing social inequality and high unemployment is fuelling discontent especially among young Mozambicans, many of whom did not experience the ravages of the 16-year civil war that ended in 1992.

Dhlakama, who led that guerilla war, returned to the bush in October 2012, sparking a new but low-level insurgency in central Mozambique.

After signing a new peace pact with the Frelimo government last month, he now fashions himself as the voice of the poor.

“I appear as the spokesman for the poor … that’s why there are these crowds,” he told AFP.

“People believe that I can set in motion a democratic change of government.”

Speaking through the sunroof of a four-wheel drive on the muddy streets of the working class neighbourhood of Xipamanine on the outskirts of Maputo, Dhlakama promised jobs, justice and an end to poverty and corruption.

He received a rowdy welcome at a crowded street market, where fruit and vegetable vendors chanted and banged on empty buckets to cheer him on.

Buoyed by the crowd, the sexagenarian, who spent the past two years living rough in a remote bush camp, even managed a few dance moves in front of his supporters.

The reception was frostier in some of the outlying suburbs however, where few lined the streets to see his passing convoy and where banners flew in support of his Frelimo rival, Felipe Nyusi.

Despite being relatively unknown, former defence minister Nyusi is widely expected to beat Dhlakama and former mayor of Beira city Daviz Simango in the upcoming vote.

The Frelimo party has been in power since Mozambique won independence from Portugal in 1975.

The current president, Armando Guebuza, is stepping down after serving the maximum two terms. – AFP

More than 300 000 people in the north of the country have been displaced by militants who ransack villages and then burn them down.
Read more
Africa

Mozambican authorities must stop the attack on media freedom

When journalists stop telling the truth about what’s going on in their country, when they stop exposing wrongdoing and corruption allegations, everyone suffers
Read more
Africa

Can Frelimo and its backers continue to profit from a failing state while an armed insurgency rages in northern Mozambique? And will South Africa help prop them up?
Read more
Advertising