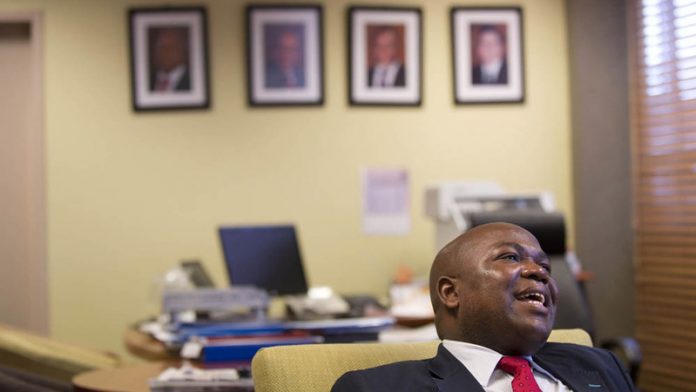 Four months after President Jacob Zuma announced an inquiry into prosecutions boss Mxolisi Nxasana’s suitability for his position, the National Prosecuting Authority (NPA) is on the brink of paralysis while the two men remain deadlocked over a golden handshake.

The probe into Nxasana’s fitness was prompted by the State Security Agency declining to grant the national director of public prosecutions security clearance because of charges, including murder, that were levelled against him years ago. He was acquitted of murder.

In terms of the NPA Act, the president can only fire the prosecutions head after such an inquiry and with the approval of MPs.

According to four independent sources close to the process, Nxasana demanded a R7.5-million settlement, the amount that was offered to one of his predecessors, Vusi Pikoli.

Zuma apparently offered R5-million because of Nxasana’s short tenure. He was appointed just over a year ago. But Nxasana has not signed the offer, thus prolonging the stalemate.

Discussions over the golden handshake were triggered by the president’s fear that he could lose the case in court. Nxasana has threatened to invoke the court’s intervention to settle the matter.

He warned his staff three months ago, according to an NPA official who attended the staff meetings, that he would not leave without a fight and would challenge Zuma should the president remove him unprocedurally and unfairly.

Shown the door
Nxasana is the third prosecutions boss to be shown the door in the past five years after Menzi Simelane’s appointment was invalidated by the Supreme Court of Appeal and Pikoli was fired by Zuma’s predecessor, Kgalema Motlanthe.

Ironically, Nxasana and Simelane were brought in by Zuma amid negative public reaction partly because of Simelane’s questionable track record and Nxasana’s lack of prosecutorial experience.

Two weeks ago, presidential spokesperson Mac Maharaj avoided questions regarding the golden handshake. He was only prepared to say: “The president has recently met [Nxasana] and they agreed to meet again to take matters forward.”

On Wednesday, Maharaj reiterated that Zuma is still in discussions with Nxasana.

NPA spokesperson Nathi Mncube confirmed two weeks ago that Nxasana had met Zuma “to provide information that [Nxasana] feels was never placed before the president when the decision to initiate the inquiry was taken”. He said the process is ongoing.

He also evaded the Mail & Guardian‘s direct question on a “financial settlement”.

On Thursday, Mncube initially said nothing had changed from his fortnight-old statement. “It’s just the same response, except to say they are in discussions with the president. That’s it; that is what I was going to add.”

He later denied that a financial settlement is on the table but, interestingly, said that “we are not privy to the discussions and he would not disclose”.

“You will have to ask the president, but there has been no settlement and no offer in terms of Mr Nxasana.”

Zuma told the National Assembly in August that he had met Nxasana and that the prosecutions boss had tabled certain issues to which he was “still applying my mind”.

The Democratic Alliance this week marked 100 days since Zuma announced the inquiry.

Glynnis Breytenbach, the party’s spokesperson on justice and herself a former NPA official who was entangled in the factional battles at the institution, said: “I will therefore be writing to President Zuma to challenge him to end this dithering and announce the terms of reference that will inform this probe.”

Meanwhile, the NPA is still rocked by infighting and is facing managerial paralysis as strategic meetings are said to be taking a back seat pending Zuma’s decision.

“We never had our quarterly meetings to review our business. In most meetings, Nxasana appears noncommittal and tells his executives that he is uncertain about his future,” said a source close to the organisation.

Two camps in limbo
The impasse has left the two camps – those loyal to Nxasana and Zuma’s supporters – in limbo, affecting morale and intensifying hostilities.

Both sides seem to be frustrated by Zuma’s inability to finalise the leadership matter, while Nxasana supporters are worried about the possible political interference should he agree to go without exposing “the real motivation behind the plot to oust him”.

“An inquiry seems the best platform to display these conspiracies and lies,” said an NPA official who spoke on condition of anonymity.

A government official who is close to Zuma and has intimate know-ledge of the settlement told the M&G that “we cannot understand why the president is not going ahead and suspending [Nxasana].

“[Zuma] has shown his sincere willingness to negotiate and meet his ridiculous demands. It’s about time he suspends him and proceeds with the inquiry. The terms of reference are ready and clear. Why did he announce the inquiry in the first place if he’s such a coward to take a decision?” said the government official, adding that “the president is being misadvised by [his legal adviser Michael] Hulley”.

It is understood that Hulley – who is also credited for recommending Nxasana to Zuma for the post of prosecutions head – advised against the suspension despite the NPA Act stating that the president can suspend him pending an inquiry.

Hulley refused to comment yesterday, referring all questions to Maharaj.

“I suggest that he is the appropriate person and, if I can make a further suggestion, if you send your questions through to him, I will liaise with him to the extent that he may need my input,” he said.

The official’s view of Hulley corresponds with that of some of Zuma’s ministers and directors general, who are critical of his legal counsel regarding the NPA and the president’s other political blunders.

Escalating tensions
While NPA employees continue to endure an ugly leadership tussle and instability, tensions between Nxasana and his deputy, Nomgcobo Jiba, are escalating.

Nxasana instituted a committee, chaired by retired judge Zak Yacoob, to investigate factional squabbles and the leaking of information.

The M&G can reveal that Jiba – whose short tenure as acting prosecutions director was equally mired in controversy – has refused to co-operate with the committee.

In terms of the law, Nxasana can neither suspend nor fire her. The process to remove a deputy director also involves a strenuous formal inquiry and the president’s decision to axe her would have to be ratified by MPs.

A Jiba sympathiser says Nxasana’s “refusal to take the settlement” is a delaying tactic to deal with his rivals, such as his deputy.

“He wants to clean the NPA before he leaves so that his people can reign supreme in his absence,” said the source.

Nxasana’s ‘purge’
The source cited the decision to part ways with former NPA head of security Tshilidzi Ramahana, who is also seen as a Jiba loyalist, as an indication of Nxasana’s “purge”.

Ramahana was also offered a golden handshake after he was suspended in June for refusing to write to Zuma, on the instruction of NPA chief executive Karen van Rensburg, excusing Nxasana’s failure to comply with security clearance procedure.

But the NPA’s Mncube said two weeks ago that Ramahana was charged and a disciplinary hearing was underway. During the hearing, Ramahana indicated that he was prepared to consider a settlement.

“The terms of the settlement with Mr Ramahana are confidential and therefore both parties are bound by that confidentiality,” Mncube added. – Additional reporting by Moshoeshoe Monare