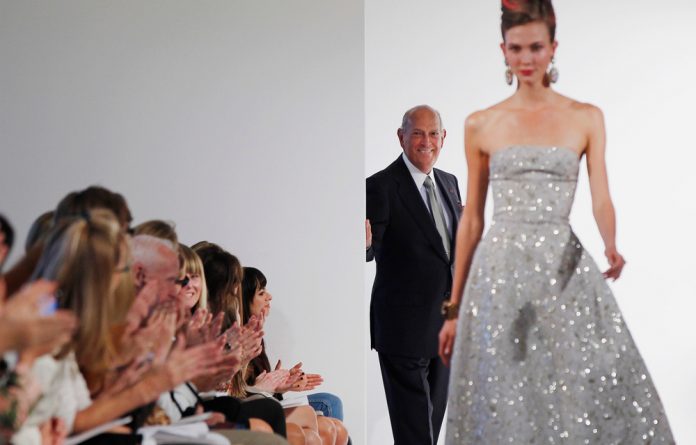 A sophisticated, sartorial choice for A-list movie stars on the red carpet and wealthy socialites, he was also the go-to man for something elegant for actress and fashionista Sarah Jessica Parker, of Sex and the City fame.

The designer reportedly passed away at his home in Connecticut, having worked right up to the end of his life.

The cause of death was not immediately clear but he had been diagnosed with cancer a number of years ago. Earlier this month, British-born designer Peter Copping was announced as creative director of the Oscar de la Renta company.

On Monday night De la Renta’s company website bore only his trademark signature in white against a navy blue background.

De La Renta himself was photographed in October’s edition of American Vogue alongside Amal Clooney trying on her wedding dress in his New York studio.

Tributes quickly poured in from around the world mourning the loss of one of America’s most eminent designers.

Eponymous label
Born on July 22 1932 in the Dominican Republic to a Dominican mother and Puerto Rican father, he travelled to Spain at 18 to study in Madrid and worked as an apprentice to Cristobal Balenciaga.

In 1960 he moved to France to become an assistant at Lanvin in Paris, where he embedded himself in the world of haute couture, before moving to the US to work for Elizabeth Arden.

He created his eponymous label in 1965 and became one of the most lauded designers in New York, where he was twice president of the Council of Fashion Designers of America (CFDA).

The CFDA honored him with a string of awards, including a lifetime achievement prize in 1999.

In a career that spanned five decades, De la Renta saw his company grow into a multi-million-dollar empire that included ready to wear, fragrance, a home line and a bridal collection, which he launched in 2006.

He married twice, first in 1967 to Francoise de Langlade, an editor at French Vogue and in 1989, six years after her death, he married American publisher Annette Reed. – AFP