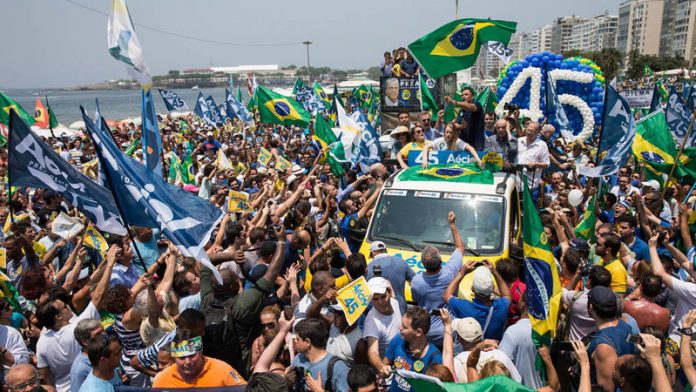 When Brazilian voters elect a president this weekend, their choice could not be starker. In one corner is the incumbent, Dilma Rousseff, a former Marxist guerrilla who was imprisoned and tortured in the 1970s for her efforts to overthrow the military dictatorship.

In the other is Aécio Neves, a pro-business political aristocrat who grew up with a playboy reputation but now hopes to fulfil the destiny of his grandfather, who was elected president but died before he was sworn in.

With poll after poll showing them statistically tied, nobody knows whether the winner on Sunday night will be from the left or the right. One thing, however, is certain: the next president of Brazil will be from Minas Gerais.

Although it is one of the country’s biggest, most populous and wealthiest regions, Minas Gerais does not have São Paulo’s muscle, Rio de Janeiro’s beauty, or the tourist appeal of Amazonia and Bahia.

But in the heated countdown to Sunday’s presidential election, it is increasingly the focus of the campaign strategies and historical narratives of the two candidates.

Both candidates were born in the state capital of Belo Horizonte, but that shared starting point aside, they could hardly have had more different backgrounds as a visit to their childhood homes and student haunts reveals.

Neves spent much of his youth in São João del Rei, a picturesque town built during the 18th-century mining boom, when Minas Gerais produced half the world’s gold. His family’s baroque home – one of the town’s oldest – is adorned with bougainvillea and overlooks the central square. Its elegant garden stretches far back up the slope and contains a swimming pool and separate lodgings for guests and staff.

The candidate’s grandfather, Tancredo Neves, was a prime minister and leading figure in the movement to end the dictatorship ushered in by a military coup in 1964. A memorial museum in the town depicts how he was elected as the first president after the return of democracy in 1985, but succumbed to illness before his inauguration. A video of the state funeral shows huge crowds of weeping mourners as the coffin passes by.

Neves’s father – also a congressman – was, however, a supporter of the dictatorship, prompting intense family debates. His sister Andrea Neves credits this experience for her brother’s conciliatory nature.

“He lived on one side with our father and on the other with our grandfather. Their political positions were very different, even antagonistic. But they remained respectful, even affectionate. I think that taught us something very important. It’s why Aécio always says opponents are adversaries, not enemies,” she said.

Andrea is a powerful figure in the Neves campaign team and has led his communication strategy. Aides and friends are on message when they stress that Aécio is a good mediator – typical, they say, of the “Minas way” of politics, which is supposed to be non-confrontational. That has not been very evident in recent televised debates between the two Minas-born candidates, who have traded personal insults, accusations of lying, corruption and incompetence.

Neves’s political opponents have focused their attacks on the construction of an airport on the family’s land, the appointment of more than half a dozen cousins and other relatives to government posts, and rumours that he is a playboy who spends most of his time in Rio, used cocaine and beat his model girlfriend before they were married – accusations which he denies.

Last week, Neves announced that he would sue the president’s team for defamation for trying to run a 30-second TV slot suggesting he is disrespectful to women. Rousseff, meanwhile, is proud of being a fighter rather than a conciliator. Although she was brought up in a middle-class family, the daughter of a Bulgarian entrepreneur, she enjoyed none of the trappings of privilege of the Neves household. Her family’s modest home, which has since been sold and converted into a commercial kitchen, is just another unremarkable urban building in the sprawl of Belo Horizonte. Thirteen years older than Neves, she is also the product of a different, more radicalised era. As a student in the 60s, she campaigned locally at first for better street lighting, and then, during the 21-year dictatorship, for revolutionary change in Brazil’s politics.

Apolo Lisboa, a comrade from her early days in the clandestine Marxist group Política Operária (Workers’ Politics, or Polop), recalls Rousseff as a familiar figure among the activists who held debates on the Vietnam war and fundraising parties dancing to Tropicália music.

“Dilma was better at debating than dancing, but she was not very good at public speaking. She wasn’t really a leader of the masses. She was more of an organiser,” he said over a beer at the centre, which still boasts a cinema and debating area.

Guerilla group
As the political climate grew more charged, Rousseff left Polop and joined a guerrilla group that robbed banks and took hostages. Today, activists of the ruling Workers’ Party – Partido dos Trabalhadores, or PT – hark back to the era of class struggle with red T-shirts printed with Rousseff’s bespectacled student activist-era portrait even though there was a limit to her involvement.

“She wasn’t involved in the attacks because her myopia made her a liability,” said Lisboa. “Her glasses were like bottle-bottoms. If they had broken during an action, she would have been useless.”

But the future president was involved in planning and organisation, until she was arrested with a gun in her handbag in 1970. She was sent to Tiradentes Prison, which was nicknamed the Tower of the Maidens because most of the prisoners were young women. The guards tortured her with electric shocks, sexual abuse and beatings. Rousseff said later that she still had trouble chewing because of the damage to her jaw.

But she was described by fellow inmates as a source of strength. “When other women were being taken off for torture, she was very supportive. And she always remained resolute. By lying under torture, she saved lives,” said Eleonora Menicucci, a close friend from Rousseff’s teenage years who is now minister for women. “What happened in prison, we never forget.”

After she was released, Rousseff married a fellow revolutionary and moved to the southern state of Rio Grande do Sul where she built a career as an economist, administrator and then minister and chief of staff in the PT government of president Luiz Inácio Lula da Silva. The first election of Rousseff’s life was for the presidency after he surprisingly chose her as his successor in 2010.

Neves, by contrast, has had a long apprenticeship in the family business of winning votes. The young, handsome member of Brazil’s most powerful party – the PSDB (Social Democrats) – was elected to the lower house of congress in 1986, governor of Minas Gerais from 2002 and senator from 2011.

While Rousseff has focused on efforts to reduce inequality by expanding social welfare, raising the minimum wage and fixing energy prices, Neves has proven himself a proficient economic manager, improving efficiency, balancing the books and cutting poverty at a faster than average rate in Brazil.

Whether Brazil should follow the Minas model is now a key topic in the presidential debate, with the PT’s warning that similar “shock economic tactics” would result in job cuts, while the Neves camp claims that their man can provide a much-needed boost to the flagging economy.

Resistance
“He’ll improve efficiency and do more for business. A good economy makes for a strong society,” said Renata Vilhena, who was planning chief under Neves during his time as governor of Minas. “But there is some resistance to this change of culture. People have preconceptions.”

It is hard not to have preconceptions in a contest between an aristocrat and a revolutionary, though when it comes to exercising power, the difference between them may not be as great as their backgrounds suggest.

To win votes, both have veered to the centre ground and they share a commitment to continue Bolsa Família (family allowance) benefits, improve public services and reduce corruption in line with the expectations of the rising middle class. The reality of a fragmented congress also means that whoever wins will be forced to further dilute their agenda in order to build alliances.

In the final week of the campaign, polls suggest the volatile electorate have stabilised along traditional left-right lines, though many voters still admit to uncertainty about which of the visions born in Minas is best for Brazil.

Lisboa, the former revolutionary who counts both candidates as his friends, says of the rivals: “Aécio is a better operator. He is more open-minded, more of a conciliator and more pragmatic in his approach. Dilma is more ideological, more programmatic. I still haven’t made up my mind which of them to vote for.” – © Guardian News & Media 2014

KZN coalition talks may rope in Jacob Zuma for ANC

IEC vows to deliver free and fair elections on Monday