How the early bird recaptured the sky 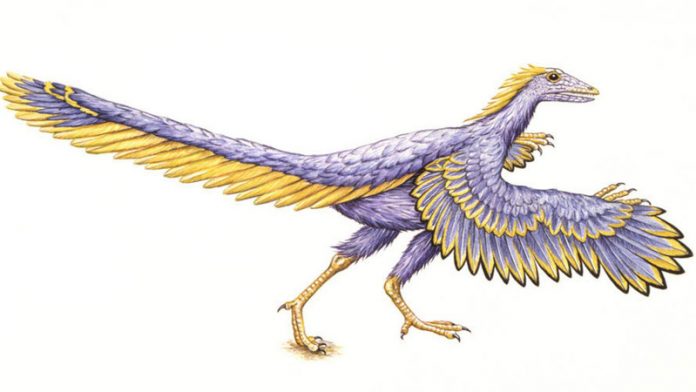 Lightweight foam in the central shaft of feathers could be proof that the earliest bird could indeed fly.

Archaeopteryx, a 150-million-year-old prehistoric bird – revered since its 1861 discovery in Germany as the first flying creature – was grounded, according to two researchers in Britain, by the laws of physics. They theorised that the main feather shaft (rachis) would have been too weak for powered flight.

Lingham-Soliar believes the foam core (essentially air-filled cells) that forms the central shaft of all flight feathers in birds was crucial to the increased strength of the feather shafts in Archaeopteryx, which were slightly thinner than those of modern birds.

A fossil of the first bird, purchased from Germany in 1861 by the Natural History Museum in London and the pride of its collections, was found in a limestone quarry in Solnhofen, Germany. With feathers similar to a bird, but with teeth, claws and a long bony tail like a reptile, it has been widely accepted as evidence of the evolutionary transition from reptiles to birds.

“It was an almost miraculous fossil, as it showed the first evidence that birds originated from reptiles —[with] proof of intermediate features between a reptile and a bird,” said Lingham-Soliar in a recent interview in his office.

“It probably wouldn’t have been the best of fliers but rather shows the beginnings of flight.”

Evidence
The fossil was discovered two years after Charles Darwin published The Origin of Species in 1859 – and appeared to be the first hard evidence of a transitional form between living animals and their alleged ancestors, which Darwin had proposed.

In 2010, however, Dr Robert Nudds from the University of Manchester and Dr Gareth Dyke, who was then at University College Dublin (now at the University of Southampton), jointly released a paper in Science (and a support critique earlier this year), in which they said Archaeopteryx’s feathers were too weak for  flight – toppling  Archaeopteryx from its status as a flier.

Using physics principles based on hollow, thin-walled cylinders, they concluded that the central shaft of the first bird’s feathers would have buckled under the stresses of flight.

But Lingham-Soliar says, in papers published this year in the German Journal of Ornithology, that they made a fatal error: their tests ignored the foam core inside the feather shaft.

The foam core consists mainly of beta-keratin (the keratin of birds and reptiles) along with a small percentage of collagen and, of course, pockets of air.

“The principle of the foam is to take bending stresses but without the weight of a solid. Mechanical tests by many of the top physicists, including most recently German scientists Ingrid Weiss and Helmet Kirchner [of the Liebniz Institute of New Materials in Saarbrucken, Germany] show that the foam core absorbs 96% of the load [buckling] imposed on the feather during flight.”

These two scientists are involved in the biomechanics of natural structures and perform engineering tests to attempt to discover the strength of natural materials. “I have used the laws of physics to dismantle Nudds and Dyke’s arguments,” said Lingham-Soliar.

He also said the study was statistically weak, being based on just a single feather shaft.

Dyke, a senior lecturer in vertebrate palaeontology at the University of Southampton, said there was “100% room for debate” when it came to Archaeopteryx’s ability to fly. “I think Dr Lingham-Soliar’s work is super and an advance on ours. This is how science works!”